#Beijing2022: Winter Olympics a display of propaganda and censorship

The Beijing 2022 games brought top athletes compete to the world stage for one of the most important contests of their lives. But gaze just beyond the podium, and Beijing’s information controls system was on prominent display. 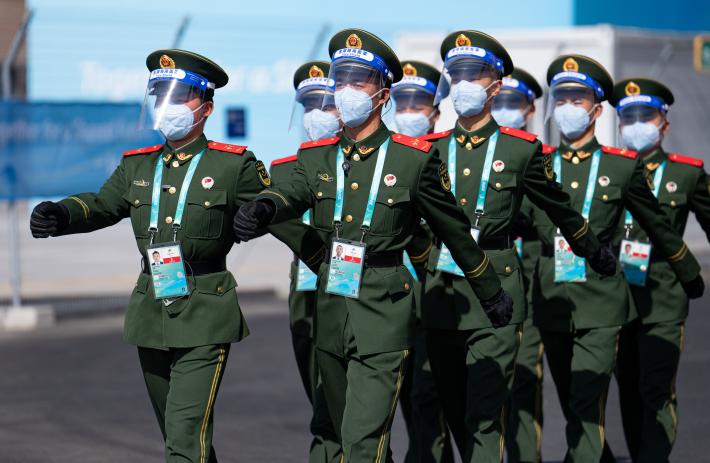 Members of the Chinese Military march through the Paralympic Village at the 2022 Paralympic Winter Games in Beijing, China. (Image Credit: OIS/Thomas Lovelock)

On March 4, as the Beijing 2022 Paralympics opened, Chinese censors were hard at work making sure viewers couldn’t hear pointed antiwar comments made by the president of the International Paralympic Committee about Russia’s invasion of Ukraine. The committee got a taste of what ordinary Chinese are subjected to daily—indiscriminate censorship and a lack of response to their complaints.

The Beijing 2022 games brought top athletes compete to the world stage for one of the most important contests of their lives. But gaze just beyond the podium, and Beijing’s information controls system was on prominent display. From propaganda and manipulated online content, to censorship or arrests for dissenting views, the Chinese government’s hosting of the games was a demonstration in authoritarian control. A series of incidents throughout the games demonstrate how the system works.

Propaganda at home and abroad

The February 4 opening ceremony began with a reminder that the Chinese government was awarded the games despite committing atrocity crimes against Uyghurs and other religious and ethnic minorities. The selection of a Uyghur skier to help light the Olympic cauldron appeared to be an acknowledgement from the Chinese government of the diplomatic boycotts and global denunciations of its human rights abuses. What Chinese propaganda failed to mention was the precarious fate of Uyghurs even with records of government support: Xinjiang police recently confirmed that a Uyghur torchbearer from the 2008 Beijing Olympics is serving a 14-year prison sentence for “watching counterrevolutionary videos.”

In another propaganda act to try and control international outcry about Peng Shuai, the Chinese tennis star who accused a senior official of sexual assault, Chinese authorities staged a controlled interview with the former Olympian and a French media outlet on February 6. The journalist who took part in the interview described the meeting as “propaganda” and said it didn’t prove Peng was safe. A senior Chinese Olympic official was present and translated Peng’s comments, despite her English fluency, to questions that were submitted in writing in advance.

Chinese propaganda outlets also pushed out narratives to preemptively counter any potential criticism of the Party’s “success” in hosting the Olympics. A January 28 article by state-run China Daily and amplified by China’s foreign ministry spokesperson claimed the US government paid athletes to “sabotage” the games. The false claim, issued before the games started, cited unnamed sources claiming that the United States could "incite” athletes to denounce China, or to “play passively in competition and even refuse to take part."

The Chinese government found one US athlete’s comments to be convenient for propaganda and amplified his remarks. After US skier Aaron Blunck remarked at a February 13 press conference that American media coverage of China was false, Chinese state media and diplomatic social media accounts promoted the video in a widespread propaganda campaign that drew participation from Chinese diplomats from Cuba to Australia. Comments by British and Swedish athletes criticizing the government’s human rights record were ignored.

Chinese state propaganda also relied on manipulation to reach domestic and global audiences. A joint investigation from ProPublica and the New York Times found a network of 3,000 inauthentic accounts that had recently been created and had promoted state media propaganda about the Olympics. Twitter suspended more than 800 accounts, which had also deployed widely used hashtags like #Beijing2022 to drown out criticism bearing the same hashtag. An Australian media investigation found inauthentic aspects among viral Weibo posts with hashtags related to the Olympic mascot, Bing Dwen Dwen, which state media boasted was a key part of China’s soft power.

Another investigation found that Olympic videos on YouTube autoplayed propaganda videos promoting the Chinese Communist Party (CCP), as well as anti-China propaganda videos, when users searched for Olympic-related keywords, with some videos gaining hundreds of thousands of views. A researcher in Canada was shown pro-Beijing influencer videos after watching Olympic highlights; recent reports found links between the Chinese government and some influencers. YouTube said most videos about the Olympics were from trusted sources and that others don’t violate its policies.

Despite Beijing’s attempts to push its narrative globally around the Olympics by running paid content in outlets like CNN or paying Western influencers to promote the games, a number of international outlets still used the occasion to continue to cover human rights issues, like China’s persecution of the Uyghurs.

Censorship to dictate the conversation

Restrictions on media reporting from the games demonstrated the extent to which the Chinese government dictated coverage. The removal of a Dutch journalist by a Chinese security volunteer while live on air on February 4 underscored increased restrictions on foreign media in China, as has also been documented in recent reports by the Foreign Correspondents Club of China (FCCC) and the International Federation of Journalists.

Following the closing ceremony, the FCCC put out a statement that reporting conditions at the games fell short of international standards, with journalists being tailed and manhandled, prevented from interviewing athletes, stopped from filming or interviewing residents, and subject to online harassment for their Olympics coverage.

Separately, American-Chinese skier Eileen Gu featured in Chinese propaganda after she chose to compete for China over the United States, but censors rushed to delete criticism of the athlete on Weibo after Gu’s flippant defense of China’s Great Firewall in a February 7 Instagram post. Gu responded to a netizen comment on the social media site, which is blocked in China, by claiming that “anyone can download” virtual private networks (VPNs) because they were “literally free,” even though VPNs are illegal in China and people have been heavily fined and even imprisoned for using them. Some Weibo users mocked her comment, which was screenshotted and shared over 3,000 times on the platform before being censored. A hashtag about Gu not singing along to the Chinese national anthem, which is commonly used in government propaganda, was also censored on Weibo.

Another censorship tactic on display during the games was the suppression of criticism overseas through hashtag manipulation on Twitter. A Wall Street Journal investigation found that pro-China Twitter users had flooded hashtags like #genocidegames that were used by activists to organize against the CCP. Twitter took down some of the accounts, which violated its policies on spam and platform manipulation. While most censorship measures were deliberate restrictions, occasional technical hiccups like briefly blocking access to Olympic websites for foreign media covering the games showed how quickly Beijing’s controls could disrupt international coverage.

Tellingly, most athletes who spoke out about human rights violations in China did so either before or after leaving China, likely because they were afraid to express themselves while there competing. One German athlete pointedly declined to comment while still inside the country but pointedly said she’d speak out after leaving. In a symbolic act, Swedish speedskater Nils van der Poel upon his return home, gifted his gold medal to the daughter of the imprisoned Swedish bookseller Gui Minhai to raise awareness of the Chinese government’s human rights abuses. Prior to the opening ceremony, China’s Olympic committee warned athletes against speaking out with a threat that behavior or speech “against the Chinese laws and regulations,” would be “subject to certain punishment.”

Combined with online and media controls, officials in the mainland and in Hong Kong suppressed activists who attempted to protest during or in the lead-up to the Beijing Olympics. In Hong Kong, police arrested 75-year old activist Koo Sze-yiu on charges of “conspiracy to commit a seditious act” for planning to protest the Olympics on February 4 with a coffin and flags that read “democracy and human rights are above the Winter Olympics,” “down with the Chinese Communist Party,” and “end one-party rule.” Koo was denied bail and remains in custody.

In the mainland, police arrested two prominent human rights activists ahead of the games, and put others under close surveillance or threatened them not to speak out. Others had their WeChat accounts restricted.

Overseas, Chinese security agents threatened the China-based family of a whistleblower living in Germany who plans to publish a book about Chinese state-sponsored doping of athletes during the Olympics in the 1980s and 1990s, according to a February 3 interview with her son. The Chinese government is the most egregious perpetrator of transnational repression as it attempts to pressure and control overseas and exile Chinese.

A test case for information controls

The CCP viewed the games as a measurement of the “success” of its governance system and wanted to push that message out globally. Its mouthpiece, People’s Daily, declared that Beijing 2022 had "set a new Olympic benchmark.” In singing its own praises, the CCP declined to mention authorities’ efforts to control what was heard and said about the Olympics, whether it ranged from criticism of food, weather, accommodation, or serious human rights violations. With Chinese leader Xi Jinping expected to cement a historic third term later this year, the Winter Games has also been a test of how well the information controls system works domestically and globally.

The International Olympic Committee claims the Olympics are a force for peace and development. A peaceful and just world is one in which human rights abusers are denied a place on the world’s stage to whitewash their rights violations.

Angeli Datt is a senior research analyst for China, Hong Kong, and Taiwan at Freedom House.