Belarus is Ready for Change No Matter What Its President Thinks

A diverse civil society is demanding a free Belarus, and preelection protests are only the tip of the iceberg. 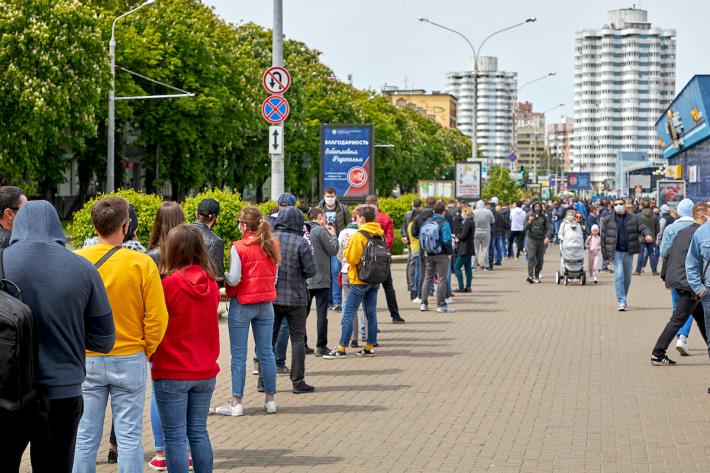 After uneventful presidential elections in 2015 Belarus all but disappeared from foreign policy discussions, only occasionally resurfacing in the context of the Minsk Agreement between Russia and Ukraine. In shortsighted fashion, the United States and European Union (EU) mistook the quiet amnesty of political prisoners and the absence of a new crackdown as a commitment to reform by President Alyaksandr Lukashenka, and softened international sanctions. Further bilateral dialogue between Washington and Minsk resulted in a commitment to restore diplomatic relations.

While Julie Fisher still awaits her confirmation as the first US Ambassador to Belarus in over a decade, her eventual arrival is likely to coincide with the aftermath of the presidential election there. Ahead of the August 9 poll, however, all pretense of reform has been abandoned. Lukashenka has dusted off his repressive toolkit and assailed his critics—arresting presidential hopefuls Viktar Babaryka and Siarhei Tsikhanouski, detaining and fining hundreds of peaceful protestors, and harassing scores of journalists. In the end, none of the strongest three candidates challenging Lukashenka for the presidential seat were allowed on the ballot.

To show they really mean business the Belarusian authorities are going much further this time, including by threatening women activists with rape and with deprivation of their parental rights, shuttering businesses that support protesters, and having media and art personalities sacked for speaking out. After the unprecedented, citizen-led fundraising campaign #ByCovid19 mobilized thousands across Belarus in support of medical workers, authorities shut down the crowdfunding platform MolaMola that powered the initiative. Its most active members have received numerous threats, and fear for their safety. It was convenient for the authorities that Babaryka had previously led Belgazprombank—the transaction provider for MolaMola—giving the government an opportune reason to swiftly capture the bank.

Separately, an intimidation campaign against popular bloggers, many of whom had openly supported Babaryka or Tsikhanouski, has landed seven of them in jail and prompted several others to flee the country.

We’ve lost count of cycles of repression in Lukashenka’s 26 years in power, but with over 900 arrests and detentions since May, this year’s crackdown is by far the worst.

Democracy in Belarus matters for its own sake

In trying to understand why a democratic outcome in Belarus is so important, it is easy to fall into an old trap of geopolitical arguments. Lukashenka’s government has deliberately manipulated the United States and EU with a paradoxical dichotomy that their hardline stance on human rights leaves Belarus no choice but to align with Russia. The official rhetoric also seeks to play down the scale of public dissent by shifting the focus from the enormous increase in civic activity to pure politics, juxtaposing Lukashenka against “the opposition.” Adopting these simplistic, dichotomous views risks overlooking the millions of Belarusian people who are signaling a demand for change.

The Belarusian president and his security apparatus have clearly underestimated the tremendous energy of civil society and a whole new generation of citizens who have come of age during his tenure. Preelection protests are only the tip of the iceberg. Independent polls show that more than half of the population is ready to vote for change, while only about a third favor a candidate running on stability. This goes far beyond official punditry’s dismissive estimates of what they call the “opposition ghetto” and instead represents more citizen diversity ranging from urban hipsters, to tech professionals, environmental activists, and even some government technocrats.

As the election looms, the government’s failure to contain the COVID-19 pandemic is jeopardizing the independent election observation mission of the Organization for Security and Co-operation in Europe (OSCE). Yet, the presence of external election monitors is not an end in and of itself; no matter how blunt the mission’s report, Lukashenka will simply ignore it. By focusing solely on what happens on election day, we risk of repeating the same mistake as always. It is already clear that the election will be neither free nor fair, and there is no reason to hope, yet again, that Lukashenka will miraculously change.

People are the driving force of change

The most critical question presently is how we can show solidarity with Belarusian people demanding change and help sustain this extraordinary wave of civic energy. The best way is for international stakeholders to stick to their principles and insist that democracy and human-rights values be respected no matter who the candidates on the presidential ballot are.

As the Belarusian security forces continue cracking down on peaceful protests and arresting and abusing activists and journalists, this principled message should be reinforced by renewed, targeted sanctions against Belarusian officials perpetrating human rights violations. In the United States, both the Belarus Democracy and Human Rights Act and the Global Magnitsky Act exist for this purpose. Turning a blind eye to the months-long persecution of dissent is further enabling the autocratic regime to act unchecked. An added value of smart sanctions is sending a strong signal that the same principles apply for Russian authorities.

Most importantly, however, is not to lose sight of the Belarusian civil society that had become buried in the ashes of geopolitical battles, or debates on electoral reform. Investing in Belarusian people should be the main priority no matter what the election’s outcome is. The civil society of Belarus is rising in all its previously unseen might, perhaps not always speaking with one voice, but nevertheless seeking one outcome: change.

The reaction of the Belarusian government is predictable, but there should be no questions surrounding the response of democratic states and stakeholders either. We should take our cue from Belarusian citizens, who have bravely chosen to defend what’s right and stand up in solidarity with each other and a free Belarus.

“A Constant State of Fear”: An Afghan Human Rights Defender Describes Her Life Under Taliban Rule