Braving the Risks of LGBTI Activism

Standing up for the human rights of LGBTI people entails great danger in many parts of the world, but successes to date show that it is a risk worth taking. 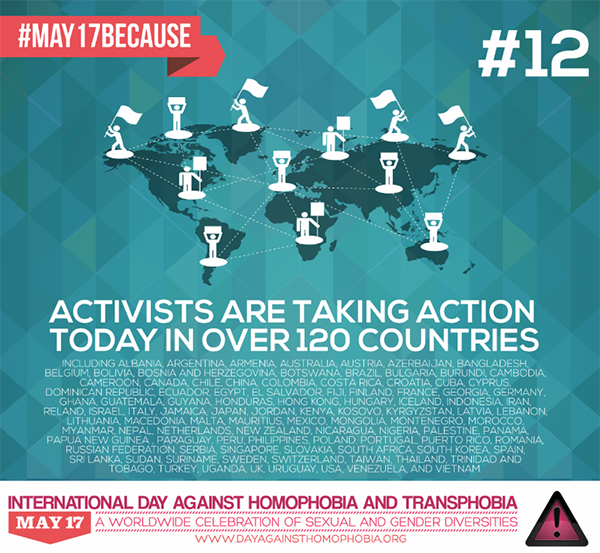 Standing up for the human rights of LGBTI people entails great danger in many parts of the world, but successes to date show that it is a risk worth taking.

Today is the International Day against Homophobia and Transphobia (IDAHOT), dedicated to solidarity with LGBTI communities everywhere. The exposure that accompanies IDAHOT—and the public LGBTI pride events kicking off in the coming weeks—carries a heightened risk for LGBTI people around the world, who could face arrest or attack while standing up for their basic human rights or celebrating their identities. Yet this exposure is also vital to the long-term struggle against discrimination.

The threats that LGBTI activists and communities face during IDAHOT events do not go away the next day. As the global trend of authoritarian crackdowns on civil society continues, LGBTI organizations are often hit the hardest. Even as private citizens, LGBTI people are especially vulnerable to human rights abuses. In Honduras, for instance, at least 37 LGBTI people were murdered in 2015.

The theme of IDAHOT this year is mental health and well-being. It is a topic long overdue for focused attention. In every region of the world, LGBTI human rights defenders and civil society organizations face threats because of their work, and the intimidation frequently comes from multiple angles: State hostility can enable community violence, and in many cases even activists’ family members are against them. Living and working in such environments inevitably takes a toll, pointing to the importance of greater discussion about ways to safeguard mental health and well-being. Individuals who persevere in hostile conditions are often resilient by nature, but informed self-care and strong community support networks can be critical to remaining healthy and productive.

To put the issue in perspective, it is worth remembering the degree to which threats against LGBTI human rights defenders are institutionalized at the state level in many places. Governments that enforce anti-LGBTI laws subject victims to arrest and prosecution, but in doing so they also foster hate and incite violence among local populations. Some heads of state have personally engaged in homophobic rhetoric, as the president of Nigeria did on a visit to Washington last year. In Russia, a law banning LGBTI “propaganda” amounts to a green light for local thugs to persecute LGBTI communities, and this pattern is being repeated across the region. In parts of Africa, where sodomy laws often persist as remnants of European colonial-era penal codes, police are encouraged to make mass arrests, and both private LGBTI citizens and well-known activists face attacks by non-state actors.

Impunity for crimes against LGBTI people in countries that have laws against consensual same-sex conduct is pervasive. However, impunity is also a problem in countries that may not have such explicitly anti-LGBTI laws, but suffer from extensive corruption or lack the rule of law. In certain parts of the Middle East and North Africa, mass arrests under vaguely worded morality laws, frequently accompanied by torture, have been a leading trend in the persecution of LGBTI communities. Azerbaijan, where same-sex sexual activity is not outlawed, is nevertheless ranked as the worst place to live in Europe according to the ILGA-Europe Rainbow Index, based on bias-motivated violence and a range of other laws, policies, and practices that affect LGBTI communities.

Despite the difficult and in some cases deteriorating conditions in many places, there is undoubtedly cause for hope. LGBTI human rights defenders and civil society organizations in countries such as Latvia, Mexico, and Ecuador have succeeded in getting anti-discrimination laws passed.  In South Asia and South America, activists have made strides toward improving voting rights for transgender people. All of these activists are strong and resilient, and they will not be deterred. It is our responsibility to support their efforts, based on the needs that they determine. At the very least, we must not tolerate or enable state-led human rights abuses against the LGBTI community or any other people.