Despite an exemplary constitution, societal violence against women and foreigners persists. 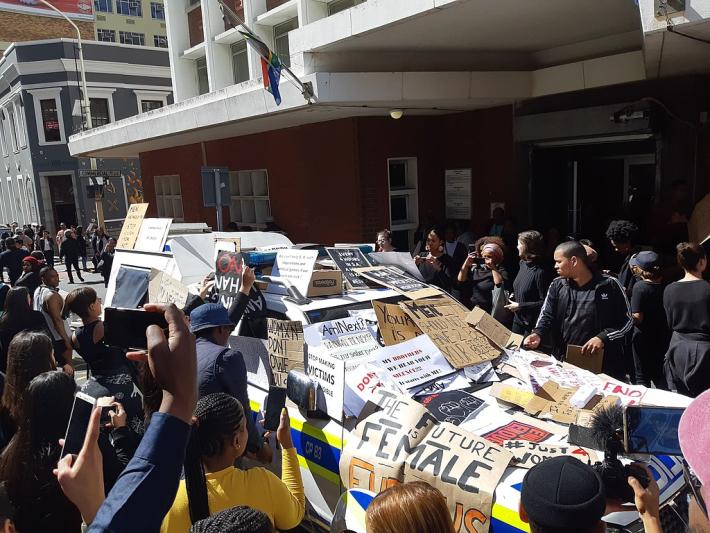 South Africa is presiding over the UN Security Council for the month of October. It has indicated that it will use its presidency to focus on Women, Peace, and Security.

With a South African leading UN Women, and the South African envoy to the United Nations stating his government’s commitment to “WPS” as a priority issue, this focus is unsurprising.

But President Cyril Ramaphosa did not attend the UN General Assembly last month, staying at home to deal with twin crises that have roiled the country and had international repercussions—attacks on women and girls on one hand, and collective violence against foreign residents in major urban centers on the other.

The latest examples of a chronic problem

The president has convened a special sitting of both houses of Parliament to “focus the attention of elected public representatives and the nation at large on the crisis of gender-based violence and femicide.” The session was called after a series of high-profile abductions and murders of women, culminating in the killing of a rising champion boxer by her partner and the murder of an activist student at a post office around the corner from a police station. Protests were held outside the Africa World Economic Forum sessions, and after these were forcibly dispersed, activists organized a massive march to Parliament. President Ramaphosa addressed the marchers despite being heckled.

While this was happening, outbreaks of collective violence against foreigners in Pretoria, Johannesburg, and other cities led to the destruction of foreign-run shops and claimed 12 lives. Significant numbers of foreigners were displaced and dispossessed. South Africa faced an unprecedented level of diplomatic fury from other African governments, followed by a highly visible official repatriation of a few hundred Nigerians and protests in Zambia and Nigeria against South African diplomatic and commercial institutions.

Neither the violence against foreigners nor the attacks on women are new. Nor were these incidents out of the ordinary. Annual police statistics released, coincidentally, during this period of heightened awareness show that there had been a 4.6 percent rise in reported sexual offenses over the previous year, among other increases, while the overall murder rate stands at 58 people a day. Meanwhile, both the ISS Africa Crime Hub and Xenowatch continue to track and verify attacks on residents as a result of xenophobia. Their statistics demonstrate that such violence is both widespread and continuous, with the sort of overt and substantial outbreaks that began in August 2019 representing merely the most visible tip of a larger iceberg.

How can the behavior of the country’s citizens be so out of sync with its constitutional values and international aspirations?

In 2017, longtime analyst and activist Lisa Vetten pointed to the relationship between violence and victimization, and called for new ways to deal with the gender-based violence problem other than a culture of policing and protectionism. By 2019, having secured neither protection nor policing, women began calling for the return of the death penalty. This call was very quickly rejected by the justice minister based on the signature constitutional case State v. Makwanyane and Another.

The case is only one of many in which courts and civil society groups have defended and confirmed the values enshrined in a constitution that is internationally recognized for its modern and relatively far-reaching commitment to human rights. These rights are intended to apply both vertically (between people and the state) and horizontally (among individuals and between people and the various legal entities they establish). What is more, the drafters of the constitution carefully used language to distinguish between those rights limited to citizens (in four out of 27 clauses) and those which apply to everyone, regardless of nationality or legal status.

Despite this, violence continues to break out in homes and on the streets, and that violence is accompanied by widespread victim blaming—either directly or indirectly. In the case of gender-based violence, women are asked to change their behavior in public and private; in the case of violence against foreigners, victims are accused of criminality or antisocial behavior (not paying taxes, not assimilating or learning local languages, freeloading on public services, undermining labor law protections, selling contraband or unsafe goods, and taking jobs meant for South Africans) and generally “making a nuisance” of themselves. Evidence that these accusations are inaccurate and exhortations for citizens to behave better have not made a significant difference, either to the levels of violence or to the prejudice against victims.

Freedom House has been working on the issues of collective violence and constitutional literacy in South Africa for about four years now, in collaboration with local peacebuilding groups, community organizations, and research partners. We have learned that South Africans do not feel they know their constitution well. Based on a combination of site-specific case studies and face-to-face interviews with 4,000 South African residents of poor periurban communities, we believe that addressing the wrong done by some South Africans toward the “other,” however conceived, requires an understanding of the factors that drive uncivil behavior.

Multifactoral analysis undertaken by Professor Mark Orkin, former statistician general of South Africa, and Tara Polzer-Ngwato of Social Surveys Africa demonstrates that those who, though poor, have benefited from the democracy dividend through better education, dignified and regular work, decent public services, and access to various forms of media have a much better chance of welcoming others and being lawful. A second group of people who are living in settled communities in their own houses, in extended and stable family units, are also more likely to be lawful. These people should be provided with improved contact with outsiders, programs that increase their civic agency and community efficacy, and support programs that reduce personal depression. Government and civil society organizations can identify a broad range of interventions that will make a difference in reducing both collective and individual violence.

The alternative of leaving people to their own devices, forcing them to construct perverse forms of self-government and privatize personal and community protection, decreases social solidarity and increases the likelihood that beaters, looters, and chasers will flourish and be valorized in marginalized communities. “What we see is protection rackets replacing formal government—gangster politics. Whether they whip up xenophobic protests or … other violent protests, this is done by local politicians to bring attention and to boost their own political careers,” explained Professor Loren Landau in a recent BBC News interview.

The South African constitution has high-minded aspirations, and the Ramaphosa presidency is in tune with these aspirations. Recent official actions including sending emissaries to other African countries to apologize for the attacks on their nationals, convening a special sitting of Parliament to debate responses to gender-based violence, committing $66 million to urgent responses, and continuing to promote peace and security within the African Union and United Nations systems all demonstrate this commitment.

But the abuse of basic rights by the country’s citizens and public officials thrives on poor governance, neglect, and the intentional and unintentional disempowerment of its people. Emergency responses to stop outbreaks of violence and to repair the damage done are necessary, but only progressive and more rapid realization of socioeconomic rights, coupled with people’s improved willingness and ability to make use of their civil and political rights as they are enshrined in the constitution, will finally end the violence itself.

Unsteady as She Goes: South Africa under Cyril Ramaphosa