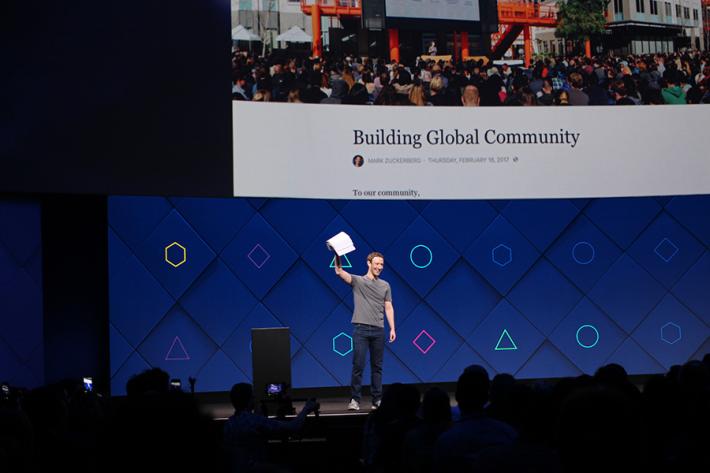 Five decades before Mark Zuckerberg vowed to “bring the world closer together,” a group of supranational entrepreneurs set out the goal of forming an “ever closer union of the peoples of Europe.” Both Facebook and the European Union have created new opportunities for trading ideas and goods within an imagined community that transcends national borders. But repeated crises have laid bare their disconnection from the ordinary people they are supposed to serve.

Facebook and the EU have each placed enormous confidence in top-down technocratic governance. Their legitimacy, in practice, is based not on the permanent allegiance or the direct and meaningful consent of the governed, but rather on their ability to attract members by delivering a rewarding “user experience.” Thus when people grow dissatisfied, their instinct is to leave rather than push for new leadership or mobilize for reform, as indicated by Brexit and the #DeleteFacebook movement.

Brussels and Silicon Valley share a common lineage in globalization. Facebook would not exist today were it not for a courageous decision to build a transnational telecommunications network run by a cluster of commissions and taskforces rather than any one government. Similarly, the EU began as a technocratic entity overseeing the coal and steel production of six nation-states, later expanding to encompass all types of cross-border commerce. Historians will laud the internet and European integration for contributing to an unprecedented expansion of trade and liberal democratic norms. In a very short time, billions of people gained access to new forms of free expression, education, travel, and employment.

But like other institutions associated with globalization, the EU and the tech industry are facing a backlash, accused of blindly pursuing their visions of progress while neglecting major flaws and collateral damage. In a leaked memo, Facebook vice president Andrew Bosworth wrote that even if “someone dies in a terrorist attack coordinated on our tools… we believe in connecting people so deeply that anything that allows us to connect more people more often is *de facto* good.” Both systems were built on idealism and contained few corrective mechanisms to address abuses by either internal or external forces. Thus the likes of Facebook, Google, and Twitter failed to protect their users from political manipulation and shady data brokers, and Eurocrats bungled their response to debt and migration crises.

Much of the debate about how to change Facebook has revolved around increasing the transparency and accountability of its decision-making processes. Unlike traditional companies, which sold customers a product for their private use, search and social media companies retain control over how we use their platforms—and even whether we are allowed to use them. To restore public confidence, all large online services must be more open with users about crucial decisions, particularly surrounding data privacy and free speech.

In its latest Corporate Accountability Index released this week, the nonprofit Ranking Digital Rights stated that Facebook’s “disclosure of options users have to control what information the company collects, retains, and uses was worse than any other company in the index.” Users also deserve more information about decisions to remove content that violates either Facebook’s internal rules or the laws of countries in which it operates. Too often these policies have been enforced unevenly, allowing violent incitement to remain while censoring human rights activists.

In his recent testimony before Congress, Zuckerberg said, “It’s not enough to just connect people, we have to make sure those connections are positive. It’s not enough to just give people a voice, we have to make sure people aren’t using it to hurt people or spread misinformation.” To its credit, the company has made recent moves to reformat its privacy tools and publish its internal guidelines for content regulation, while adding a process for appealing the removal of content for “nudity, sexual activity, hate speech, or violence” and obtain a second judgment within 24 hours. But to make the jump from enlightened dictatorship to democracy, Zuckerberg must open Facebook up to greater participation.

That should start with treating its users less like subjects and more like citizens. Facebook currently updates its terms of service with the same aloofness attributed to EU diplomats adopting treaty changes. As others have pointed out, Facebook experimented with “mass referendums” from 2009 to 2012. In its last vote—which altered how Facebook shares users’ personal data with partner companies—88 percent of participants (some 660,000 people) rejected the new terms of service. But turnout did not reach a 30 percent threshold to make the referendum binding, as only 0.2 percent of users participated. So the company went ahead with the changes, just as the EU has sometimes forged ahead with planned restructuring despite defeats in national plebiscites.

Greater democratization also means attending to the needs of vulnerable groups and local constituencies. For years civil society activists have complained about how hate groups were prospering on Facebook. UN officials investigating possible genocide in Myanmar implicated Facebook as having “substantively contributed to the level of acrimony and dissension and conflict.” In Sri Lanka, where extremists posted videos inciting ethnic violence, Facebook responded with a high-level delegation that worked out an agreement to address the problem, but only after the government blocked access to the platform. Zuckerberg has promised to hire more content reviewers who speak languages like Burmese and Sinhala, and work together with civil society groups “to identify specific hate figures so we can take down their accounts, rather than specific pieces of content.”

One of the greatest impediments to change is the notion that the actions and algorithims of big social media and search platforms are neutral by nature, technical rather than political, and undeserving of the level of scrutiny we apply to governments. Similarly, for decades many argued that the EU had no “democratic deficit” because it was a sui generis institution, essentially a cross-border trade regulator, not beholden to our common conceptions of popular participation and open deliberation. Certain scholars were quick to criticize these claims: Simon Hix long argued that the EU needed an injection of normal left-right politics in order to achieve accountability and legitimacy, and in 2012, digital rights activist Rebecca MacKinnon described how Facebook had become “a world unto itself: an alternative virtual reality that for many users is now inextricably intertwined with their physical reality.”

Thankfully, EU leaders and tech executives seem to be awaking to their obligations, with the president of the European Commission declaring, “Now is the time to build a more united, stronger and more democratic Europe,” and Zuckerberg now agreeing that Facebook is responsible for the content appearing on its platform.

Facebook and the EU can both be credited with giving hundreds of millions of people greater access to certain public goods. Facebook, for all its faults and despite what are ultimately pecuniary motivations, provides an open public square for the exercise of free expression and association. The EU is, at heart, a project to deliver peace and prosperity to a continent that had been subjected for centuries to the horrors of war. Users are free to leave Facebook, and whole nations have the option of leaving the EU; freedom and democracy would not necessarily die without them. But it would be far better to defend past gains, push for reform, and harness the potential of these institutions to spread the benefits of democracy even further.