After a violent election, Paul Biya has extended his 36-year rule at the expense of the country’s stability. 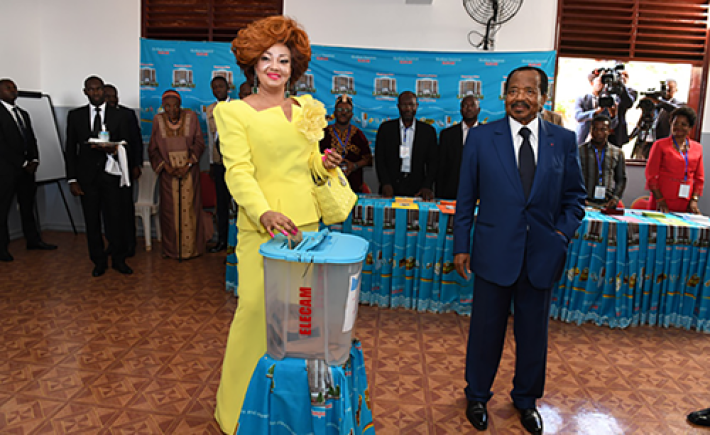 From left to right: Chantal Biya and President Paul Biya of Cameroon casting their votes

After a violent election, Paul Biya has extended his 36-year rule at the expense of the country’s stability.

Cameroon was once considered one of the more stable and economically viable countries in Africa. Despite the authoritarian rule of President Paul Biya, the economy continued to grow, and living standards continued to rise. State institutions were extraordinarily weak and the government did not tolerate any dissent, but foreign powers such as the United States and France saw Cameroon as a reliable partner in the region.

In 2008, the true character of the Cameroonian government became clear when Biya—already in power since 1982—secured a constitutional amendment to eliminate term limits that had been imposed in 1996. In doing so, he paved the way for himself to remain president for life, clinging to power by running the republic as a patronage network and using violence to suppress public discontent. Such an approach could only hold the country together for so long.

Cameroon now faces numerous challenges: It is fighting against the terrorist group Boko Haram in the north, dealing with high unemployment and a disaffected youth population, and cracking down on a growing insurgency by secessionists in the country’s two Anglophone regions. The regime’s defenders may argue that these challenges justify its heavy-handed and undemocratic tactics. But on closer examination, it is evident that the current crises are a direct result of authoritarian governance.

Take, for instance, the secessionist conflict. The dispute began as a peaceful effort by a linguistic minority to secure greater regional autonomy. The government refused to negotiate with demonstrators, used lethal force to disperse protests, and detained thousands of people, including leading Anglophone activists. Over time, some leaders of the demonstrations came to the conclusion that their legitimate grievances would not be addressed by the government, and they started a movement for independence that has now become an armed insurgency.

The political situation continued to deteriorate in the lead-up to the country’s presidential election earlier this month. The government itself tacitly acknowledged the crisis by postponing legislative elections, originally scheduled to occur in tandem with the presidential poll, by a year. The leadership probably would have liked to delay the presidential vote as well, but that would have further weakened Biya’s legitimacy.

As the election drew near, secessionists announced that they would prevent it from proceeding in the two Anglophone regions, and many individuals in Anglophone areas were reportedly beaten for carrying voter registration cards. At the same time, the government ramped up its own human right abuses and began killing civilians more frequently.

Even as growing numbers of civilians fled the violence in the Anglophone regions, electoral preparations went ahead normally in other parts of the country. The national media barely covered the opposition candidates, and pictures and banners of the incumbent president were displayed in cities and towns.

A total of nine candidates, including Biya, were approved to run in the election. In the past, opposition candidates in Cameroon had failed to form a coalition to challenge the entrenched incumbent. This time, two of the main challengers, Maurice Kamto and Akre Muna, agreed to join forces, though their chances remained slim. The government had deployed extensive state resources to support Biya’s campaign, and turnout in the Anglophone regions, an opposition stronghold, was likely to be miniscule.

The election took place as scheduled on October 7. Voter turnout was low nationwide, and normally bustling streets were virtually empty. In the two Anglophone regions, gunfire could be heard all day; only a few government officials voted under heavy security. Nevertheless, the opposition maintained hope that the coalition could pull off a surprise victory.

The day after the voting, Kamto gave a speech in which he declared victory and urged Biya to facilitate a transition, despite that fact that official results were not scheduled to be announced for weeks. The government claimed that Kamto’s declaration was illegal and began to deploy troops to neighborhoods where support for him was strong.

Over the subsequent days, disinformation spread among the general population. Messages circulated on WhatsApp stated that Kamto had been declared the winner and that Biya had accepted the results. The secessionists even congratulated Kamto on his victory via social media and called on him to remove troops from their self-declared country of “Ambazonia.”

The postelectoral period also became violent, with government forces invading the opposition coalition’s headquarters. Activists and journalists who supported the opposition or raised concerns about the vote have been jailed.

Multiple opposition candidates filed petitions at the constitutional court, arguing that fraud and irregularities had undermined the legitimacy of the election. However, the court dismissed all of the claims. On October 22, electoral authorities announced that Biya had won reelection with over 71 percent of the vote. The military remained deployed in large numbers across the country to respond to any demonstrations against the official results.

This election has only reinforced the fact that the regime of Paul Biya, now 85 years old, is dedicated to maintaining its grip on power through brute force and repression. Yet another generation of Cameroonians seems likely to be brought up knowing just one president and one undemocratic form of governance.

But it is also increasingly clear that this government is incapable of addressing the mounting crises that surround it, and that its violent tactics are yielding diminishing returns with respect to political stability. Those in Cameroon and abroad who have an interest in the country’s basic integrity should press the regime to change course before it is too late.