After Brexit and Trump, does Emmanuel Macron’s success herald a tidal shift toward liberalism? 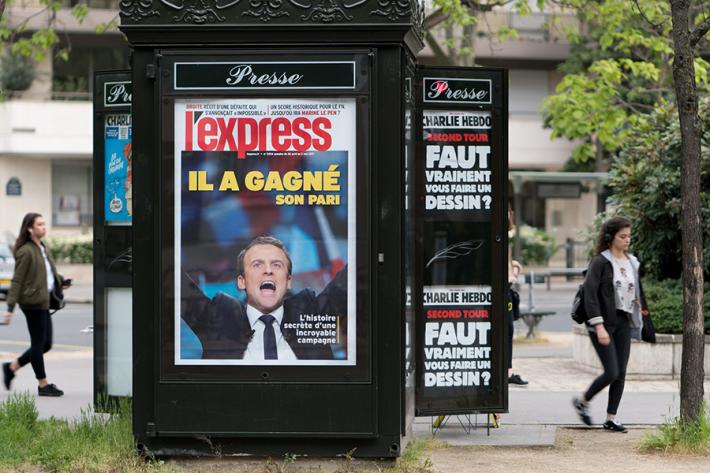 Today French liberals can breathe a sigh of relief, having chosen moderation over nihilism, as embodied by the empty rancor of nationalist populism. But after Brexit and Trump, does Emmanuel Macron’s success herald a tidal shift toward liberalism?

“It is not the nobility of rebellion that illuminates the world today, but nihilism.” So wrote Albert Camus in his 1951 treatise The Rebel, in which he called for a politics “on the level of moderation to which [humankind] belongs. Every undertaking that is more ambitious than this proves to be contradictory.”

Today French liberals can breathe a sigh of relief, having chosen moderation over nihilism, as embodied by the empty rancor of nationalist populism. But after Brexit and Trump, does Emmanuel Macron’s success herald a tidal shift toward liberalism? If it fails to address the root causes of popular dissatisfaction, Macron-style centrism may actually accelerate the decline of liberal democracy and fuel the rise of extremist forces.

Macron sought to channel the spirit of rebellion, stealing Le Pen’s thunder by founding his own political movement and framing himself as an outsider poised to shake up the establishment. Macron will be France’s youngest president and has never before been elected to public office. But for his opponents, he represents everything that they loathe about the establishment.

His youth and relative inexperience have been criticized as markers of unearned privilege. He riled nationalists by claiming there is no single French culture and calling France’s colonial past “a crime against humanity.” He has been mocked for overusing the phrase en même temps—“at the same time”—a telling tick for those who see him as unrealistically or disingenuously promising the best of both worlds.

On both the right and the left, he is also denounced as the consummate “Davos Man,” a former Rothschild banker and neoliberal attempting to pass as a revolutionary. After all, Macron first became widely known for the Loi Macron, an economic liberalization package that was enacted during his short tenure as economy minister. Fearing that the bill would not obtain a majority in the National Assembly, Prime Minister Manuel Valls took the controversial step of utilizing Article 49.3 of the constitution, which allows the government to push laws through the parliament unless a majority of legislators pass a vote of no confidence, forcing the cabinet to resign. The procedure has a fraught history in French politics, and Valls himself vowed to repeal it if he won the Socialist Party’s presidential primary. (He lost.)

Reviving the democracy in liberal democracy

Whether or not he was entirely successful, Macron was on the right track in his attempt to transform himself into a passionate insurgent. Questionable top-down maneuvers by technocratic elites, like the passage of the Loi Macron, reduce the public’s faith in democratic institutions and allow illiberal populists to pose as champions of the national will.

For example, French voters rejected a proposed European Constitution in a 2005 referendum, only to see the government sidestep their decision by adopting similar provisions in the Treaty of Lisbon. More recently, a lack of accountability and transparency regarding EU decisions has fueled the perception that France, like its debt-laden Southern European counterparts, is powerless to change the union’s fiscal and monetary policies, despite citizens’ widespread frustration with austerity measures.

Macron shows early signs of understanding the need to restore public confidence in the system. To clean up the governing class, he has proposed barring French politicians from employing their own family members, instituting a two-term limit on holding the same office, banning anyone with a criminal record from running for office, and reducing the number of deputies and senators by one-third.

To address the accusation that monetary policy is beyond France’s control, he has advocated mechanisms for greater debt-sharing and joint fiscal governance among the eurozone economies, which would shift power away from Germany in particular. To bolster the rule of law in response to security concerns, he has called for 10,000 new police officers, a new EU border guard force, and an expansion of French prisons.

Finally, to invigorate the economy and reorient state spending, he has proposed to cut 120,000 public-sector jobs, make $55 billion in public investments, lower corporate taxes, and grant more autonomy to public schools and universities in order to prepare the next generation of French workers for the modern job market. On controversial labor reforms, Macron has stated he will ask the parliament for permission to adopt them by executive order, betting that many voters would welcome virtually any sign of energetic policymaking on the issue after decades of paralysis under both center-left and center-right administrations.

Macron’s strength is his ability to be unabashedly centrist. Unlike incumbent president François Hollande, Macron does not need to appeal to the more left-wing and protectionist factions of the Socialist Party, nor does he depend on support from hard-line nationalists to the right. With no preset expectations about his left-right allegiance, he cannot be accused of hypocrisy or betrayal when he reaches out to one side or the other for ideas or support.

Recent polls have his En Marche movement set to take the largest number of seats in the June parliamentary elections, but to pass legislation, Macron will have to rely on likeminded reformers in both mainstream parties. Much will depend on the center-right Republicans’ ability to choose the national interest over obstructionist politics. Just as liberals united to defeat far-right candidate Marine Le Pen in the presidential vote, a new “grand coalition” will be needed in the legislature to deliver France from its malaise. This is centrism’s promise, as well as its peril: By uniting under one banner, the center-left and center-right effectively force any dissatisfied voters to move to the extremes.

For liberal democracy to thrive, citizens must be given a range of options along the political spectrum. In many countries over the past three decades, mainstream parties have ossified and gravitated toward the center—reaching consensus on certain policies while fighting to a stalemate on others—to such an extent that frustrated citizens have come to view groups like France’s National Front, Italy’s Five Star Movement, or Greece’s Syriza as the only vehicles for real change.

Macron must prove to a skeptical public that “moderation is not the opposite of rebellion,” as Camus stated, convincing trade unions, struggling workers, and unemployed youth that the best way out of an untenable status quo is to shake up France’s economy and overhaul rather than reject the EU. If this project fails, more voters will undoubtedly turn to the type of illiberal government already seen in Hungary and Poland, which promises revolution but delivers repression.