Chechnya's Dictator Exploited a World Cup Star. What Else Is New?

FIFA must prevent a repeat of Mohamed Salah’s humiliating treatment in Russia. 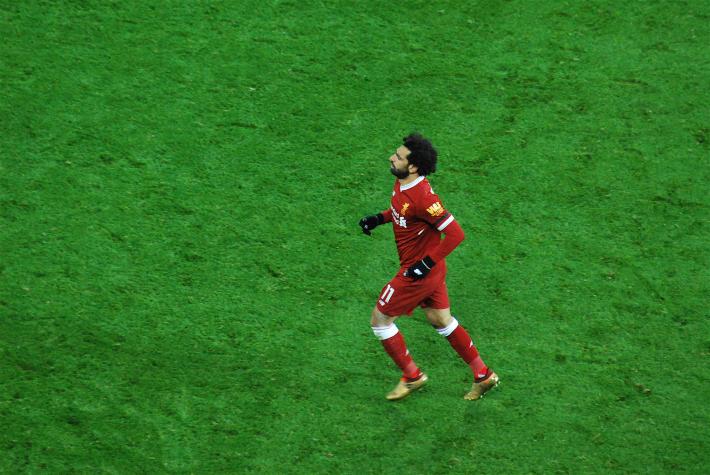 FIFA must prevent a repeat of Mohamed Salah’s humiliating treatment in Russia.

At a time when right-wing nationalist and xenophobic movements are making gains across Western Europe and the United States, the words now being sung by fans of one of England’s most storied soccer clubs might come as a bit of a shock:

Mo, the Egyptian King, Egyptian Messi, the Pharaoh—all these nicknames refer to Mohamed Salah, a 26-year-old Egyptian soccer player whose sensational performance with Liverpool FC took the English Premier League and the rest of the soccer-loving world by storm in the 2017–18 season. He set the record for most goals scored in an English Premier League season, led Liverpool to the final of Europe’s most prestigious club competition, the Champions League, and helped Egypt qualify for the World Cup for the first time since 1990.

Salah has transcended rampant Islamophobia, becoming arguably the most popular Muslim individual in the world. The World Cup this summer seemed destined to cement his place among the game’s greatest players.

As it turns out, Salah largely disappointed at the World Cup, missing the first match due to an injury and recording only a single goal in the tournament. The Egyptian team went winless in three matches and was sent packing after failing to qualify for the knockout rounds. The Egyptian Football Association (EFA) has been blamed by many for the poor team selection. However, its off-field actions drew significantly harsher criticism.

The EFA essentially agreed to allow Chechen dictator Ramzan Kadyrov, who hosted the Egyptian team’s World Cup training camp throughout their short stay in Russia, to exploit Salah for propaganda purposes, advancing his goal of developing strategic relationships across the Muslim world. Indeed, the EFA’s decision to establish its training camp in Chechnya was clearly a political one—the site was easily the most remote location of all the World Cup training camps, and it made little logistical sense.

Shortly after Salah arrived in Grozny, Chechnya’s capital, Kadyrov paid him a visit at his hotel. The Egyptian superstar and the Chechen warlord posed for photos in the lobby in front of several hundred fans. Kadyrov then held a banquet for the Egyptian team, during which he granted Salah honorary Chechen citizenship. Videos and pictures of a smiling Salah accepting a silver plate, a pin with the Chechen flag, and a signed jersey from Kadyrov were released by Russia’s state-funded news agency, RT.

The taint of association with Kadyrov cannot be overstated. He made international headlines in the spring of 2017 when Elena Milashina, a Russian investigative reporter and the most recent recipient of Freedom House’s Freedom Award, broke the news that Kadyrov’s regime was carrying out a campaign of systematic persecution and torture against gay men in Chechnya. But this was only the latest addition to the Chechen government’s long record of extralegal violence, political repression, and discrimination against women and minorities.

Kadyrov is no stranger to ‘sports-washing’

Like so many strongmen before him, Ramzan Kadyrov has a history of utilizing sports to promote his image and draw attention away from his human rights record. Boxing champions Floyd Mayweather and Mike Tyson, mixed martial arts (MMA) champions Fabricio Werdum, Frank Mir, and Frankie Edgar, and even the Brazilian national soccer team have visited Chechnya to participate in widely publicized events with Kadyrov.

In 2014, the warlord used Akhmat-Arena, a soccer stadium that seats over 30,000 fans, as the backdrop for a speech in which he declared his willingness to unleash his private militia at Russian president Vladimir Putin’s request. And it is no coincidence that FC Akhmat Grozny, the stadium’s home team, is chaired by Magomed Daudov, a former guerrilla commander who played a key role in Kadyrov’s purge of gay men in the republic. Daudov’s promotion to colonel in the security forces in 2004 came with a simultaneous promotion to a leadership role in Chechnya’s main soccer team.

FC Akhmat Grozny—known as Terek FC until 2017, when it was renamed after Kadyrov’s father—is an important symbol for the republic’s leadership, which is probably why claims of blackmail, sabotage, and match-fixing follow the club wherever it goes. In 2016, during a match between FC Akhmat Grozny and FC Rubin Kazan, a team from the Russian republic of Tatarstan, Daudov was alleged to have entered the referees’ changing room at halftime to pressure them into ensuring that the match went Grozny’s way. The second half saw two FC Rubin Kazan players expelled with red cards as Grozny cruised to a 3–1 victory.

Soccer, however, is not the only sport Kadyrov has made use of in his attempts to glorify his role in Chechnya and the world. As indicated by some of the foreign champions invited to the republic, an association with MMA has become a prominent part of Kadyrov’s hypermasculine image. The Akhmat MMA fight club, also named after Kadyrov’s father, is controlled by Abuzayed Vismuradov, yet another military commander and close friend of Chechnya’s dictator. The Colosseum Sports Complex regularly plays host to some 4,000 men (women are rarely, if ever, seen at these events) chanting “Akhmat Power” as competitors beat each other to a pulp with their bare hands. In 2016, Kadyrov hosted three MMA fights at the arena that featured his own sons, whose ages ranged from 8 to 11.

A history of political co-optation at the World Cup

Soccer is the world’s most popular sport, and the World Cup is the world’s most popular sporting event. The final game of the 2014 tournament reached a television audience of 1.013 billion people, compared with 103.4 million viewers for American football’s 2018 Super Bowl. The seductive power of the world’s favorite game is not lost on authoritarian regimes. The World Cup was used to smother domestic dissent and attract positive publicity many times before Putin’s Russia and Kadyrov’s Chechnya were granted the opportunity to play host.

The 1978 World Cup was held in Argentina during the reign of a military junta led by Jorge Rafael Videla. The final of that tournament saw Argentina overcome the Netherlands at the Estadio Monumental in Buenos Aires, an event that sparked jubilation across the country; just a stone’s throw away from the stadium, however, political prisoners were celebrating a short reprieve from the daily torture they faced in one of the junta’s most infamous detention facilities. The thousands of people who had been forcibly disappeared by the government were, for a time, truly forgotten while Argentina celebrated its first-ever title.

Just eight years earlier, the Brazilian national team dazzled the world on their way to a World Cup title in Mexico. Pelé, Brazil’s greatest-ever player, won his third and final World Cup championship, and Brazil’s military government was not shy about basking in the glow: Pelé’s image was put on postage stamps; he was sent to newly independent African republics on “goodwill tours”; and in 1972, during the height of government repression, Pelé was quoted as saying, “There is no dictatorship in Brazil. Brazil is a liberal country, a land of happiness. We are a free people. Our leaders know what is best for [us], and govern [us] in a spirit of toleration and patriotism.”

Decades before Pelé took the field in Mexico, Fascist Italy hosted the second World Cup in 1934. Benito Mussolini, who had come to power in 1922, saw this as his chance to show the world how successful a Fascist country could be. Following a tournament brimming with controversial calls, suspicious results, and suffocating propaganda, Italy emerged as champions of the world as Mussolini watched from the stands.

FIFA has the power, and thus the responsibility, to make a difference

Time and again, soccer’s world governing body, FIFA, has failed to stand up for human rights. The fact that Russia was allowed to host the 2018 World Cup in the first place—and that Qatar will be the host in 2022—speaks to the organization’s complete disregard for basic democratic standards.

But past indiscretions should not prevent FIFA from changing course. Its new human rights policy, launched in 2016, provides a framework to address blatant abuses such as the deadly working conditions on World Cup construction sites in Qatar. This policy should be taken up as a real tool in the fight for human rights, as opposed to the public relations prop that it currently is.

FIFA can begin by penalizing Egypt and the EFA through a fine or a temporary international ban. By remaining silent while a known human rights abuser co-opts the image of one of the game’s brightest stars for his own political purposes, FIFA is essentially condoning Kadyrov’s actions. No sport holds more power than soccer, and FIFA has a responsibility to ensure that this power is used to promote rather than diminish human dignity and freedom.