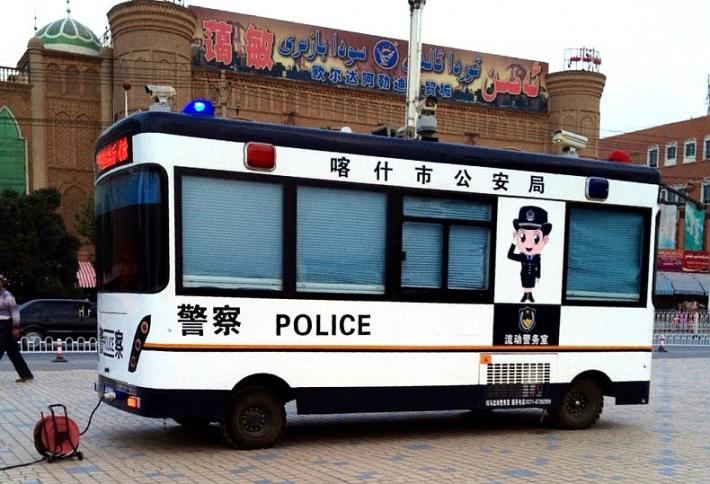 This article originally appeared in The Diplomat on April 25, 2018.

China’s authoritarian regime is taking systematic steps to expand its surveillance of people and communication channels within the country, and the tentacles of the apparatus are slowly extending far beyond China’s borders. A series of revelations and activist arrests over the past month provide insight on this project and what it means for the future of China and the world.

As other observers have noted, the western region of Xinjiang is ground zero for the Chinese government’s expanding surveillance program. A dense network of video cameras, checkpoints, and human informants keep close tabs on most residents, especially those of Uighur or Kazakh ethnicity. This system is constantly being upgraded with new technologies. Some hotels in Urumqi now have facial recognition software to verify the identity cards of visitors. When the region’s new subway opens in June, ID cards will apparently be needed to purchase tickets.

Last July, authorities in Xinjiang demanded that residents install a special application on their mobile phones—Jingwang (“Clean Net”)—that scans devices for certain files like photos and videos deemed “dangerous” or overly religious and reports back to authorities. A technical audit of the app published on April 9 by the Open Technology Fund confirmed its intrusive capabilities, finding that “any user with this app installed will have every file stored on their device sent to an unknown entity for monitoring.” The analysis also noted extremely insecure channels used for relaying the data to remote government servers, rendering it vulnerable to interception and manipulation by almost anyone.

While surveillance remains especially vigorous in Xinjiang, it is also expanding throughout China. This is particularly true regarding the use of facial recognition technologies, social media app monitoring, and the emerging contours of a social credit system. One artificial intelligence (AI) company, SenseTime, whose investors now include the Chinese tech giant Alibaba, has gained attention in recent weeks. Founded in Hong Kong, the firm specializes in facial recognition and has a variety of commercial clients who use its products for payment or app logins. But according to Quartz, its clientele also includes local governments and public security bureaus in places like Guangdong and Yunnan, and at least one prison in Inner Mongolia. The Washington Post reported that this type of technology was used on April 7 to catch a man suspected of “economic crimes” at a concert in Nanchang, Jiangxi Province, which had 60,000 people in attendance.

With regard to social media apps, it has long been clear that police have unfettered access to user communications and personal details on popular services like QQ or WeChat once an investigation is opened. A newly proposed police implementation plan for last year’s Cybersecurity Law may expand that access even outside the criminal context. Meanwhile, as tech firms in China come under increased pressure to cleanse their networks and communities of “harmful” information, recent weeks have featured a spate of new cases involving users punished or interrogated by police for communications that were ostensibly shared privately with friends.

On April 3, detained activist Huang Qi filed a legal complaint claiming that Tencent, the parent company of both QQ and WeChat, had given his data and private communications to police as they attempted to build a case against him for his work related to a human rights news website. ChinaChange reported the next day that members of several politically liberal “Rose Group” chats have been questioned and threatened by police since February, as authorities seek to pressure them to abandon their online discussions. Since April 11, at least eight people involved with a WeChat group that attempted to organize support for the families of prisoners of conscience have been detained. And in a sign of how thoroughly these applications have been penetrated by the surveillance apparatus, China Digital Times published a leaked directive dated April 10 from an internet policing department in Hangzhou, Zhejiang Province. It orders an investigation into an individual who criticized Chinese leader Xi Jinping in a WeChat group with only eight members. The instructions identify the person by his real name, address, and phone number, even though he used a pseudonym for the offending post.

Individuals caught in the surveillance dragnet in China can face arbitrary detention and harsh prison sentences, among other repercussions, but the phenomenon also has effects on the wider world.

First, foreign companies operating in China or working with Chinese firms increasingly risk accusations of complicity in politicized arrests or violations of user privacy. In February, the U.S.-based note-taking app company Evernote announced that Chinese users’ data would be transferred to Tencent Cloud by mid-2018 to comply with data localization rules in the Cybersecurity Law. Airbnb recently alerted its hosts that starting on March 30, “Airbnb China may disclose your information to Chinese government agencies without further notice to you.” And in addition to Alibaba, one of the biggest investors in the AI firm SenseTime is U.S. chipmaker Qualcomm.

Second, some of these tactics and technologies are being deployed remotely against members of the Chinese, Tibetan, and Uighur diasporas, extending the repressive reach of the Chinese Communist Party far beyond China’s borders.

Third, China’s surveillance innovations are apparently being shared with other undemocratic governments. On April 13, Reuters reported that Yitu, a Chinese AI firm and competitor of SenseTime, recently opened its first international office in Singapore, and is preparing a bid for a government surveillance project that will include facial recognition software deployed in public spaces. Last week, Nikkei reported that Yitu had supplied “wearable cameras with artificial intelligence–powered facial-recognition technology to a local law enforcement agency” in Malaysia. Both countries are rated only Partly Free in Freedom House’s global assessment of political rights and civil liberties, and their governments have a long track record of suppressing political opposition and peaceful protesters.

Rising concern at home and abroad

Despite their relative secrecy, the Chinese authorities’ growing surveillance capabilities have not gone unnoticed even within China, as people become more aware of and sensitive to privacy rights. In Wuhan, artist Deng Yufeng created an art installation with the personal information of 346,000 people that he had purchased online for a mere $800 to raise awareness about the insecurity of personal data. Authorities shut down the exhibit in early April after just two days and are reportedly investigating Deng for obtaining the data, but news of the project spread through text messages and media reports, including in The Legal Daily, a state-run publication. More broadly, a recent survey found that 76.3 percent of Chinese respondents see AI as a threat to their privacy.

Internationally, the risk of surveillance has hurt Chinese tech firms’ efforts to expand to new markets. Last month, Australia’s Defence Department instructed military personnel not to use WeChat on their mobile phones due to security concerns. In the United Kingdom, the Financial Times reported on April 16 that the director of the National Cyber Security Centre had sent a letter to British telecom companies warning them not to use products from Chinese supplier ZTE, as it would “present risk to UK national security.” More recently the United States has moved to clamp down on telecom hardware from both ZTE and Huawei, another major Chinese manufacturer.

Nevertheless, these companies will continue to grow in tandem with their most important customer, China’s surveillance state. Indeed, the regime’s voracious demand for AI policing capacity and the data it provides to train the companies’ algorithms will only render their products more effective and attractive to foreign autocrats.

In the meantime, Chinese citizens and foreigners alike would be well advised to enhance their understanding of digital security and the risks that come with exposure to Beijing’s unblinking and increasingly intrusive gaze.

Sarah Cook is a senior research analyst at Freedom House and director of its China Media Bulletin.