Citing “Fake News,” Singapore Could Be Next to Quash Free Expression

The government’s new bill adds to a regional pattern of online restrictions. 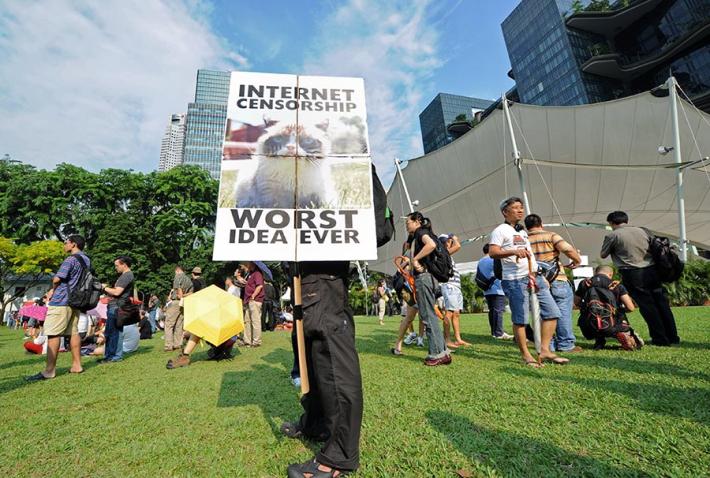 A protester stands with a placard during a rally at a free-speech park called Speakers' Corner in Singapore. Photo Credit: ROSLAN RAHMAN/AFP/Getty Images.

The government’s new bill adds to a regional pattern of online restrictions.

This article was first published on Just Security.

Singapore has moved from outlier to trendsetter in the troubling transnational uptick in government efforts to restrict free expression. Amid an increase in arrests and prosecutions for online activity and the Singapore government’s efforts to block websites for not complying with takedown orders, free expression has been taking a beating. But draft legislation released this week, the Protection from Online Falsehoods and Manipulation Bill, would impose even more restrictions on the city-state’s tightly controlled media environment. If adopted in its current form, the bill could also provide a model for other countries looking to use a genuine problem—“fake news”—as a pretext to suppress legitimate journalism and commentary.

The government in Singapore, which Freedom House ranks as only Partly Free in terms of both internet freedom and its overall level of democracy, has signaled its intent to legislate against “fake news” in recent years. The effort would increase state control over online media in a country where major print and broadcast outlets are owned by companies with links to the government, and self-censorship among them is common. In September 2018, Parliament’s Select Committee on Deliberate Online Falsehoods released a 300-page report, finding that the authorities needed the power to interrupt the “virality” of misinformation in “a matter of hours.”

The Protection from Online Falsehoods and Manipulation Bill aims to address “false statements” that affect the “public interest.” The draft text explains that “a statement is false if it is false or misleading, whether wholly or in part, and whether on its own or in the context in which it appears.” This extremely broad definition is a serious concern, as it essentially makes the government the arbiter of truth. Even a statement that is factually accurate could apparently be deemed “misleading in part” and thus “false” under the law. While Singapore’s Ministry of Law has claimed that the bill will not target “opinions,” “viewpoints,” or “criticisms,” it is hard to imagine that it would do otherwise in what is already such a restrictive environment. (Case in point: In March 2018, an arm of the ruling People’s Action Party (PAP) called a Human Rights Watch report a “deliberate falsehood.”) The bill also broadly defines “public interest” to include everything from protecting the country’s friendly relations with other states to preventing “a diminution of public confidence” in the government.

Once something is deemed false and contrary to the public interest, any government minister can force websites to publish corrections next to the content or can issue takedown and blocking requests. Giving this power to any minister, as opposed to a specific ministry or independent regulatory body responsible for digital technology, provides an unprecedented amount of power to a range of people. The bill goes on to state that the competent authority is then required to pass along the relevant orders to content owners or hosts. Censorship orders can be appealed to a minister and, if upheld, to the High Court, though the government’s consistent success in court cases, particularly those in which the authorities accuse critics of defamation, casts doubt on the independence of Singapore’s judiciary.

The draft law would also impose harsh penalties on users, content hosts, and internet service providers (ISPs). Individuals who do not publish corrections or comply with takedown requests can be subjected to 12 months in prison or fines of up to S$20,000 (US$14,800). ISPs that do not carry out blocking orders can also be fined up to S$20,000 a day, with an upper limit of S$500,000. Websites with three published falsehoods within six months can have advertising money restricted. The use of bots or an “inauthentic online account” to communicate false content mandates a prison term of up to 10 years and fines of up to S$100,000.

As it is written, the law may be extraterritorially applicable, although it is unclear how this would work in practice. It states that its provisions pertain to any “false” content that “is made available to one or more end-users in Singapore on or through the internet,” meaning the material could originate in any country and does not need to reach a mass audience in Singapore.

The latest in a regional trend

Singapore is not alone in its effort to regulate “false” content online. Between June 2017 and May 2018, at least 17 countries approved or proposed laws that would restrict online media in the name of fighting “fake news” and online manipulation. During the same period, at least 13 countries prosecuted internet users for spreading “false” information.

Countries in Asia have led the charge. The government in Malaysia, where the mainstream media were already dominated by the incumbent leadership at the time, became one of the first to implement a law specifically targeting “fake news.” In April 2018, then prime minister Najib Razak and his outgoing Barisan Nasional (BN) government rushed the Fake News Act through Parliament. The law prescribes prison terms of up to six years and fines of up to US$125,000. Like Singapore’s draft law, the Fake News Act could be applied to users or entities outside Malaysia, encompassing content that is about either Malaysia or a Malaysian citizen. The law was used for the first time shortly after it was adopted, when Danish national Salah Salem Saleh Sulaiman was fined US$2,500 after posting a video on YouTube that accused police of taking 50 minutes to respond to the shooting of a Palestinian lecturer in Kuala Lumpur, even though police said it took them just eight minutes to respond.

The government of current Malaysian prime minister Mahathir Mohamad, who ousted the long-ruling BN with a surprise victory in the May 2018 elections, initially promised to repeal the law, but its efforts have stalled. The lower house of Parliament backed a repeal last August, but the BN-controlled upper house voted to keep the act in place.

Meanwhile, authoritarian regimes across Southeast Asia are moving forward with new restrictions or vigorously enforcing old ones. Vietnam’s draconian cybersecurity law, which closely mimics China’s version, came into effect in January 2019. Among other provisions, the law prohibits spreading false information online and requires companies to remove content within 24 hours of being notified by authorities. Thailand utilizes Article 14 of its repressive Computer-Related Crime Act to target the introduction of “false or distorted information” into a computer system. Around the country’s March 2019 elections, at least five people were charged for sharing allegedly fraudulent content online, including two leaders of the opposition Future Forward Party. In Cambodia, the government has called for a new law that would explicitly target “fake news,” most recently in March 2019. A government directive issued in July 2018 required all websites to register with the Ministry of Information and prescribed jail sentences of up to two years for spreading fake news online.

In the Philippines, where the media remain comparatively vibrant but face enormous pressure from the government and extralegal violence, lawmakers in June 2017 proposed criminalizing the dissemination of false news with malicious intent. President Rodrigo Duterte has attacked the investigative media site Rappler as a “fake news outlet,” and there remain 11 charges pending against the outlet and its chief executive, Maria Ressa. Even more democratic countries like South Korea and India have indicated their intent to regulate false content online.

The right way to tackle disinformation

Deliberately falsified or misleading content is a genuine problem that calls for effective policy and legal responses. But even well-intentioned policymakers are at risk of harming internet freedom—and with it the free exchange of news and information that is vital to any democracy—by adopting flawed legislation. The push in some countries to increase companies’ legal liability for third-party content, for example, can incentivize social media platforms to err on the side of censorship rather than protecting legitimate expression.

International human rights law, particularly the International Covenant on Civil and Political Rights (ICCPR), offers guidance on how to craft effective remedies to disinformation without unduly restricting free expression. The ICCPR requires that any restriction be as narrow as possible, proportional, and necessary to achieve a precisely stated and legitimate goal. All government decisions must also be transparent, with meaningful appeals processes available for the users and services affected by improper removals.

More constructive solutions can be developed through collaboration among civil society groups, governments, and the private sector. One of the strongest tools against disinformation is long-term media and digital literacy efforts that engage users of all ages; healthy media habits will help users more effectively identify disinformation and limit its spread. Tech companies should also partner with local civil society groups to maintain robust fact-checking and security standards on their platforms. For all types of initiatives, governments should be engaged in continuous and genuine dialogue with local civil society organizations and the private sector.

Singapore’s Prime Minister Lee Hsien Loong supports the new “fake news” bill, effectively ensuring that it will pass through the PAP-dominated legislature. This does not bode well for users in the country, or for those in neighboring countries where the authorities are eager to regulate disinformation. To push back against excessively restrictive new laws, democratic governments, political parties, tech companies, journalists, activists, and ordinary users should lend their support to alternative approaches that address the underlying problem without violating freedom of expression or shielding those in power from criticis