Colombia’s FARC Faces a Complex Path from Insurgency to Politics

A skeptical new president is not the only obstacle the former rebels must overcome. 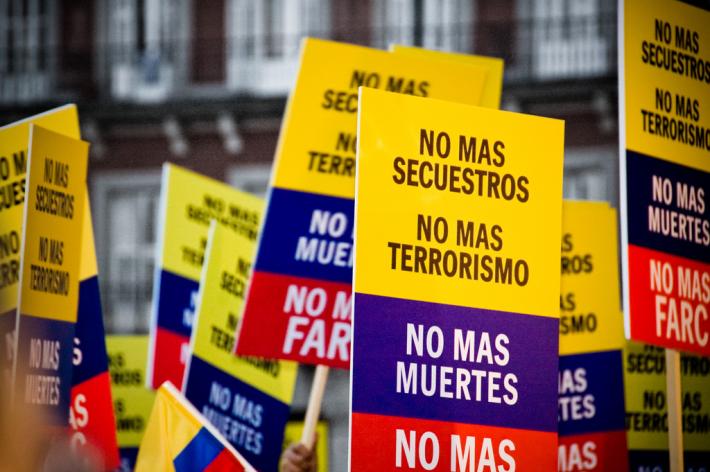 by Sergio A. Galeano, Researcher

A skeptical new president is not the only obstacle the former rebels must overcome.

On July 20, the Colombian legislature convened for its opening session following congressional elections in March. However, unlike in previous years, the 280 senators and representatives who assembled for the session included 10 former members of the FARC (Revolutionary Armed Forces of Colombia).

The left-wing guerrilla organization was formed in 1964 and went on to wage war against the Colombian state for the next 53 years, during which the fighting claimed over 220,000 lives and displaced more than 8 million people. A 2016 peace agreement formally put an end to hostilities, establishing a framework for the social and political reintegration of former rebels and the formation of a FARC political party—the Alternative Revolutionary Force for the Common People—that is guaranteed 10 seats in Congress for the next two terms. If the peace holds, it will mark the end of the longest armed conflict in the Western Hemisphere.

However, newly elected president Iván Duque, who will take office on August 7, ran as an ardent critic of the peace plan, arguing against its perceived leniency toward the former rebels and a lack of justice for their victims. He has proposed amending the constitution to make the peace agreement much stricter, an idea supported by his party leader and mentor, former president Álvaro Uribe. Their Democratic Center (CD) party holds just 51 seats in Congress, but in cooperation with two other conservative factions, the Liberal Party and Radical Change, it can advance major legislation.

The FARC will clearly have to weather a strong challenge to the settlement it reached with the previous administration. But it must do so while grappling with its own leadership problems amid the difficult transition from rebel group to political party.

The FARC’s 10 guaranteed seats represent only a tiny fraction of Congress, but many Colombians consider its presence to be an outrageous insult to the victims of the long civil conflict. As it seeks to navigate these political headwinds, the party has been deprived of some of its leading figures.

Colombian authorities arrested FARC peace negotiator Jesús Santrich on drug trafficking charges in April, a few months before he was due to take office. Iván Marquez, who also played a major role in the peace negotiations in Cuba, announced last week that he would not be taking up his Senate seat as a gesture of solidarity with Santrich.

Meanwhile, Byron Yepes, a former commander who was reported to have been killed in 2009, only to resurface alive and still fighting in 2011, announced on July 17 that he would not take his seat in the lower house due to health concerns. He was replaced by Sergio Marín, who became the youngest of the 10. Marín is a key political figure who lived a double life in the mid-1990s, working with the guerrilla group while still a full-time economics student in Bogotá until escalating violence forced him to flee the capital for the jungle.

Other potential leaders among the new members of Congress include two women: Victoria Sandino, who rose to become the official spokeswoman for the FARC’s female fighters, and Sandra Ramírez, the widow of the longtime FARC leader Manuel Marulanda.

All of the FARC representatives will be competing with more mainstream forces on the political left. Iván Duque’s rival in the presidential race, Gustavo Petro, was a popular if controversial mayor of Bogotá from 2012 to 2015, and has militant credentials of his own as a former member of the M-19 revolutionary movement. He won 43 percent of the vote this past June, and will most likely lead the opposition against the new president.

Despite the obstacles, the task facing the FARC is not an impossible one. Across Latin America, many former rebels have laid down their arms and successfully entered politics. Uruguay’s beloved former president Josè Mujica served 13 years in prison during the country’s military dictatorship for his role in the Tupamaro guerilla group. El Salvador’s president, Salvador Sánchez, is an ex-rebel whose former comrades in arms hold at least a dozen seats in the legislature.

However, the political careers of several others have ended ignominiously. Peru’s Yehude Simon served eight years in prison for his crimes against the state as a guerrilla before becoming governor of Lambayeque and later, prime minister. But he resigned in 2016 after two controversial laws infringed on indigenous land rights and led to deadly clashes between police and civilians in what became known as the Bagua massacre. Brazil’s Dilma Rousseff, who was jailed from 1970 to 1972 for her role in the left-wing militant group VAR Palmares, was impeached as president in 2016 for alleged fiscal malfeasance.

President Daniel Ortega of Nicaragua makes for an even worse role model. In addition to abolishing constitutional term limits and appointing his wife as vice president, Ortega has gutted the country’s democratic institutions and mismanaged the economy, and he is currently using extralegal violence to crush popular protests. The irony of his cruelty is that in 1979, as a Cuban-trained guerrilla fighter, he helped topple dictator Anastasio Somoza, who engaged in many of the same repressive tactics.

To convince skeptics that it can avoid such pitfalls, the FARC will have to demonstrate a genuine commitment to democratic principles and the national interest of Colombia as a whole.

The FARC could bolster its legitimacy in civilian politics—and the legitimacy of the peace agreement itself—by helping the Colombian state to deal with illegal armed groups that have moved to fill the vacuum created by its own withdrawal from armed conflict and the drug trade. For example, the leftist ELN (National Liberation Army) has initiated peace talks with the government, but it may be presented with a less attractive bargain than the one offered to the much larger FARC. The new president can be expected to grant fewer concessions and adopt a harsher stance than his predecessor. If the FARC were to play a constructive role in bridging the gap between the two sides, it would likely reap political rewards.

Both the FARC and the new administration would also do well to remember the overall insurgency’s origins as a response to popular discontent with dramatic wealth disparities in the country and violent suppression of peaceful activism. Today, Colombia still ranks as the seventh most unequal country in the world and places second among its Latin American peers. People in marginalized regions continue to suffer from a lack of economic prospects and violence directed at local activists, and they have yet to reap the rewards of the peace agreement. Although the historically right-wing state and the leftist FARC have been enemies for decades, it is in both of their interests to address these long-standing problems through the nation’s democratic institutions, because they will clearly not be solved on the battlefield.