Voting has been postponed in many locations, but there are ways to minimize the damage. 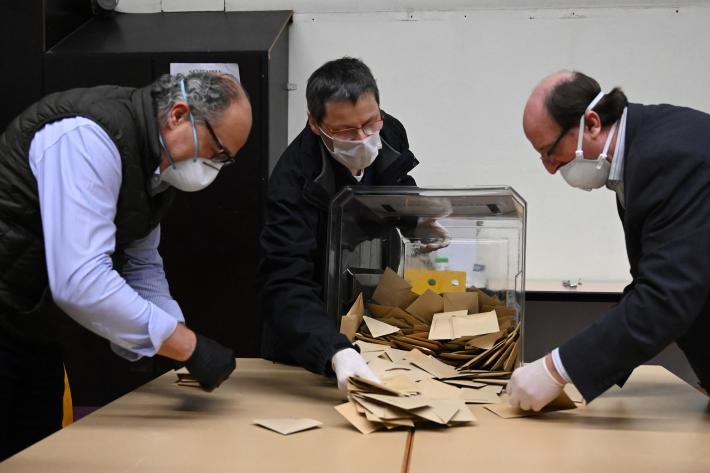 Electoral workers wearing protective masks and plastic gloves carry out the counting of ballots after the first round of Frane's mayoral elections at a polling station in Strasbourg. Photo Credit: FREDERICK FLORIN/AFP via Getty Images.

As the coronavirus spreads across the United States, at least 14 states have now postponed their primary elections. While the postponement of electoral activity may be justified from a public health perspective, it is important to be cognizant of the effects that the coronavirus is already having on democracy, both in the United States and around the world.

Such postponements can have a significant impact depending on their circumstances, potentially disenfranchising certain voters, eroding the legitimacy of incumbent leaders, or undermining public trust in democratic institutions.

For example, in the Democratic Republic of Congo in 2018, voting for the presidential election was postponed in three regions for three months amid outbreaks of the Ebola virus and interethnic violence. While few people denied the extreme circumstances, the affected regions were strongholds of opposition to the incumbent president, who was attempting to install his chosen successor after controversially clinging to office beyond the end of his final term two years earlier. Voters in the three regions were essentially disenfranchised, as their opportunity to cast ballots came long after national results had been announced.

In Mali, a grinding insurgency in the north of the country has shaken what was once one of West Africa’s most stable democracies. Elections originally due in the fall of 2018 have been delayed repeatedly as a result of registration challenges and security concerns. The current election date in May could be pushed back further in light of COVID-19, which would presumably benefit the incumbent government. Even if that particular postponement were supported by legitimate public health priorities, it would contribute to a more general breakdown in the democratic system that is likely to outlive the viral outbreak itself.

Freedom House has recorded declines in political rights as a result of postponed elections in six countries over the past five years. Many of these countries suffer from major security threats or chronic poverty that has left their electoral infrastructure in a weakened state. But the coronavirus has brought the issue to the doorstep of even the world’s wealthiest and most powerful democracies, and their responses will set a benchmark for other countries facing disruptions large and small, well into the future.

There are a number of ways democracies can mitigate the damage caused by health-related election delays.

First, democracies should take all measures possible to allow free and fair elections to go forward. This may include adjusting voter-registration rules and polling-station procedures, encouraging early voting, and allowing vote-by-mail or other remote voting procedures where their integrity can be assured. Poll sites can be sanitized, and lines controlled through enforcing distance at sites and reduced through extended voting hours. Polling sites can also be added or moved, to better accommodate social distancing. Such reforms will make the electoral system more resilient in the face of this and any similar disruptions in the future.

Second, when postponement is the last option available, it should be implemented through legal means with broad political consensus. Governments must demonstrate that any postponement is necessary and proportionate—a last resort that is not taken lightly. The decision should be supported by ample public evidence of harms and other factors that make safe polling impossible, that can be confirmed by independent experts. Indefinite, extremely lengthy, or repeated postponements may be a sign that authorities are going beyond what it is necessary to secure public health.

Finally, decision makers should consult with a wide range of political and civil society actors before announcing a postponement. Consensus among political competitors and trusted nonpartisan institutions will help convince voters that the delay is legitimately in their interest and not a power grab by one party or another. Communication and transparency are crucial to prevent conspiracy theories and help stem misinformation.

As the world inures itself to increasingly draconian emergency restrictions, we must remember how crucial elections are to ensuring that we are governed fairly and effectively. Indeed, there is no better way to hold leaders accountable for their performance in a crisis like the COVID-19 outbreak. We should all take notice when elections are postponed, be prepared to assess whether the delays are primarily serving political ends, and be vocal in our protests if they appear illegitimate. And if in fact a postponement is warranted, we should work to guarantee that elections are reinstated as soon as conditions allow.