Russian authorities have rapidly closed the space for free expression online over the past year, and the heightened repression appears unlikely to ease in the near future. 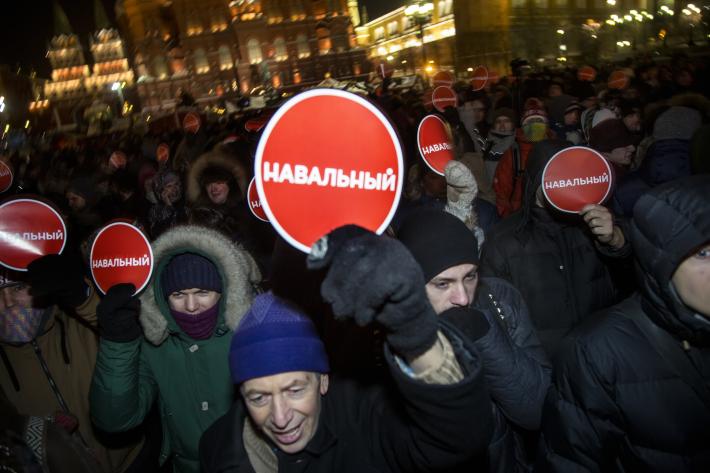 The Russian agency responsible for censoring online content, Roskomnadzor, was in full force last month ahead of the scheduled sentencing of Aleksey Navalny, a prominent Russian opposition figure and blogger, and his brother Oleg. On December 20, the agency issued a request to Facebook to block an event page for a planned protest on Moscow’s Manezh Square on January 15, which thousands of users indicated they would attend. (Facebook complied with the request, though it refrained from blocking subsequent event pages.) On December 30, when the sentencing was moved up in a bid to preempt the protests, Roskomnadzor issued warnings to four media outlets that reported on the sentencing and carried links to a video of Navalny calling for demonstrations. The agency claimed the sites had posted content that was inciting extremism.

Prior to 2012, these blatant moves to censor political content online might have been surprising. Censorship of online content in Russia was then largely focused on instances of religious extremism or content related to drugs or suicide, and blocking of political content primarily targeted low-profile websites. While most of the state and private broadcast media continued to churn out Kremlin propaganda, critical voices survived on the internet, the last relatively free space for dissent.

In the face of crises over the past year, however, the government has expanded its arsenal of tools to restrict and control the online sphere, employing them against criticism or activism deemed to be a threat to the political leadership. This increased repressive activity has resulted in a steepening decline in internet freedom for Russian users, and the new tactics are likely to be the government’s standard approach moving forward.

On March 13, 2014, as tensions mounted over the scheduled referendum on Russia’s annexation of Crimea, the authorities orchestrated what Amnesty International called a “full scale onslaught” on the few remaining independent media outlets, with the prosecutor general issuing orders to block three high-profile websites—Grani.ru, a news site known for its criticism of the Kremlin, particularly the crackdown on and subsequent prosecution of the Bolotnaya protesters in 2012; Ezhednevny Zhurnal (Ej.ru), a news and opinion site; and Kasparov.ru, the website of opposition figure Garry Kasparov. These actions were authorized under Federal Law No. 398, signed by President Vladimir Putin on December 30, 2013, authorizing the prosecutor general to order ISPs to block any websites containing “extremist content” or “calls for unauthorized public actions.” In the first half of 2014, Roskomnadzor blocked an additional 85 websites for containing “extremist content,” based on orders from the prosecutor general’s office.

In addition to outright blocking, websites that report on controversial political events or deviate from the Kremlin narrative face other, more insidious forms of pressure, with potentially significant consequences. For example, on March 11, 2014, Roskomnadzor issued a warning to Lenta.ru, one of the oldest and most widely read Russian news sites, for its publication of an interview with one of the leaders of the Ukrainian nationalist group Right Sector who took an active part in clashes with police during the Euromaidan protests in Kyiv. The next day, prominent businessman Aleksandr Mamut, who controls Lenta.ru’s parent company, dismissed editor in chief Galina Timchenko without explanation and replaced her with a government relations specialist, Aleksey Goreslavskiy.

In response, 77 correspondents and members of the editorial staff posted an open letter on the website, stating that the dismissal of Timchenko amounted to government censorship and a violation of the law on mass media. In addition, 39 of these staff members resigned in protest.

Once one of the country’s primary sources of independent news online, Lenta.ru registered a dramatic drop in readership the following month, as the entire outlet was effectively restructured. It has since seen a growth in readership, albeit from a different segment of society, as the website’s content now consists primarily of government-friendly propaganda.

Control over formal news sites is only part of the Kremlin’s internet strategy. Given the importance of social media and user-generated content, it has also sought ways to ensure direct access to individual users’ data, augmenting an already massive surveillance state.

Beginning in December 2013, Pavel Durov, the founder and chief executive of Russia’s leading online social network, VKontakte, reported that the Federal Security Service (FSB) had sent him requests to hand over the account data of several Euromaidan activists. He refused to comply. Previously, the FSB had also issued orders for VKontakte to block pages associated with Navalny. In April 2014, Durov announced that he was resigning due to this ongoing pressure and left the country. In September, the e-mail provider Mail.ru, owned by Kremlin-friendly businessman Alisher Usmanov, officially took control of VKontakte.

Not all social media companies operating in Russia are under the Kremlin’s influence, however, and last year the State Duma passed two laws to remedy this problem. The so-called “bloggers law” (Federal Law No. 97), passed in May 2014, stipulated that any blog or website with over 3,000 daily viewers must register with Roskomnadzor as a media outlet, subjecting it to restrictions such as bans on anonymous authorship or the use of obscenities. The final draft of the law also contained a provision requiring companies such as Google, Facebook, and Twitter to host Russian internet users’ data on servers located within Russia—a rule that was then expanded through another law passed in July (Federal Law No. 242) that requires the same data-localization policies for any internet companies processing Russians’ data. While these laws create significant challenges for internet companies (if they choose to comply), they also make it even easier for Russian intelligence agents to access the communications data of Russian internet users, particularly activists and opposition figures who may then face arrest and prosecution.

While the online sphere may still provide more space for freedom of expression than broadcast or print media, that space is steadily shrinking. The new strategies of censorship and pressure that the government employed last year to crack down on critical media coverage of the crisis in Ukraine are now consistently being used to discourage any significant political dissent online. As the Russian government faces mounting economic and political challenges in the coming year, this heightened repression likely represents the new status quo for the Kremlin’s approach to internet regulation.