Cracking Down on Artistic Expression: Another Strike against Russian Democracy

Despite the Kremlin’s efforts to suppress dissent in artistic spaces, Russian art and culture find ways to persist, flickering against the darkness of civic repression. 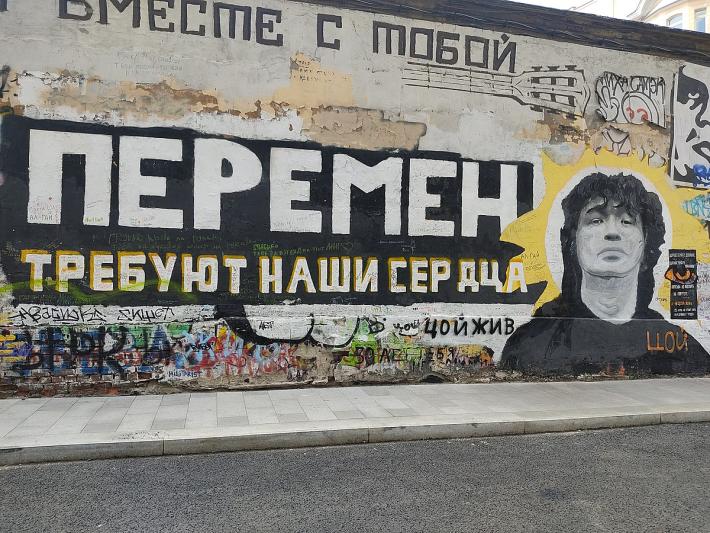 Our Hearts Demand Changes graffiti on the Tsoi Wall, Moscow, 2022

There is a section of the New Tretyakov Gallery in Moscow where one turns a corner and the art transforms from the Soviet to post-Soviet era—an explosion of color, emotion, gore, heart, and the freedom that 1991 hearkened spreading across wall after white gallery wall. This captures the powerful mix of opportunity and possibility that defined the Russia of the 1990s. Today, the brutal persecution of the Russian artistic community has destroyed an integral piece of democracy—bringing an end to the dreams of freedom displayed on the New Tretyakov’s gallery walls.

A state-led censoring of the arts

Since the Russian invasion of Ukraine on February 24, the Moscow regime has eliminated any opportunity to express independent perspectives in the country—enforcing a politically homogenous public through a potent combination of legislation and propaganda. Russian authorities have arrested and detained almost 20,000 antiwar activists and pursued more than 3,400 criminal cases against citizens for any infraction deemed to discredit Russian forces. Propaganda media guides assert stringent policies for outlets to discuss the invasion and ongoing war along government lines, helping complete a total social “purification.”

This crackdown extends to arenas of art and culture which served as important spaces in civil society throughout the 1990s and 2000s, when lines between art and activism blurred. Citizens’ ability to make sense of and express their perspectives through art is a crucial tenet of democracy in any society—only made more urgent and valuable as citizens endure personal and political crises which spur its necessity. Over the past decade, the regime has carefully lowered its tolerance for politically-provoking art, using broad legal jurisdiction to censor the arts around pro-Kremlin lines.

Since the start of the war on Ukraine, authorities have raided concerts in Moscow and fined musicians, including legendary rockstars Andrei Makarevich, Yuri Shevchuk, and Boris Grebenshchikov, over antiwar expressions. Legislation has placed dissenting filmmakers and writers on wanted lists, proposed book bans equating queerness in literature with pornography, and blatantly censored art exhibitions to comply with Russian National Security Strategy. On June 29, the Moscow Cultural Department dismissed the leaders of three prominent theaters, including the Gogol Center, a prominent, beloved oppositionist theater known for its community spirit and alternative visionary mission in Russian culture.

Refusal to cooperate under strict sociopolitical conditions means harsh consequences for dissenting artists. In March, theater management across Russia began pushing their teams to make public pro-war statements, and many fired cultural workers over their open criticism of the war. The 15th annual ArtDocFest, Russia’s largest documentary festival, was canceled after Russian nationalists attacked its director. In April, playwright Mikhail Durnenkov posted his hopes for a defeated Russia on Facebook to find his account immediately flooded with threats. Signatories of an antiwar petition quickly lost work, including director Dmitriy Krymov, whose performances were canceled in Moscow. Prior to the war, film and television management circulated stop lists of Russian actors who held dissenting views in 2021, systematically purging artists who did not politically conform.

In the face of repression, artists fight back

In this harsh environment, the artistic community must also grapple with its place in Russia while the horror in Ukraine unfolds. Artists’ outrage at their country’s unjustifiable attack on Ukraine quashes their willingness to create. Journalist Vadim Smyslov captures the Catch-22 that artists face, saying, “To condemn the war in Russia has become a de jure crime. But to ignore it is a de facto moral crime.” Moscow contemporary art museums Garage and GES2 have shuttered in opposition to the war. The selected Russian representation to the 2022 Venice Biennale exhibition, Alexandra Sukharevna and Kirill Savchenkov, dropped out, unwilling to engage in art while civilians die in Ukraine. Elena Kovalskaya, director of Moscow’s Vsevolod Meyerhold State Theater and Cultural Center, resigned her post the day after the war began. Thousands of Russian citizens, including masses of cultural workers, have fled Russia for safer third countries, where they are free to express their perspectives on the war in art. In their absence, pro-Putin, “patriotic” artists have taken the stage in Russia, vowing never to leave the country “as others have.” Even centuries-old treasures of Russian art have fallen victim to this propaganda machine: Andrei Rublev’s beloved Holy Trinity icon was removed from the State Tretyakov Gallery over the summer to serve in a pro-war ceremony led by Patriarch Kirill and ruined in the process.

Despite countless risks, Russian art and culture find ways to persist, flickering against the darkness of civic repression. Indigenous art communities in Russia continue to develop and revive traditional folk art, seen in the ongoing rehabilitation of Crimean Tatar art and in artist Polina Osipova’s artistic revival of Chuvash culture in fashion. Artists and activists have covered public spaces across Russia in antiwar messaging. Artists in safe third countries use the freedom of expression found elsewhere to protest against the war and support Ukraine, including Russian music stars Noize MC and Monetochka, who are touring Europe with their “Voices of Peace” concert series to raise money for Ukrainian refugees. Art captures public perspectives in a way that other democratic processes cannot fully encapsulate. The Kremlin’s crushing suppression of artistic freedom in the country is a blow to more than the individuals or community—it is a strike against democracy and human rights in the country on a scale unseen since the Soviet era.