Crimea Is Ukraine, and Dozhd Isn’t the Tip of the Russian Spear

The rage against critics of the National Radio and Television Council’s sudden decision to ban cable broadcasts of the Russian television channel Dozhd in Ukraine is understandable but misguided. 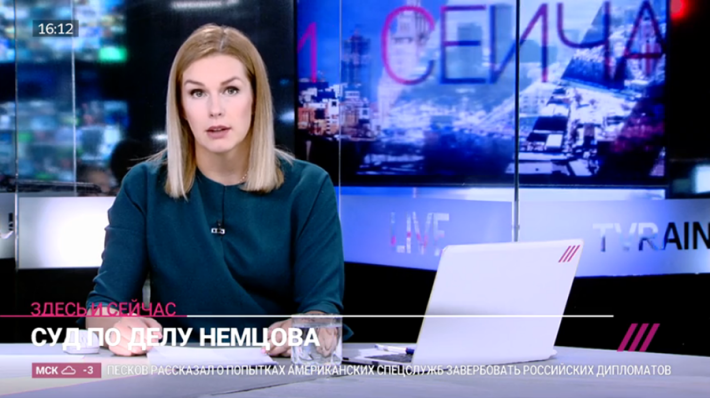 A news presenter at Dozhd. © https://tvrain.ru/teleshow/here_and_now.

This article was originally published in Ukrainian by Ukrayinska Pravda.

The rage against critics of the National Radio and Television Council’s sudden decision to ban cable broadcasts of the Russian television channel Dozhd in Ukraine is understandable but misguided.

The council based its decision on the fact that Dozhd “broadcast stories with information attesting to the non-recognition of and infringement upon the borders of Ukraine,” mainly a map of Russia showing Crimea as Russian territory. Ukrainian territory is occupied by Russia, which has unilaterally changed the course of Ukraine’s history. Ukrainians rightfully ask why they should allow Russia to broadcast across Ukrainian territory its often hateful and misleading messages aimed at undermining Ukraine and its democracy.

This is a question many countries are asking, with new revelations about Russian interventions and hybrid-war tactics emerging seemingly every day.

The voice of the world is loud and clear on the true status of Crimea: Crimea is Ukraine and Russia has tried to illegally annex it.

Censorship is prohibited in Ukraine under the constitution as well as the human rights commitments Ukraine has made under the International Covenant on Civil and Political Rights and the European Convention on Human Rights. Ukrainians are guaranteed broad latitude to say and share what they think, including support for non-violent separatism or other ideas or policies that anger or offend many people. Of course, freedom of expression is not without limits; governments can take reasonable steps in extraordinary circumstances to restrict freedom of expression if they are necessary in a democratic society, or if they are aimed at preventing propaganda of war and incitement to violence. However, the restrictions should be proportional to the threat and narrowly defined; otherwise, the government should generally stay out of the way.

Is banning Dozhd’s broadcast necessary to preserve democracy here? Was banning the broadcast of the channel a proportionate measure, and what was the purpose of such a decision?

The law cited by the National Radio and Television Council bans broadcast of a number of types of expression in Ukraine, including propaganda of aggressive war; calls for the violent overthrow of constitutional order; incitement to hatred; and popularization or propaganda of the organs or actions of aggressor governments that claim the occupation of Ukrainian territory to be lawful.

If a television station were broadcasting bomb-making instructions to separatists in Donbas, then restricting its broadcast might be an appropriate response: It would be a response to a real, immediate, and grave danger to society. If a television station broadcast reflected the abhorrent position of the Russian government that Crimea is part of Russia—policies already familiar to all Ukrainians—is the broadcast a call to violence and does it need to be blocked?

Given the strength of Ukrainian democracy and civil society, broadcasts that reflect Russia’s aggression and political claims do not present an immediate danger. Moreover, Ukrainians are capable of understanding that journalists and media in Russia cannot have completely independent editorial policies (and that if Dozhd reflected the Ukrainian government’s position, there would be no Dozhd). It’s a mistake to believe that a Ukrainian audience shouldn’t have access to objectionable views, including those that challenge the policies of their government or the opinions of a vast majority of the public.

It’s striking that many people supporting the new ban did not object until the council’s decision. Dozhd’s broadcasts have been retransmitted here for years, remain easily accessible on the internet, and will continue to be available online despite the ban.

Dozhd became a real Russian propaganda tool only after the council’s decision. Comments on social media likened Dozhd to a Nazi or Islamic State publication such as Dabiq, which, unlike Dozhd, actually does recruit terrorists and call for violent action. Commentators demanded that critics of the decision consider whether Russia Today would be restricted in the United States if it showed maps of Russia that included Alaska.

Would restricting access to the view that Alaska is part of Russia be necessary in a democratic society? The answer is “no.” Was Dozhd calling people to violence, and does the survival of Ukraine’s democracy require restrictions on Dozhd? Almost certainly “no.”

According to some reports, Ukrainian viewers account for 25 percent of Dozhd’s total audience. Indeed, Dozhd has significant value, because it contributes to a richer, more pluralistic media environment by providing relatively high-quality and propaganda-free insight into the decisions and policies of the Russian government, what Russians think, and how Ukraine and other countries are perceived in Russia.

One recent analysis concluded that Dozhd was balanced in its coverage and did not display the anti-Ukrainian bias demonstrated on other Russian television stations. Ukrainians need and deserve access to the greatest number of voices, including accounts that challenge prevailing narratives.

In the interest of a free, vibrant, and pluralistic media environment in Ukraine, policymakers, regulators, journalists, ordinary people, and the international human rights community should consider several questions: Were there other options for the Ukrainian government to consider, instead of banning the channel from cable networks, such as the toolbox to respond to the challenges of propaganda prepared by the Organization for Security and Co-operation in Europe (OSCE)? Did lawmakers and the council seriously consider how to allow channels like Dozhd to contribute to the diversity of Ukraine’s media without running afoul of the law? What is the effect on citizens and their ability to scrutinize and analyze media and current events if they have access only to limited, approved perspectives? And does Dozhd pose such an existential threat to Ukraine that the only solution was to cut it off?