Crisis in Belarus: Questions and Answers about the Protests and Crackdown

Francišak Viačorka of the Belarusian Institute of America explains the context of the ongoing antigovernment demonstrations—and offers advice on how the international community should respond. 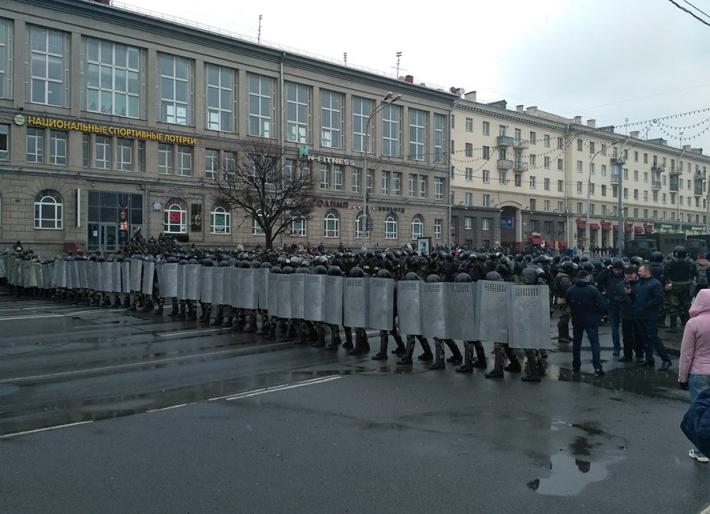 Francišak Viačorka of the Belarusian Institute of America explains the context of the ongoing antigovernment demonstrations—and offers advice on how the international community should respond.

What prompted the current wave of protests?

Mass protests in Minsk and the provinces at their beginning were directed against a controversial January decree by President Aliaksandr Lukashenka that strengthened a tax on the unemployed. According to authorities, 470,000 people (in a total population of 9.3 million) who officially worked fewer than 183 days a year should pay $180 annually “to support government services.”

For Belarusians, with an average monthly salary of $380, this is quite a lot. Many people take seasonal jobs in Russia, Ukraine, and Poland, sending money to their families. The tax was imposed during a general economic downturn, with stagnating markets and rising costs of living. In small towns, where state-run employers prevail, it is hard to find a job with a compensation higher than $150 a month. That is why a lot of regional protests were really self-organized by “common people,” sometimes with no participation by the political opposition.

Is it really a “near-revolution”?

The situation is very tense but not revolutionary. Lukashenka, in office since 1994, is probably having the toughest time in his presidential career, and his recently favored tactic of pretending to balance between the West and Russia—to receive loans and accommodations from both and save the failing Belarusian economy—is not working anymore. People are exhausted by Lukashenka, but still remain shocked by horrifying pictures from the crackdown on the 2014 uprising in Kyiv and the war in Ukraine’s Donbas region. They are not eager to see that sort of violence in Belarus.

Nevertheless, despite the state television mantra, “if not Lukashenka then war,” people have come to the streets en masse again after a five-year break. Protests took place in 13 cities including the capital and gathered about 20,000 people before March 25. The next major wave of protests is scheduled to take place at the end of April or on May 1. A part of the opposition is already intent on adding some sociopolitical sharpness to these vastly outdated Soviet-style spring holidays.

How did the March 25 crackdown unfold?

Every year, on March 25, the opposition in Belarus commemorates “Freedom” or “Independence Day,” marking the proclamation of the independent Belarusian People’s Republic in 1918, before the Bolsheviks took control of the country and incorporated it into the Soviet Union. During Lukashenka’s rule, Freedom Day has not been a celebration but a protest against the authoritarian and pro-Russian government.

This year, the action was fueled by the social protests against the tax on the unemployed—known as the “anti-parasites tax”—that had gained momentum across the country since February. In contrast to previous years, the government did not issue permission even for a “traditional” March 25 rally in the suburbs of Minsk, instead making all March 25 demonstrations formally illegal.

In anticipation of a large turnout, the area of the proposed gathering place near the Academy of Sciences was blocked off by thousands of fully armed and masked riot police officers, with guns, shields, and batons. Dozens of water cannons, detention vans, and military vehicles occupied all neighboring streets. Anyone who tried to get close to the academy building was detained, including foreign journalists. Police broke down the crowd of several thousand participants, many carrying the banned white-red-white national flag used in 1918 and in the first years of post-Soviet independence, into small groups. Officers then attacked and detained at least 700 people, including the elderly, journalists, and random passers-by.

According to one detainee, “There were two masked riot policemen standing at the entrance to the police van and beating every detained person with batons. Those who gave even the slightest resistance were pushed onto the floor and mercilessly beaten. Inside the van, masked riot policemen were beating each and all except for women. They tore up people’s clothes, brutally searched them, and deleted all photos from the detainees’ smartphones.” After a few hours, many participants were released without explanation. The several hundred who were jailed stood trial on Monday (many trials are still ongoing), facing fines or jail sentences of 5–25 days. 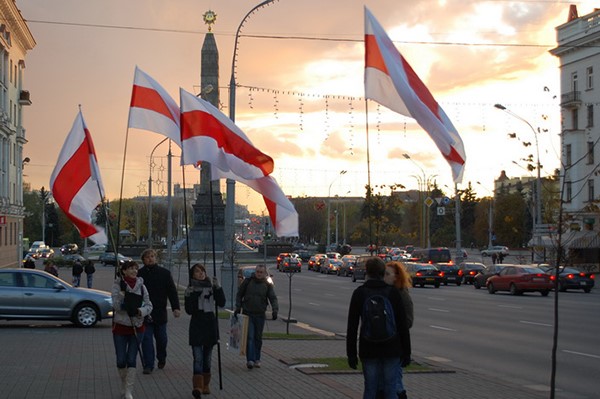 Who are the protesters? Are babushkas really against Lukashenka now?

This time around the protesters can be split into three distinct groups. First, the traditional opposition supporters—primarily students, young professionals, and democracy activists. They are usually the first ones targeted by police and jailed. Many of them will lose their jobs or will be expelled from universities, as occurred in the aftermath of the disputed presidential election in late 2010.

The second group would be ordinary citizens—including grandmothers, or “babushkas”—and state-sector employees in the regions beyond the capital. Their participation is a new phenomenon for Belarus’s political space. This group has been the primary bloc of voters supporting Lukashenka over the decades, but the economic crisis has pushed them to question the responsibility of the system, the regime, and Lukashenka personally for their deepening poverty and even food shortages. For this group, improvement of their economic status is a critically important goal.

Finally, the third group is made up of initiatives coordinated through social media, anarchists, and soccer fans (“ultras”). They are especially threatening for authorities because they do not have a clear governance structure and use unpredictable methods of nonviolent protest, which makes them hard to neutralize. The events in Ukraine in 2014 showed the critical role of organized soccer fans in youth consolidation, so the Belarusian government targeted its initial damage-control measures, including preventive arrests and propaganda films, exactly at these groups.

Most importantly, all protest groups (except, perhaps, for the anarchists) concur on the demand for Lukashenka’s resignation, carry historical Belarusian white-red-white flags, and use pro-independence slogans like “Žyvie Biełaruś!” (Long Live Belarus!)

What is Russia’s role in this crisis?

There is no evidence of Russian participation in organizing these particular rallies. The people behind these protests are active participants in the pro-democratic, pro-independence movement in Belarus. It is notable that those who declared several months ago their readiness to support Lukashenka in facing a potential Russian invasion were among the first to be jailed.

The president’s administration is playing a sophisticated diplomatic game, openly suggesting that Russia inspired the protests in order to destabilize Belarus and damage its improved relationships with the West. However, over the last several days Belarusian state TV has aired immense amounts of anti-Western rhetoric. Poland, Lithuania, and Ukraine were accused of supporting still-unidentified “extremists” who sought to destroy the famous Belarusian stability and cut the country’s friendly ties with Russia. The crackdown on March 25 could be a signal of loyalty to Putin, a statement by Lukashenka that there will be no Kyiv-style uprising in Belarus.

If not Lukashenka, then who? The opposition appears divided.

Indeed, there appears to be little unity among the opposition leaders. Since the December 2010 crackdown, the Belarusian democratic movement has been disjointed. Some former presidential candidates became a sort of “loyal opposition”; others, like Andrey Sannikau, had to emigrate; thousands of activists were fired from their jobs; students expelled from Belarusian universities continued their education abroad. Many people never came back to politics.

For now, there are two major blocs in the opposition. One is the strongly anti-regime “Belarusian National Congress,” led by former presidential candidates Mikalai Statkevich and Uladzimir Niaklajeu. The second is the “Center-Right Coalition,” formed by several major political parties, including the Belarusian Popular Front and the United Civil Party. Both blocs are pro-Western. Statkevich, as a former political prisoner who served his full term without ever asking Lukashenka for a pardon, is regularly attacked by pro-regime media and by fellow oppositionists for being “too radical.” He was kidnapped by Belarus’s KGB just before the protest on March 25 and released three days later, having been accused of preparing a coup d’etat.

The recent crackdown may have negative long-term consequences not just for political parties, but also for human rights defenders, independent media, cultural initiatives, and many civil society organizations that receive support from the West. However, there is a chance that recent events will consolidate existing groups.

How should the West respond?

The European Union and the United States have been very cautious in their reactions. Although both issued statements of concern on March 25, strong language has often been absent from their official rhetoric, despite the aggressive anti-Western messages uttered by the Belarusian president. Western decision-makers apparently still hold out hope that Lukashenka will stop using violence and release all new prisoners, so that the dialogue can continue and the March 2017 crackdown can be remembered as a small mistake by police commanders.

However, civic groups and activists in Belarus expect the repression to grow even stronger. If Western leaders still wish to bring Belarus into their fold, they should stop ignoring the plight of Belarusian civil society, which is overwhelmingly pro-Western and pro-independence by conviction. This neglect is absolutely detrimental to the future of a free and independent Belarus.

The position of the United States will become clearer in the next month. The Trump administration has to make a decision by April 30 on whether to resume sanctions against nine Belarusian state-owned companies, which were temporarily lifted in 2015 after Lukashenka released all political prisoners at the time and won his fifth presidential term in staged elections that were largely free of violence. A standby invitation was sent to Lukashenka to attend the celebration of the 100th anniversary of the U.S. entrance into the First World War in Kansas City next week. It will be curious to see if the invitation gets revoked, or if geopolitical interests will once again trump universal human rights values.