Regional leaders’ handling of a term-limit dispute could either strengthen or undermine recent democratic progress. 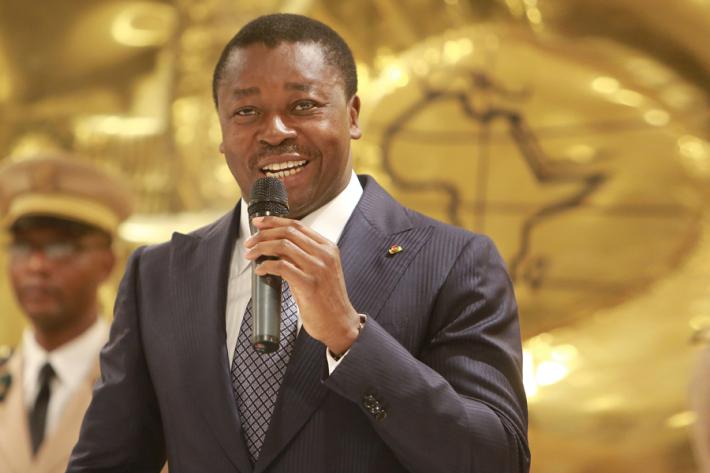 Regional leaders’ handling of a term-limit dispute could either strengthen or undermine recent democratic progress.

After playing a leading role in a historic transfer of power in The Gambia in 2016, the Economic Community of West African States (ECOWAS) is at risk of seeing its rising reputation weakened. Perhaps surprisingly, the reason is a small country that has remained relatively quiet in regional and international affairs: Togo.

Faure Gnassingbé, the president of Togo, has overseen deeply flawed and biased elections since he was installed by the military after the death of his father, longtime president Gnassingbé Eyadéma, in 2005. The father had ruled the country using strongman tactics since coming to power in a 1967 coup.  While the son has made some attempts at reform, he has proven equally capable of using violence in response to protest and dissent.

For the first time in years, President Gnassingbé’s grip on power may be in jeopardy. In August 2017, protests erupted in Sokodé, Togo’s second-largest city. Security forces killed two people while trying to break up the initial demonstrations, but the protests quickly spread to Lomé, the capital, and within a month there were reports of between 100,000 and a million people on the streets of Lomé (out of Togo’s total population of some 7.6 million). Since then, Lomé and other cities have periodically been shut down for days or weeks at a time amid protests and strikes by businesses, health workers, teachers, and others. They are demanding an end to the Gnassingbé family’s reign.

From the beginning, something about these protests seemed different from previous bouts of demonstrations, particularly the government’s reaction. Police made arrests, and authorities temporarily shut down social media, but they did not respond with the same ferocity as in years past. In 2005 protests, for example, hundreds were killed, but the death toll over the last year is far lower. The prolonged strikes, lengthy rallies, youth involvement, and the rhetoric of the protest leaders all indicate that people will not just go home this time. The more measured response from security forces, and the concessions granted to protesters in negotiations to date, suggest that the government is aware of the changed dynamics.

On February 15, Togo’s coalition of opposition parties entered into dialogue with the government, with mediation by Ghanaian president Nana Akufo-Addo. The talks so far have yielded some results, with the government agreeing to “pardon” and release 45 people who were detained because of their involvement in the protests, and to send other detainees to trial. However, both sides are stuck on the central issue of presidential term limits.

The government has agreed to reintroduce term limits, which were included in Togo’s 1992 constitution before it was changed by Gnassingbé Eyadéma in 2002. At the time, he also lowered the minimum age for the presidency from 45 to 35—his son was then 36. But the current proposal would not apply retroactively, allowing President Gnassingbé to run for reelection two more times. He and his allies are extremely unlikely to accept a future in which he leaves office, since the state, the ruling party, and much of the economy have been essentially run through him since the death of his father. The opposition insists that the government proposal is a tactic to buy time, and does not believe that the president would step down even after two more terms. They will probably not accept any scenario that allows him to run again.

The opposition has more leverage now than ever before. The government has been unable or unwilling to end the protests by force. Many of the protest leaders are young and don’t remember some of the violent crackdowns of decades past. Some operate anonymously. And they have been able to successfully mobilize a large, frustrated youth population that lacks employment opportunities. Moreover, Togo’s economy and international relations have been damaged by the unrest, just as the government seeks to rebrand the country as a business-friendly African version of Singapore or Dubai.  The cancelation of an Israel-Africa summit that Togo was scheduled to host last year, due to “security concerns” related to the protests, was embarrassing for the government.

President Gnassingbé suddenly finds himself lonely in West Africa, where many leaders are increasingly vocal supporters of democracy and have promoted democratic transitions.  These leaders mounted a military intervention to enforce the results of a democratic election in The Gambia, compelling outgoing president Yahya Jammeh to concede and step down. President Muhammadu Buhari of Nigeria came to office in 2015 following a relatively smooth process that marked the country’s first peaceful transfer of power to an opposition party through elections. Ghana has long been praised for its democratic stability and transparent elections. In Burkina Faso, former president Blaise Compaoré’s effort to extend his time in office, in violation of the constitution, ultimately led to his ouster in 2014. And in Benin, where people share many of the same ethnicities as the Togolese, President Patrice Talon proposed a bill last year to limit all presidents to one term.

Gnassingbé has been chairman of ECOWAS since his one-year stint began last June. He is the last remaining head of state who voted against the ECOWAS proposal for regional term limits in 2015. Had it passed, this would have been a historic step forward for democracy in the region, and in Africa as a whole. The only one to join Gnassingbé in blocking the change was Jammeh, whose subsequent exit from The Gambia was negotiated by Gnassingbé’s predecessor as ECOWAS chair, Ellen Johnson Sirleaf of Liberia. But the term limit proposal had required unanimous approval, and the issue has not been raised again since.

As chairperson, Gnassingbé was tasked with leading talks over the disputed election results in Liberia last year. The irony of someone who has never competed in a free and fair election mediating another country’s election dispute is obvious. Gnassingbé’s actions in Togo and in ECOWAS indicate that he will remain a drag on the regional bloc’s democratic agenda.

The people of many ECOWAS states have embraced democracy, and these states have made notable progress in building democratic institutions. The Togolese people have seen this progress, and are eager to replicate it at home. Given his initial reaction to the protests, Gnassingbé seems to understand this. But his leadership role in ECOWAS will end in June, and he doesn’t need to be reminded about what happened to Jammeh. All of these factors increase the pressure on him.

To break the current impasse, the protesters, the government, or both must signal that they are willing to compromise on term limits—and they may need a push from ECOWAS. A peaceful, democratic outcome in Togo could make the organization one of the world’s strongest and most successful regional bodies in terms of upholding democratic norms, solidifying the gains that it has already made and making further progress more likely. But if the stalemate continues, the internal politics of ECOWAS will become more complicated, and democratic progress in the region will be impeded.

Should the Ghana-led mediation fail to produce an adequate outcome, ECOWAS leaders will have decisions to make regarding the organization’s role in the crisis, particularly once Gnassingbé is no longer the chair. To bolster its position as a model for regional democracy promotion, ECOWAS should use the power and example of its member states to pressure Togo to fully commit to democratic governance.