Crisis in Venezuela: ‘Right Now We’re Trying to Save Lives’

A human rights activist says the humanitarian crisis can only be resolved with steady pressure from a broad international coalition. 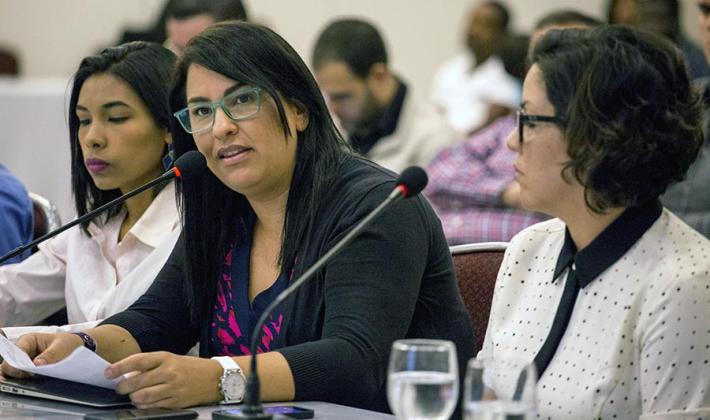 Beatriz Borges (center), representative of the Venezuelan organization Cepaz (Peace and Justice Center), speaks during a hearing at the Inter-American Commission on Human Rights in 2018. Credit: ERIKA SANTELICES/AFP/Getty Images.

A human rights activist says the humanitarian crisis can only be resolved with steady pressure from a broad international coalition.

Beatriz “Bibi” Borges is the director of the Center for Justice and Peace (CEPAZ), a Caracas-based human rights organization that was founded in response to mounting human rights abuses by the Chávez-Maduro regime. In a recent interview, Freedom House’s Arch Puddington asked her about Venezuela’s humanitarian crisis, the role of the international community, and the damage done by years of antidemocratic rule.

Arch Puddington: The opposition’s campaign to get humanitarian aid into the country has failed so far. What is your take on this effort?

Beatriz Borges: As human rights defenders, we have made clear that humanitarian assistance should not be politicized. Politicizing aid is counterproductive, and will only delay delivery of essential help to the people who need it. That is why we say humanitarian aid should be handled by nonpolitical technical entities such as UN agencies and civil society organizations. But it is urgently required and should be delivered immediately, because people are suffering and dying.

Have you experienced harassment from the state in the course of your human rights work?

Yes, we have been receiving threats aimed at trying to stop our work, especially in cases involving the defense of people who have been tortured or died in custody. We do our work in a very risky environment.

Do you think democracy can be restored in Venezuela without violence?

I hope so. But it is a fact that many Venezuelans are too tired to resist after 20 years of fighting for democracy. The solution must be peaceful, and based on the principles of international human rights. But unfortunately, the regime is showing that they are not willing to find a peaceful solution.

The Maduro government has the military, plus paramilitary units and colectivos—a whole infrastructure of formal and informal security forces. Given this multilayered repressive apparatus, how do you influence the regime?

We in Venezuela cannot contend with the military and the other security forces. We need the international community to apply pressure from the outside. Our best weapon at this moment is the documentation of abuses and denunciation before international organizations.

International solidarity is critical. The United States cannot do it alone. Many believe that US policy is based on geopolitics and economic motives. This is what Maduro’s government wants everyone to believe. We will never resolve the current crisis without a united international movement where everyone is pushing in the same direction. But I consider that so far American policy has followed diplomatic steps looking for a solution.

Under Presidents Bush and Obama, the US played a more quiet role in the regional diplomacy surrounding conditions in Venezuela. The policy was to let neighboring countries take the lead. But that didn’t work either. So if the US doesn’t play a prominent role, the government may be able to resist outside pressure, but if the US does assert itself, Maduro and other critics will argue that it is engaging in “imperialism.” How does Washington get out of this bind?

Since 2014 we have argued that you cannot offer a simplistic solution to what is a very complex problem. If real democracy is to be restored, it will require a united effort by an international coalition, with Venezuelans playing the leading role. The response must combine humanitarian aid and protection for human rights, as well as democratic reforms. In other situations like Venezuela’s, the US faced the same bind, and time has shown that it was not real, so if critics raise it, they are just simplifying and diminishing the problem at hand.

Do you ever have exchanges with Russia, China, or Iran about the dreadful conditions in Venezuela, conditions that you and others have carefully documented?

It’s not possible; these countries see only what they want to see. They are not interested in human rights conditions, only in economic gain. The pervasive corruption under Maduro is a factor as well. We once had great petroleum wealth. But the regime wasted that wealth through corruption and by using the wealth to control the people. Those governments are part of the Venezuelan corruption system.

In Syria, Bashar al-Assad was not unhappy to see millions of citizens flee the country, as it depopulated communities that opposed him and apparently strengthened his control. Is something similar at work in Venezuela?

Maduro doesn’t concern himself with the fate of Venezuelans. If he were concerned there would have been humanitarian help years ago. The government simply denies that there is a crisis. Of course, when people flee the country, the regime strengthens its control.

When did you first come to feel, as a Venezuelan, that democracy was under threat in your country?

This has been a gradual process of deterioration and erosion of democracy. But the critical point came in 2015, when the democratic opposition won control of the National Assembly and the government moved to marginalize and disempower it. The National Assembly has effectively been replaced with a constituent assembly that is totally controlled by the regime. That was the final blow to democracy in Venezuela.

That happened after Maduro took office in 2013. Were there any events under Chávez that sent a bad signal?

Absolutely. Conditions under Maduro are the result of years of democracy’s decline. Under Chávez, institutions were devastated; we can say he is responsible for the destruction of democracy. We almost lost formal institutions—they devastated everything. People have no recourse to acts of injustice. Having lived under these conditions for practically all their lives, students today do not know what real democracy means.

Thoughts about the future?

We don’t know what will happen. But we do know that the humanitarian emergency will still exist even if there is political change tomorrow. Right now we’re trying to save lives in Venezuela. The regime treats humanitarian help as a political act and jails those who try to assist people in crisis. In today’s Venezuela, even humanitarian work is risky.