Environmental movements often use the most fundamental tools of democracy to advance their goals. They’re also one of the most at-risk groups of activists working today. 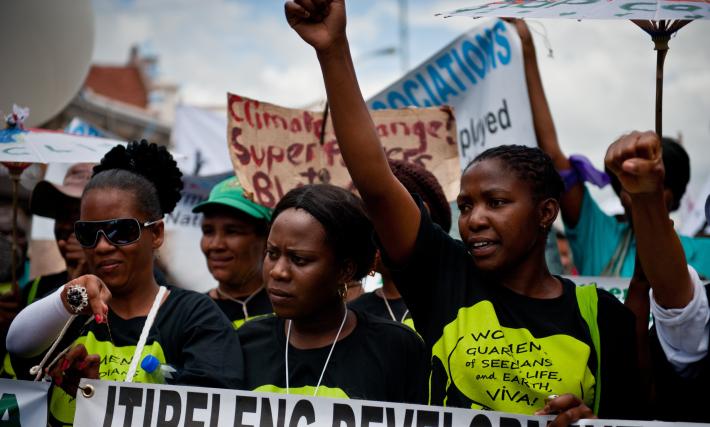 As the annual UN Climate Change summit begins in earnest, members of Egyptian civil society known as the Egyptian Human Rights Coalition on COP27 are calling for November 10 to be an international day of solidarity with political prisoners of the Sisi government. Matthew Hale,  Senior Program Officer with Freedom House’s Emergency Assistance Programs, explains how environmental rights defenders are at the forefront of democratic activism, the dangers they face, and the problem of hosting one of the world’s foremost environmental forums in a country that persecutes them.

How does environmental and climate activism fit into the broader defense of democracy and human rights?

Historically, environmental rights defenders have often been the front end of the wedge in criticizing authoritarian governments. An example that comes to mind is in the Baltic states, where the environmental movement was a key change actor during the fall of the Soviet Union. In many countries where the civic space is under attack, a direct call for democratic reform would be too confrontational for the authorities to tolerate, whereas criticism of environmental disasters has a level of organic popular support and credibility because it so directly impacts ordinary citizens’ lives. When people’s children are dying from drinking polluted water, or subsistence farmers find their lands turning barren, those are very difficult criticisms for government to suppress or dismiss.

There are many misconceptions and under-told stories about environmental and climate activists as democratic actors. Stories of teenagers throwing soup at a Van Gogh painting earn clicks and shares, but painstaking, decades-long work to hold local officials accountable on land, environment, and climate issues isn’t often reported—even though these activists, particularly Indigenous people, face disproportionate risk for their work. Of the 54 land and environmental defenders killed last year in Mexico, 40 percent were Indigenous.

I think the hosting of COP27 in Egypt—which is deeply problematic, but I’ll get to that—is an important moment for the democracy and human rights community to reflect on the important role land and environmental defenders play in this field. Climate change will have an enormously destabilizing effect on democracy, driven by food insecurity and more extreme weather events, which in turn will lead to conflict and record levels of migration.

Who is leading these movements?

Most of the people fighting on the front lines against environmental and climate degradation aren’t on the cover of TIME magazine or giving press conferences on the sidelines of the UN General Assembly. They’re farmers, community leaders, grandmothers, just trying to protect their homes, families, and livelihoods. The coalition is tremendously diverse. There are also now multiple generations of younger activists, particularly in low-lying lands across the global south, who are already experiencing the tangible reality of climate change in their day-to-day lives.

The Lifeline Embattled CSO Assistance Fund, which is led by Freedom House, had the privilege of working with an incredibly dynamic activist in the Philippines who was on the path to becoming a doctor but learned that if climate change was not averted, the very medical school where he was studying would be underwater within decades due to rising sea levels. He now works with communities across the Philippines, where environmental and land defenders are systematically targeted and killed for their activism. He talked of the kinds of underrepresented environmental defenders I mentioned earlier—one story that has really stuck with me is that of the 69-year-old woman whose resistance to a destructive hydropower project in her community got her illegally arrested and literally dragged out into the street by the Philippines authorities this past June.

How are the challenges and risks faced by environmental defenders unique from those faced by other human rights defenders?

The people defending environmental, climate, land, and Indigenous rights are one of the most at-risk groups in the activist space. Three people are killed every week trying to protect their land from extractive forces. In terms of the specific threats they face, there’s a pretty consistent set of tactics that authoritarians use to put down civic activity: militarized response to protests, death threats, assassination. There’s also digital repression now, namely, using social media and astroturfing accounts to smear environmental organizations as anti-economy or anti-development, or implying they’re foreign agents.

One of the most-used tools by governments for stymying activists is the SLAPP, which stands for “strategic lawsuit against public participation.” This is when regimes keep civic organizations tied up in endless lawsuits based on trumped-up charges, usually with the assistance of politicized courts, with the aim of wearing the activists down—their morale or their bank accounts, or both.

Land, environmental, Indigenous, and climate rights defenders also face threats from corruption within extractive industries. Last week, a UK subsidiary of the mining giant Glencore was ordered to pay more than £275 million (roughly $315 million) for bribing officials in African countries to gain access to oil, and investigative reporting previously uncovered efforts by a Canadian mining company to sway elections in the Democratic Republic of Congo. We’re also seeing robust efforts by Beijing to strengthen its influence in countries where Chinese resource-extraction companies operate. In autocratic countries—especially countries that are run by a military junta, such as Thailand, Myanmar, or Cambodia—the authorities are deeply connected to extractive industries like mining companies. So they have a vested interest in keeping environmental activism to a minimum.

We treat environmental defenders just like any other group of civil society actors—we don’t engage in political activities to support their cause, but our Emergency Assistance Programs can provide direct support when defenders are targeted for trying to exercise their right to free association and assembly. For example, we have helped civil society organizations pay for legal counsel that enables them to keep doing their work while also fighting SLAPPs, as well as helped activists facing death threats to evacuate to a safer location.

Environmental movements are often using the most fundamental tools of democracy to advance their goals: community organizing, local protests, meetings with local authorities. That’s part of why Freedom House is working so hard to support these activists—because they’re using the civic mechanisms available to them, which represent core tenets of democracy.

What action do you want to see from governments to support environmental and land rights defenders, both in the context of COP27 and more broadly?

First and foremost, we have to think critically about who gets to host these conferences. It is deeply problematic that COP27 is being hosted by the Egyptian government, which actively imprisons environmental activists for their research and for the questions they raise. The United Arab Emirates will host COP28, which is equally problematic. Regardless of who hosts COP, I would love to see greater inclusion of civil society organizations from the global south and from the countries most immediately and acutely affected by climate change.

Second, there’s often a silo between those working on environmental and climate policy, and those who pursue climate activism through a human-rights lens, so it would be great to have more collaboration between those groups.

The third thing I’d press for is strong anticorruption policies. Megaprojects like industrial mines and hydroelectric dams are magnets for corruption. Money from the World Bank and other major financial institutions goes to support these projects, but often ends up lining the pockets of corrupt officials.

Broadly speaking, as the world pivots to a greener economy, we have to include civil society in that process and invite scrutiny of how that transition is impacting communities.

Learn More About Our Emergency Assistance and Thematic Programs

Since 2007, Freedom House has been providing assistance to frontline activists and civil society organizations at their moment of greatest need. It has helped them survive attacks, given them the means to resume their critical work, and in many cases literally saved lives.