A Cry for Help from Serbia’s Independent Media

The increasingly authoritarian government has steadily broken down press freedom over the past four years. 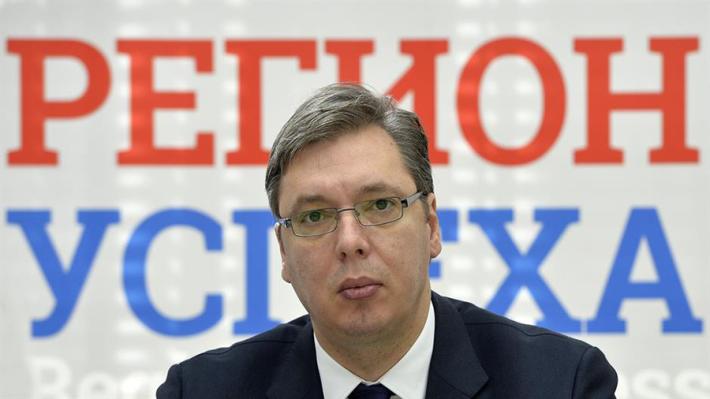 The increasingly authoritarian government has steadily broken down press freedom over the past four years.

Some 150 Serbian news outlets and advocacy groups organized a collective blackout last month to draw attention to the dire state of media freedom in the country, replacing websites with nearly blank screens and the statement, “This is what it looks like when there is no free press.”

While it did not mention him by name, the protest was clearly aimed at President Aleksandar Vučić, who since coming to power as prime minister in 2014 has sought to squeeze critical media out of the market and discredit the few journalists with the funds and fortitude to keep working. 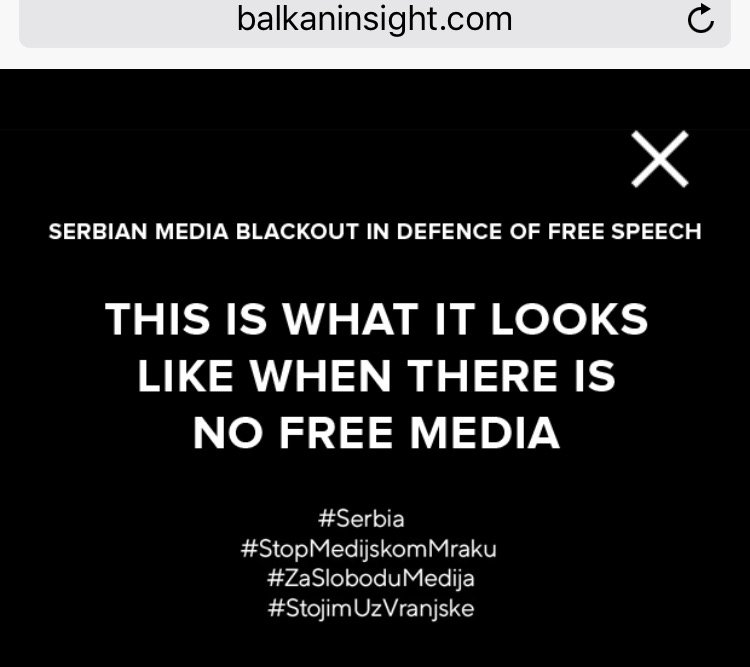 Vučić’s fear of the independent press is understandable, as investigative journalists have made a habit of embarrassing his government. Among other recent accomplishments, they—along with protesters—have forced Vučić to admit that Belgrade officials were responsible for covert, illegal demolitions in the city’s Savamala district; spotlighted Interior Minister Nebojša Stefanović’s failure to stop the destruction; exposed the fact that a state anticorruption drive’s highly publicized criminal allegations rarely result in convictions; and scrutinized the mysterious origins of €200,000 with which Defense Minister Aleksandar Vulin bought his home. (Vulin’s widely mocked explanation was that he borrowed the money from a generous in-law in Canada, and was not required to declare it to customs authorities because he brought it over in installments of less than €10,000.)

This work is all the more remarkable given the Vučić government’s prolonged campaign of harassment against independent media, which has helped to drive down Serbia’s score in the annual Freedom of the Press index. In the most recent edition, which covered events in 2016, Serbia posted one of the largest single-year declines among all of the 199 countries and territories assessed. 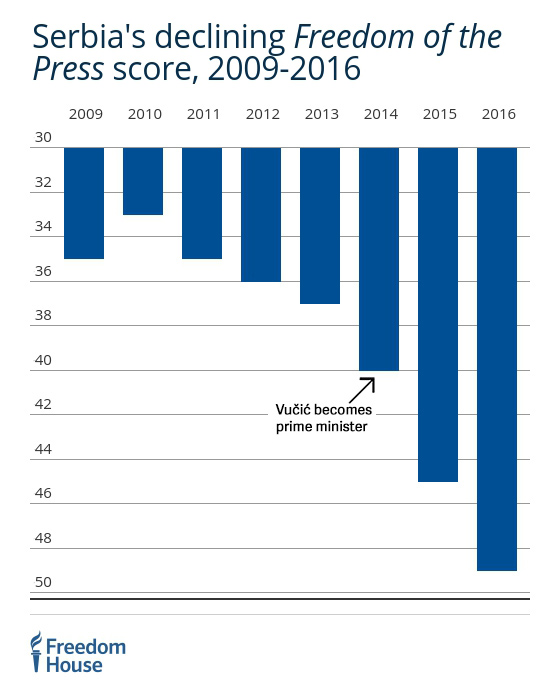 Serbian journalists have been lauded this year by prominent international organizations, but at home they face arbitrary tax investigations, choked-off advertising revenue, and outright intimidation, including personal smears splashed across the pages of government-allied newspapers.

The price of independence

One recent tax investigation targeted the local newspaper Vranjske novine, which was highly regarded for its reporting on corruption and organized crime, after it published an interview with the director of the local tax authority. The probe was categorized as “urgent” by authorities and lasted weeks, but never produced charges of wrongdoing. According to editor in chief Vukašin Obradović, it nevertheless contributed to the paper’s closure.

A similar case against Adria Media Group, one of the largest publishing companies in Serbia, played out over the summer. After the group’s Kurir tabloid carried sharp criticism of Vučić, its bank accounts were frozen by tax officials in June and again in July.

Meanwhile, media firms that are more friendly toward the government receive generous rewards. According to the Center for Investigative Journalism of Serbia (CINS), Pink International Company, the media conglomerate that operates the vociferously pro-Vučić broadcaster TV Pink, was granted more than €7 million in public loans between June 2014 and January 2016, despite being named in 2014 as one of the largest tax debtors in the country.

A 2016 report for the Center for International Media Assistance (CIMA) highlighted the case of the local television station Lastavica, owned by Bratislav Gašić, the intelligence chief whose vulgar harassment of a woman journalist once sparked a protest movement. The station’s license was revoked after it failed to pay certain fees, but it continued broadcasting without interference, and over €100,000 in fees and associated fines against it were eventually dropped.

Another tool the government uses to sideline critical media is the preferential allocation of state advertising contracts. Some contracts are clearly awarded with ulterior motives. For example, the state electricity and water enterprises regularly run advertisements in certain outlets with small audiences, despite the fact that these utilities have no private competitors and could in any case reach more people through other media.

Moreover, private companies are wary of advertising with independent outlets. The daily Danas suffered a rapid cancelation of advertising contracts after it failed to support Vučić’s candidacy in the 2017 presidential election. For their part, many progovernment media carried front-page advertisements, purchased by the ruling Serbian Progressive Party (SNS), that promoted Vučić’s bid.

Politicized advertising is not the only malign influence on the media market. A recent privatization drive, undertaken as part of Serbia’s preparations for eventual EU membership, had the perverse effect of contributing to media concentration and clouding ownership structures. The process also effectively left some influential outlets, including the newspapers Politika and Vecernje novosti and the news agency Tanjug, under state control. The privatization’s deficiencies were attributed in large part to regulatory agencies’ dereliction of the various responsibilities assigned to them.

Even as independent outlets’ domestic sources of revenue drop away, foreign governments are facing pressure to scale back their support, according to Marija Sajkas, an expert on media and the Balkans. Sajkas notes that foreign embassies are becoming reluctant to award grants to critical news sources directly, for fear of causing a diplomatic rift with Vučić. She describes the country’s independent journalists as passionate individuals who frequently work for low pay and on a project-by-project basis, funded in part by periodic advertisements from democracy-minded organizations like the Konrad-Adenauer-Stiftung Foundation and occasional supplements from the Ministry of Culture and other actors. The fragility of such a model is plain to see.

Independent outlets that have managed to survive in this environment face increasingly vicious verbal attacks from both government figures and progovernment competitors.

Journalists who criticize the government are typically tarred as traitors, social degenerates, and tools of the mafia or foreign intelligence agencies. In the wake of the recent exposé by the award-winning Crime and Corruption Reporting Network (KRIK) on Vulin’s questionable home purchase, KRIK editor in chief Stevan Dojčinović was called a drug addict in a statement by Vulin’s political party, the Movement of Socialists. The document added that “Dojčinović was paid from abroad for every article that attacks Vulin” and that “anyone who loves Serbia and who fights for it, Dojčinović hates immensely.”

Smears of government opponents, including journalists, in the pages of progovernment media—notably the daily Informer—are a routine occurrence that draws no reaction from authorities. When pressed to respond, Serbian officials insist that their commitment to media freedom precludes any intervention. (In a similar vein, “Uncensored Lies,” a 2016 government-backed exhibit staged in a Belgrade art gallery, portrayed critical journalists as liars but noted that the state’s tolerance of such “lies” illustrated Serbia’s free media environment.)

The hostile messages carried in Serbia’s newspapers are amplified by morning television and radio programs that begin discussion by surveying the day’s print headlines. In this way, according to Sajkas, people are “led to believe that they are well-informed” because they hear the same messages from different sources. “It’s beyond propaganda,” Sajkas says, referring to the ubiquity of progovernment disinformation. “People used to be able to decode government propaganda, but now tabloids like the Informer are just feeding people lies.”

A call to action

Additional threats to media freedom in Serbia include the stacking of public broadcasters with government loyalists; defamation lawsuits; threats and other extralegal intimidation, particularly against women journalists; and physical attacks for which perpetrators enjoy impunity.

Despite these constraints on the flow of information, there is still strong domestic opposition to Vučić and his authoritarian tendencies. This was evident during a protest movement against irregularities surrounding Vučić’s election as president in April. The demonstrators called out public media for unequal coverage of the candidates, and their demands included not just stronger democratic institutions and Vučić’s resignation, but also the resignation of senior officials at the public broadcasters and the Authority for Electronic Media. These media-related grievances grew after public and progovernment outlets ignored or downplayed the size of the protests, with the Informer trotting out familiar claims about roguish demonstrators who were few in number but nonetheless posed a grave security threat.

Periodic admonishments from the EU, the OSCE, and international advocacy organizations have failed to prevent the alarming deterioration of Serbia’s media sector. If they are to protect the small cadre of independent journalists working to hold Vučić’s government to account, these groups will have to sharpen their denunciations of flagrant violations, such as menacing smears and bogus financial inspections, and call attention to less visible factors like market manipulation and politically compromised regulators.

They must also step up financial support for independent media, ensuring that high-quality investigative journalism remains a viable alternative to cynical government narratives. Vučić and his allies seem to understand that unfettered reporting could help to consolidate democracy, strengthen independent institutions, and expose networks of corruption. The question is whether the international community understands this too.