The Death of Press Freedom in Cambodia

The state has steadily purged critical voices from the information landscape ahead of national elections in July. 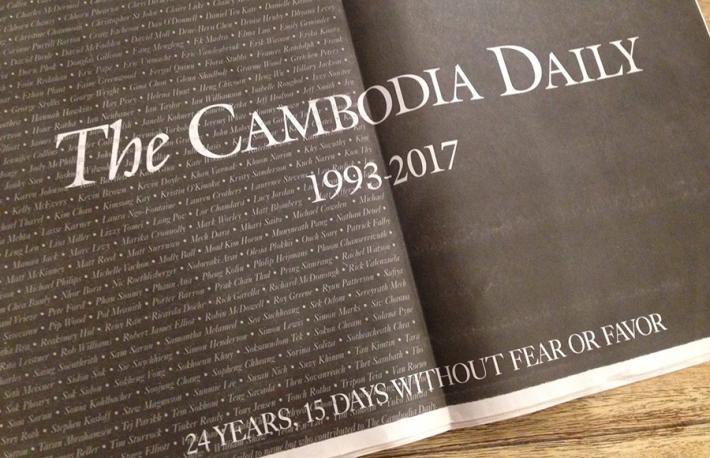 The state has steadily purged critical voices from the information landscape ahead of national elections in July.

Regarded by many observers as the last vestige of independent media in Cambodia, the Phnom Penh Post was sold in early May to a Malaysian investor with links to Prime Minister Hun Sen. Almost immediately after this transfer of control, editor in chief Kay Kimsong was fired for publishing an article on the new owner, Sivakumar S. Ganapathy, and his connection to the Cambodian government. The article, which has since been removed from the paper’s website, highlighted Ganapathy’s role as managing director of the public relations firm ASIA PR, whose past projects literally include “Hun Sen’s entry into the Government seat.”

In the days following Kay Kimsong’s exit, several senior staff members either resigned in protest or were fired for refusing to take down the article in question. More than 20 current and former staffers signed a statement expressing their “disgust” at the new management’s decision, which they felt was “made in contradiction to the values of a free press that our hardworking staff have upheld since 1992.”

A statement from former and current staff at @phnompenhpost: pic.twitter.com/UdEvENZLUJ

The Post’s demise as an independent paper is a monumental loss, but it did not come as a surprise. Over the last few years, Hun Sen’s government has delivered a series of crippling blows to media freedom, wiping out the small body of autonomous outlets that had survived earlier crackdowns. The campaign has effectively silenced opposition voices ahead of national elections in July.

In September 2017, the Cambodia Daily, a rival of the Post that had also strived for independent English-language reporting, was forced to close its doors after the government tax department “leaked” via the progovernment site Fresh News that the paper owed $6.3 million in back taxes. The supposed tax bill was widely seen as politically motivated retaliation for the Daily’s critical coverage. The prime minister called the paper a “thief,” asserting that it had not paid taxes in a decade and ordering it to “pack up and go” if it could not meet its obligations.

The monolithic nature of television in Cambodia is no secret—most coverage consists of official statements and ceremonies, speeches by Hun Sen, and military parades. Many news consumers consequently turned to radio, but that medium too has been hit hard by government pressure in recent years.

U.S.-backed Radio Free Asia (RFA), which has provided independent reporting to Cambodia for nearly two decades, was forced to close its Phnom Penh office and suspend operations in the country in September 2017. A few weeks earlier, 32 FM radio frequencies across 20 provinces were ordered to be shut down. This was especially devastating to the more rural parts of the country, which rely heavily on radio for information due to limited or completely nonexistent internet access.

A culture of fear and repression

In addition to targeting major media outlets, the ruling Cambodia People’s Party (CPP) has used intimidation tactics against individual journalists, political opponents, and dissidents, threatening them with arrest and violence. A report released in February 2018 by the Cambodian Center for Independent Media (CCIM) found that nearly 85 percent of the journalists surveyed considered the country’s media climate to have deteriorated, in contrast to the optimism felt by many in earlier surveys. Ongoing government interference has led many journalists to believe that authorities look for excuses to persecute them, photographing them and denying them access to the National Assembly, among other venues. The CCIM also found an increase in those who had been physically or verbally attacked or threatened.

In July 2016, Kem Ley, a well-known government critic and political activist, was shot dead in broad daylight at a gas station. An alleged gunman was quickly imprisoned for the crime, but many observers have expressed suspicions of foul play by the Cambodian government, and organizations including the Committee to Protect Journalists and Human Rights Watch have called for an independent and impartial commission of inquiry to investigate the murder. In 2017, political analyst Kim Sok openly suggested that Kem Ley was assassinated by the CPP—an accusation that led to an 18-month jail sentence for incitement and defamation and an unconscionable $200,000 fine to be paid to the prime minister himself.

An arrest warrant was issued in June 2017 for activist Sam Sokha after she appeared in a video throwing a shoe at a sign that had Hun Sen’s image on it. She fled to Thailand and was given refugee status by the Office of the United Nations High Commissioner for Refugees (UNHCR), but a Thai court forcibly returned her to Cambodia in February 2018. Sam Sokha was quickly apprehended and transferred to prison, as she had been convicted in absentia in January.

On May 13, 2018, Cambodia made its first arrest under a lèse-majesté law passed unanimously by the parliament in February. Kheang Navy, a 50-year-old primary school principal, was taken into custody for comments on Facebook that allegedly criticized the monarchy and its suspected role in dissolving the opposition Cambodia National Rescue Party (CNRP). A second man was arrested on similar charges this week.

From surveillance to character assassination

The government’s persecution of its critics includes intrusive electronic surveillance, hacking, and smear campaigns. A Law on Telecommunications passed in December 2015 grants the state broad authority to monitor public and private communications. Since 2017, hackers have targeted opposition activists, journalists, and lawmakers by trying to hijack their email and social media accounts, which are typically hosted by international companies such as Google and Facebook that may be beyond the reach of more direct government censorship and surveillance.

Buddhist monk and human rights activist Loun Sovath was one of the victims of this hacking, losing access to a Facebook account with some 60,000 followers. He has long been a vocal critic of government policy, particularly surrounding forced evictions and land rights, and of the violent methods used by authorities to silence dissidents. For years, Loun Sovath has been threatened with arrest, faced charges of “incitement to commit a crime,” and been banned from temples and pagodas.

Six months ago, two former reporters for RFA, Oun Chhin and Yeang Socheameta, were arrested under fabricated charges of treason and espionage. In March 2018, more unfounded charges were added by the prosecutor, who claimed without evidence that they had produced pornography in violation of Cambodia’s Law on the Suppression of Human Trafficking and Sexual Exploitation.

In June 2017, Australian documentary filmmaker James Ricketson was arrested for using a drone to film an opposition rally and continues to be held on a spying charge that could lead to 10 years in prison. Ricketson described his situation as clearly politicized, as no evidence has been found supporting the charges against him. Moreover, state-controlled media have run stories implicating him as well as the CNRP in “a conspiracy to conduct a color revolution” and overthrow the government.

It is unclear how independent journalists and activists can continue to function under current conditions in Cambodia, particularly given that the government has faced no significant penalties from the international community for its ruthless attacks on press freedom and democracy. The country is scheduled to hold national elections in July, but with no real opposition party allowed to participate and no independent media left to provide objective coverage, Hun Sen and his repressive regime have already won.

Atitya (Tia) Chhor is the daughter of Cambodian immigrants and a former publications and research intern at Freedom House. She is pursuing an MS at NYU's Center for Global Affairs with a concentration in human rights and international law.