At a recent gathering in Texas, activists from around the world sought moral and practical support from the United States and other democracies. 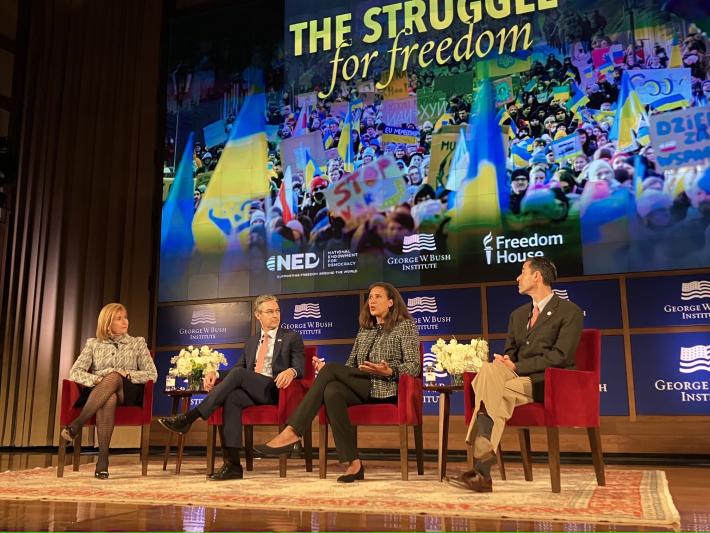 Freedom House's Nicole Bibbins Sedaca joined Daniel Twining of the International Republican Institute, Damon Wilson of the National Endowment for Democracy, and Former Under Secretary of State for Global Affairs Paula Dobriansky for a discussion about the global struggle for freedom at the George W. Bush Institute in Dallas on Nov. 16, 2022.

One of the privileges of serving as president of Freedom House is the opportunity to engage directly with human rights defenders. In a world where authoritarian powers are steadily chipping away at fundamental freedoms, it is always inspiring to hear the perspectives of political activists, civil society leaders, journalists, and others who have focused their life’s work on pushing back against dictatorship.

My latest such opportunity came at a conference last week in Dallas, hosted by the George W. Bush Institute in partnership with Freedom House and the National Endowment for Democracy. The gathering, entitled “The Struggle for Freedom,” was meant both to celebrate and to mobilize meaningful support for the brave efforts being undertaken by activists in countries—including Russia, Venezuela, Myanmar, and Zimbabwe—where freedom has been under fire.

The conference felt particularly timely given promising developments in recent months that point to an eventual reversal of the dismal trends recorded by Freedom House, which has identified a steady decline in political rights and civil liberties over the past 16 years. In Iran, massive protests against the regime have shown no sign of dissipating despite an appalling crackdown, while the Ukrainian people are moving heaven and earth to defend their democracy in the face of Moscow’s full-scale invasion. Prodemocracy protests have been erupting with regularity all over the world in the past several years, from Belarus and Sudan to Hong Kong, Thailand, and Sri Lanka.

While many of these movements have been put down, in some cases brutally, the persistent and widespread demand for freedom is what gives me hope for the long term. David J. Kramer, executive director of the Bush Institute, Damon Wilson, president of the National Endowment for Democracy, and I put an emphasis on this point in an op-ed last week in the Dallas Morning News. Each of our organizations devotes considerable resources and energy to supporting those who resist oppression, and we called on the United States and other democracies to do more on their behalf.

“Some of these democracy activists have had to flee their homelands and have found refuge here in the United States,” we wrote. “All of them hope to return to their place of birth and help their countries in the transition to a more democratic future. These courageous individuals remind us every day of the difference one person can make.”

During the conference, I moderated a panel featuring activists from different part of the globe, working on different crises. Each underscored the need for support from the democratic world. As Natalia Arno of Russia put it, “Solidarity is our biggest weapon against any dictatorship.”

“It’s impossible to do this fight alone,” said Rodrigo Diamanti, an activist who was forced to flee his home in Venezuela. “It’s just too hard. Fighting against a dictatorship is the most difficult fight that a society can have.… I know that Venezuela will be free, Cuba will be free, Nicaragua will be free, but it will only happen if we really commit to fight all together.”

Evan Mawarire, education director for the Renew Democracy Initiative, recounted his first step into democracy activism as a church pastor in Zimbabwe in 2016, when he recorded a short video about how his country had been destroyed by Robert Mugabe’s regime and how citizens needed to respond.

By the time he finally left the country in 2020, he had been jailed eight times, spent many months in a maximum-security prison, and been beaten, tortured, and threatened with further reprisals if he didn’t abandon his work. “But we didn’t. And what we saw was people who had been cowed into submission for years finding their voice and their strength to stand up and speak truth to power.”

Mawarire added, “The underestimation of the citizens of a nation to act for their own freedom is something that needs to change. People, when they have the right tools and the right connections, are willing to act, they’re willing to get involved, to fight for their democracy and their freedom.”

The activists on the panel, which included Nury Turkel, a Uyghur American who was born in a detention center in Xinjiang, called for stronger support from democratic governments. He noted that even living in exile has not eliminated the repression Uyghurs feel from the Chinese government, as they cannot contact their families at home for fear of exposing them to punishment.

Through their example, Turkel and his fellow panelists illustrated the great potential for progress in the global struggle for democracy, but their comments were also a pointed reminder of the scale of our unfinished business. There are countless people around the world who are still willing to make sacrifices to secure their basic freedoms. All they want is our solidarity and support. It is time to provide it.