Despite ‘Responsibility to Protect,’ the International Community Is Failing Burundi

Having missed opportunities to prevent the current crisis, the international community must now act decisively to halt the violence and push for a negotiated solution. 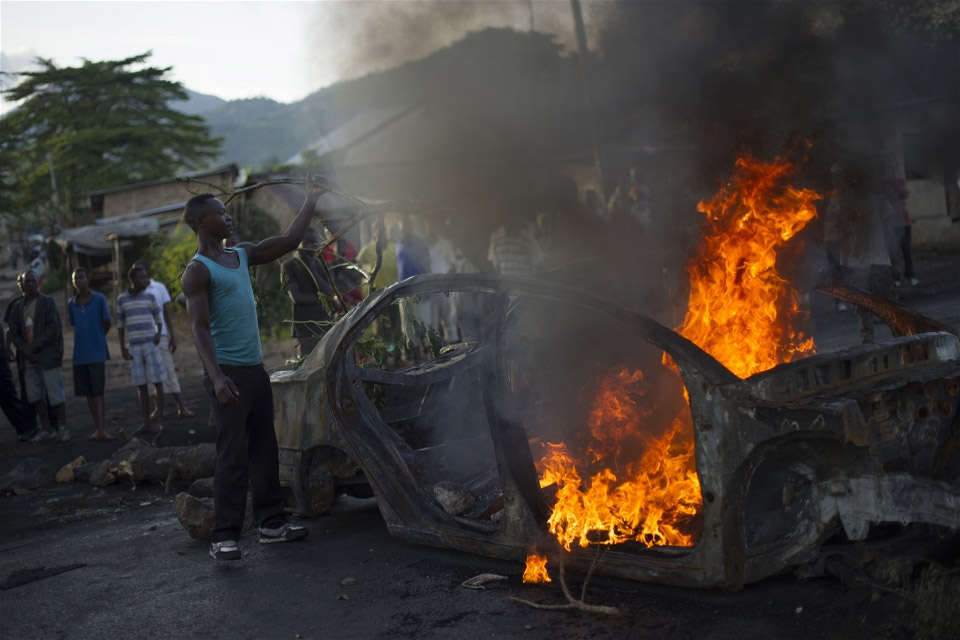 Having missed opportunities to prevent the current crisis, the international community must now act decisively to halt the violence and push for a negotiated solution.

In April 2015, President Pierre Nkurunziza's party announced his candidacy for a third term, in violation of the Arusha Accords, a political agreement that ended Burundi’s civil war in 2005. Despite months of protests, growing violence, and an opposition boycott, he claimed victory in a July election. Burundi has since spiraled into a state of chaos. Over 200,000 people have fled the country, and more than 300 people have been killed to date.

Given that the country’s last armed conflict killed an estimated 300,000 people between 1993 and 2005, the international community must remember its obligations under the doctrine of the Responsibility to Protect (R2P) and take action before Burundi collapses into another civil war.

The meaning of R2P

The R2P doctrine was first endorsed at the 2005 UN World Summit, emerging in response to the international community’s collective failure to prevent mass atrocities in places like Rwanda and the former Yugoslavia during the 1990s.

A failure to rebuild

A decade after the civil war ended, Burundi remains one of the poorest countries on the continent. In 2014 it ranked as the eighth-to-last country on the UN Human Development Index, with 42 percent of its income attributed to foreign aid. Meanwhile, restrictions on the opposition, political exclusion, and threats to civil society have persisted. Many Burundians have long felt unable to participate in government or have their views represented.

International aid agencies did engage the government in conflict mediation and economic development over the years, but the level of international attention remained low, making it easier for President Nkurunziza to violate the Arusha Accords. Had more resources been devoted to the rebuilding process, the country might have been in a better position to avoid renewed conflict.

A failure to prevent

The lynchpin of R2P is the “responsibility to prevent,” which holds that it is initially a state’s responsibility to provide a basic level of protection for its own people. If it does so, conflict is unlikely to emerge. The doctrine also emphasizes the importance of mediation before disputes erupt to violence. Despite the crucial role of this component of R2P, the international community missed several opportunities early this year to halt Burundi’s crisis at its initial stages.

Once it became evident that Nkurunziza had aspirations to remain in power, the international community should have acted swiftly to offer incentives for him to leave, even before he made an open bid for a third term. If this proved ineffective, early regional pressure could have made a difference. Indeed, the international community should have had a strategy for political negotiations in place well ahead of any planned elections, since political and ethnic tensions had not dissipated since the peace accords.

Instead, the international community, and particularly key regional players like Tanzania, were slow to react and unwilling to apply the pressure necessary to prevent a full-blown crisis. In addition, a lack of preparedness has left what civil society remains in Burundi unable to counteract the government’s abuses.

The case for action

The past failures of the international community now require it to react immediately, uniformly, and compellingly to stop the situation from deteriorating further. In the past month, the government has drastically increased its persecution of civil society. The son of a leading human rights activist, who himself was the target of a failed assassination attempt, was killed after being arrested. Prominent organizations have been shut down and had their bank accounts closed, making it impossible for them to speak out against or even document human rights violations for future adjudication.

Even more concerning, the geographic scope of abuses is spreading beyond the capital to border areas, where refugee camps have formed, and to emerging hotspots where youth militias are active and threatening local populations. Révérien Ndikuriyo, the president of Burundi’s senate, called last month for authorities to start “work,” using a code word that helped incite violence in the Rwandan genocide.

Under R2P’s “responsibility to react,” the international community must take strong measures to respond when a state does not protect its population from human rights violations, and Burundi presents a clear case of such a failure.

The international community has already demonstrated its ability to react effectively. When Nkurunziza set a November 7 deadline for people to hand in illegal firearms or “be sprayed like cockroaches,” the U.S. special envoy for the Great Lakes region paid a visit to the capital the same weekend, and violence surrounding the deadline was ultimately much lower than anticipated. The envoy’s presence, and the international attention it implied, may have saved many lives.

In order to stop further escalation, major international players must maintain a long-term, high-level diplomatic presence to show their seriousness in finding a solution to the crisis. Furthermore, the United Nations should deploy observers across the country to document human rights violations and hold the government accountable at a time when Burundian civil society is unable to do so. Increased international monitoring is likely to reduce the government’s sense of impunity.

Finally, those with influence over Burundi, such as neighboring Uganda and Tanzania, must press the government to negotiate in good faith with its opponents. The leadership will be far more likely to comply if regional players make it impossible for them to opt out and high-level observers are there to identify spoilers to the peace process.

The international community has already fallen far short of its responsibilities to rebuild and prevent, creating an opportunity for the crisis in Burundi to erupt. As conditions on the ground increasingly point to the possibility of civil war or genocide, it is imperative that the international community acknowledge its responsibility to react by intensifying its efforts to halt the violence and move the government toward a negotiated solution.