Governments are cordoning off swaths of the internet, with grave real-world consequences. Our research found that civil society groups are not only leading the push back—often, they’re winning. 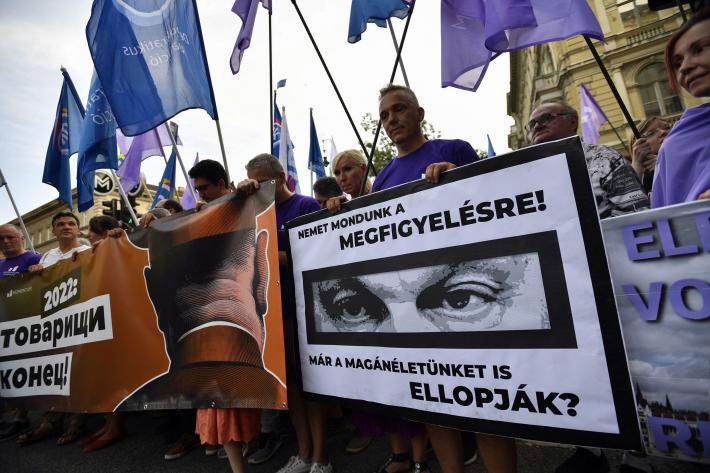 A man holds a poster showing Hungary's Prime Minister Viktor Orban reading: " We say no to your observation! Do you want me to steal our privacy?" during a protest against the Hungarian government for using Pegasus spyware to monitor journalists, opposition leaders and activists in Budapest, Hungary, July 26, 2021. REUTERS/Marton Monus

In Myanmar, prodemocracy activist Kyaw Min Yu, better known as Ko Jimmy, was executed after condemning the country’s military coup online. Rwandan Idamange Yvonne was sentenced to 15 years in prison for YouTube videos criticizing the country’s repressive president. In Nicaragua, authorities cited Facebook posts and tweets by journalist Miguel Mendoza Urbina in sentencing him to nine years in prison for reporting authorities deemed threatening to the integrity of the nation. And Siarhei Tsikhanouski, who became the face of the Belarussian opposition for his work running a YouTube channel critical of the government, was sentenced to 18 years in a maximum-security prison on charges of inciting unrest

These are only a fraction of the egregious cases documented in Freedom on the Net 2022: Countering the Authoritarian Overhaul of the Internet. Freedom on the Net is Freedom House’s annual survey of internet freedom, based on the simple idea that the same rights protected offline should also be protected online. Working with a network of civil society partners, we measure the subtle and not-so-subtle ways that governments, tech companies, and other actors protect or restrict human rights online in 70 countries.

Consistent with a broader decline in global freedom documented by Freedom House, we found that 2022 marked the 12th consecutive year of decline in internet freedom, with the steepest deterioration in Russia, Myanmar, Sudan, and Libya. More than three-quarters of the world’s internet users live in countries where the authorities punish people for their speech online. Forty governments—a record high—also blocked websites hosting political, social, or religious content, limiting the diversity of information people can access online. We also found, though, that when civil society pushes back against repression, under the right conditions they can win.

A global internet splintering into pieces

Developments in Russia clearly illustrate one of our key findings: governments are carving up the global internet to create online spaces they can control.

The Kremlin’s brutal invasion of Ukraine hastened Russia’s path toward digital isolation. International social media platforms and even more websites were blocked in its wake, and the remaining independent news outlets were pushed out of the country. Windows for Russian users to connect with people abroad have slammed shut: they have less opportunity to interact with those who oppose the invasion, and are left to navigate a version of the internet dominated by state media and largely scrubbed of reliable information from global sources about their government and about the war.

Regardless of the intention, human rights hang in the balance, particularly for users living in the most authoritarian countries or in backsliding democracies. On a splintered web, people have fewer avenues to connect with communities abroad and to freely express themselves. In countries where the state manicures the media environment to its liking, internet fragmentation means you have limited access to reliable information that could empower you to make more informed opinions about those in power. It’s also more challenging to hold human rights abusers accountable if people can’t share documentation of their crimes with audiences around the world.

A path forward for human rights in the digital age

Despite the alarming state of human rights online, we found reason to be hopeful: civil society is not only pushing back against digital repression—oftentimes, they are winning.

Digital rights groups have tirelessly researched, advocated against, and brought strategic litigation cases to overturn repression online. Media groups and whistleblowers have uncovered corruption in legislatures and board rooms. A cohort of democratic policymakers have distributed millions of dollars to internet freedom programs and reinvested themselves in cyber diplomacy. And many companies have made progress on being more transparent and building more secure products.

While there is still a long way to go, our research shows that these efforts are starting to yield results. This year had the largest number of score improvements since Freedom on the Net’s inception over a decade ago. With this progress in mind, democracies should recommit to preserving and advocating for an internet that is global, free, secure, and responsive to the needs of its users.

How to win the fight

The fight against digital repression requires deeper investment from governments and the private sector in civil society, which so often drives collective action. Nonprofit organizations, media groups, and activists have been behind much of the progress for internet freedom that we’ve documented. They’ve driven policymakers to reform restrictive laws, filed lawsuits that overturned state censorship, and pushed the private sector to improve content-moderation practices and resist state censorship demands.

Democratic leaders also need to protect internet freedom at home and abroad. At the national level, they should pass new laws that increase transparency around how companies operate, which can then inform innovative responses to disinformation and harassment. Stronger privacy protections should strictly regulate state surveillance, safeguard encryption, and limit what data companies can collect and how they can use it. On the international stage, democratic governments should place human rights at the center of diplomatic work and engagement at multilateral bodies like the United Nations.

The future of the global internet depends on what we do now. Working in tandem, likeminded governments, the private sector, and civil society can strengthen resilience in the digital sphere and foster a more democratic future.

Explore Freedom on the Net 2022

Global internet freedom declined for the 12th consecutive year in 2022. Explore the latest edition of Freedom on the Net to learn how governments are on a campaign to divide the open internet into a patchwork of repressive enclaves.