Dismantling LGBT+ rights as a means of control in Russia

From anti-LGBT+ legislation to Chechen atrocities, the Kremlin uses state-sponsored homophobia as a part of its strategy to maintain power and influence at the expense of its own citizens fundamental rights. 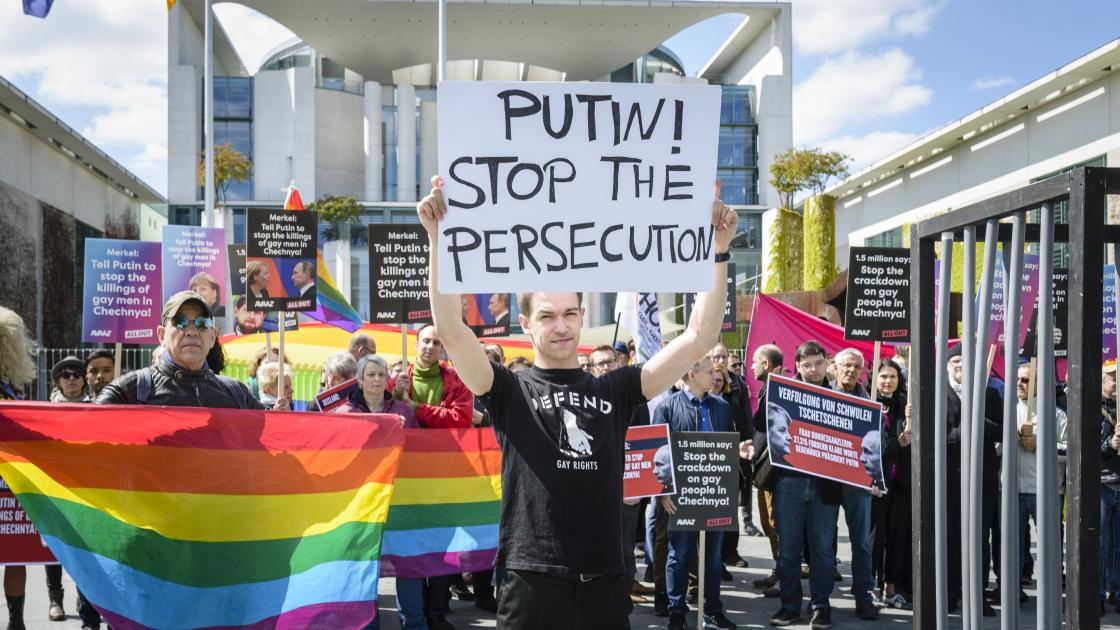 Russia’s ruling party’s most recent campaign to ban “polyamory and bisexuality propaganda” is part of an ongoing attempt to enact homophobic policies and preserve what the Kremlin considers “traditional values.” Along with the recent national referendum that included a constitutional ban on same-sex marriage, this campaign, increasingly conservative and expressly anti-LGBT+ rhetoric, represents state-sponsored “politicized homophobia” that undermine and repackage the principles of democracy and human rights, as well as how those concepts are interpreted by policymakers, in Russia and beyond.

Dimensions of the traditionalist agenda

Regulating gender and sexuality remains at the forefront of Russia’s domestic and international political agendas. The 2013 “gay propaganda” law marked a significant shift in using legislation to foster a sense of national identity at the expense of LGBT+ people’s fundamental rights. The Russian government’s “traditional values” seek to maintain a sense of “moral sovereignty” in the face of Western influence, or so they claim. In reality, politicized homophobia and the objectification of tradition not only aims to draw symbolic boundaries between “Russian culture” and the West, but also constructs an enemy—LGBT+ people. Through the infringement of the “enemy’s” rights, they hope to bolster national identity and religious sentiment.

By enacting legislation aimed at preserving "traditional values", including homophobic laws, the Russian government has repositioned itself as a significant ideological force in the region and around the world. Russian ideology resonates strongly in post-Soviet countries, where the formation, development, and specifics of national ideological structures remain sensitive and complex political processes. For instance, after Russia’s adoption of the gay-propaganda law in 2013, many post-Soviet countries’ parliaments considered different iterations of a bill against “homosexual propaganda.”

The government portraying itself as a leading defender of traditional values fits the Russian government’s international and domestic policy goals and political strategy. Cultural and intellectual manipulation through disinformation and propaganda is a primary weapon in the Kremlin’s arsenal, providing the political elite with a state ideology that justifies abandoning international norms, repelling Western criticism of current Russian policies, and maintaining power. Russia’s anti-LGBT+ policies are not manifestations of inherent Russian homophobia, but rather the development of a political strategy by Russian policymakers.

The implementation of the “gay propaganda” law has resulted in an increase in anti- LGBT+ violence and restrictions on LGBT+ projects and initiatives—from a ban on Pride events to the inability of LGBT+ organizations to register in the country. Further repression has occurred this year, including prosecutors’ demands to ban journalists from publishing articles discussing “nontraditional” sexual relations. Russian prosecutors have repeatedly filed lawsuits with Roskomnadzor, the federal executive body responsible for overseeing the media, demanding the blocking of local LGBT+ organizations’ websites.

Russian law enforcement officials have refused to investigate assaults and violence against LGBT+ individuals and activists, neglecting peoples’ fundamental right to safety enshrined in the Russian constitution. Recent instances include the Murmansk police’s refusal to investigate online death threats made against an LGBT+ activist, arguing that one of the activist’s social media post had deliberately sought to “provoke a negative assessment of persons of traditional views.” Officials have also declined to investigate a young bisexual woman’s claims that her family forced her to undergo violent “conversion therapy” in Chechnya. Furthermore, the Russian LGBT Network, a prominent LGBT+ rights organization, has reported that the Federal Security Service (FSB) has misused its power by actively seeking to identify “propaganda of nontraditional sexual relations” on the internet, even though this is not part of the FSB’s mandate.

The continuing state-sponsored atrocities and persecutions committed in Chechnya have gained international attention, but silence envelopes the government of Russia. Despite the Russian government’s inaction over the years, Novaya Gazeta journalists and the Russian LGBT Network revealed new evidence and testimonies of extrajudicial killings committed by Chechen security forces, reflecting the Chechen government’s impunity and flagrant disrespect for human rights, as well as the threats and dangers faced by LGBT+ people in the region.

Politicians, international nongovernmental organizations (NGOs), and international institutions have challenged the hostile environment for LGBT+ people in Russia and condemned the government’s repression of the LGBT+ population in numerous instances. In 2020, the European Court of Human Rights (ECHR) ruled that Russia violated LGBT+ activists’ right to freedom of assembly at a protest against the “propaganda” law. Similarly, the ECHR also ruled that Russia failed to ensure the peaceful conduct of a public meeting on Coming Out Day and that the arrests and detention of demonstrators were unlawful and discriminatory.

While domestic avenues to pursue justice for LGBT+ people are limited, forms of localized advocacy are countering the Kremlin’s anti-LGBT+ propaganda. Activists’ work and protests have brought these issues to the forefront of public discourse. NGOs have helped bring about the prosecution of extortionists who lured LGBT+ people into fake dates and members of the far-right Black Bloc movements who attacked participants of an LGBT+ conference. Overall, local organizations have demonstrated immense resilience in the face of growing repression.

Since the Russian government has actively repressed LGBT+ people and failed to comply with universal human-rights standards, advocates must seek justice on the international stage. International bodies and foreign governments have an opportunity to break the impunity of perpetrators of crimes against LGBT+ people. For example, the Sphere Foundation/Russian LGBT Network and the European Center for Constitutional and Human Rights (ECCHR) filed a lawsuit in Germany to investigate and issue arrest warrants for the violence against LGBT+ people in Chechnya on the principle of universal jurisdiction. The German courts should pursue the case filed against Chechen officials, demonstrate adherence to human rights norms and international law, and send a clear message to Russian officials that impunity is intolerable. The best path forward calls for international actors to adhere to human-rights principles, maintain political pressure on the Russian government, and support local actors who work to reduce homophobic rhetoric in the public domain and increase the representation of LGBT+ people.