Denying the problem’s existence will only help perpetuate it. 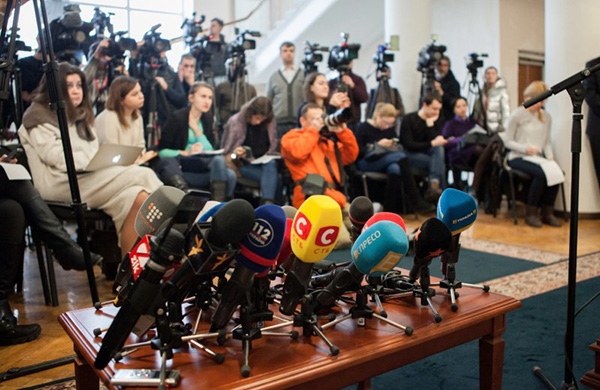 Denying the problem’s existence will only help perpetuate it.

In a Facebook post earlier this month, a Ukrainian member of parliament expressed doubt about the existence of media self-censorship, asking, “Which themes do Ukrainian journalists avoid because of pressure?” A journalist in the Cherkasy region replied, “You must live in a different country.”

The question arose after my critical comments at an event organized by the National Union of Journalists on the topic of “Threats to freedom of speech in Ukraine.” At the event, I shared Freedom House’s analysis of the impact of self-censorship and undue influence on media freedom in Ukraine, in particular that “economic and political pressure on journalists, editors, and media outlets, which influences their coverage and pushes them to avoid certain issues, is common.” This doesn’t mean that all journalists and media outlets practice self-censorship, but it is evident that such pressure has been a feature of the Ukrainian media space for a long time.

Nevertheless, in her skeptical post, the parliament member—who chairs a committee on freedom of speech and information policy—declared without further detail that Freedom House’s analysis and statements on the issue “appear political and voiced for the purpose of tarnishing Ukraine’s reputation abroad.”

Unlike government-mandated censorship, which also occurs in Ukraine, self-censorship is difficult to measure because it refers to the stories that journalists pitch but are shot down by editors for political or economic reasons, the investigations that are not pursued as vigorously as they should be, or the avoidance by journalists and editors of certain topics out of a sense of patriotic duty.

Self-censorship can be the result of direct pressure, such as a threat of violence or a demand to not report a specific issue, or indirect pressure, such as generalized statements by high-level officials that critical journalists are undermining the nation. But the outcome is the same: Important stories are left uncovered or underreported. In a country like Ukraine, which is in the midst of a dramatic political transformation and under attack by hostile foreign forces, a media sector that is heavily influenced by self-censorship cannot fulfill its critical functions: enabling public debate, holding officials accountable for abuses, reporting on matters of public interest, and ensuring citizens’ access to the government and its operations.

In response to the parliament member’s assertion, Ukrainian journalists quickly provided a number of concrete examples of how pressure to uphold certain political views, please political or economic interests, or avoid touchy subjects influences journalists and their reporting in Ukraine. For instance, at least some journalists and media experts consider it too controversial to report on the military’s operations in the eastern part of the country (particularly allegations of human rights violations by the Ukrainian armed forces in the conflict zone), corruption in the military sphere, the financial expenditures and business interests of President Petro Poroshenko (his unfulfilled promise to sell assets, scandals involving offshore entities, a vacation in the Maldives), and the activities of right-wing groups such as C14 and Narodni Druzhyny, among other topics.

The Institute of Mass Information (IMI), which publishes a Freedom of Speech Barometer, provides reliable numbers on the violence, political pressure, and other factors that directly or indirectly contribute to self-censorship. IMI also monitors surreptitious paid content, known colloquially as jeansa; according to IMI data, 52 percent of journalists report that their outlet publishes jeansa.

Freedom House’s Freedom of the Press report has long covered the topic of self-censorship and the undue influence of political and economic interests on news coverage. Since 2005, the report’s assessment of the impact of self-censorship has scarcely changed; the same can be said for its analysis on whether media outlets and journalists receive payments designed to influence their coverage. Freedom House’s findings are also consistent with other observers’ accounts, including those prepared by IREX, Reporters Without Borders, and the Committee to Protect Journalists. These studies generally rely on self-reporting by journalists, news outlets, and media experts in the country.

There is still reason to be optimistic. Indeed, there have been important improvements in some areas; for example, the concentration of media ownership and its impact on Ukrainian journalists, as well as the use of advertising dollars for the purpose of influencing coverage, have declined over the years.

Moreover, Ukrainian journalists are not alone in practicing self-censorship. According to a recent study by the Council of Europe, of the 940 European journalists surveyed, 63 percent reported unwarranted interference that affected their work, and “significant percentages reported toning down sensitive, critical stories, abandoning sensitive, critical stories, reporting content in a less controversial manner, being selective about what items to report, framing content as acceptable discussion, withholding information and shaping stories to suit a company’s/editor’s interests.”

Many of the taboo or controversial topics highlighted by journalists are covered in the Ukrainian media in one way or another, which is a testament to the diversity, bravery, and professionalism of Ukraine’s most dedicated journalists. However, in other cases with major political significance and human rights implications, such as with the recent clearing of the protest camp near the parliament building, journalists clearly hold back due to pressure and opt for superficial coverage rather than the deep dive that these weighty subjects demand. Some stories, such as credible allegations that the Security Service of Ukraine has operated secret prisons, also appear too toxic for full and widespread coverage in the media, damaging the Ukrainian public’s access to information about important developments in the country.

Unsubstantiated claims that reporting about problems in Ukraine, such as self-censorship, is purposefully aimed at “tarnishing Ukraine’s reputation abroad” could themselves be seen as a form of the political pressure that encourages journalists to self-censor. When commentators suggest that a journalist who reports critically on a given topic is tarnishing the country’s image, that creates an atmosphere in which journalists or even civil society activists may feel obliged to silence themselves out of a sense of patriotic duty.

The fact that journalists report feeling the need to self-censor—whether due to physical violence, political demands that they adhere to specially crafted talking points known as “temniki,” or economic pressure from editors and owners—is a major problem for freedom of expression in Ukraine that must be addressed in a sustained way. The discussion on Facebook that began after the National Union of Journalists event and continued in the media is a good start.

A version of this article was published in Ukrainian by Ukrayinska Pravda on March 19.