The spread of repressive policies has implications for U.S. security interests in the region. 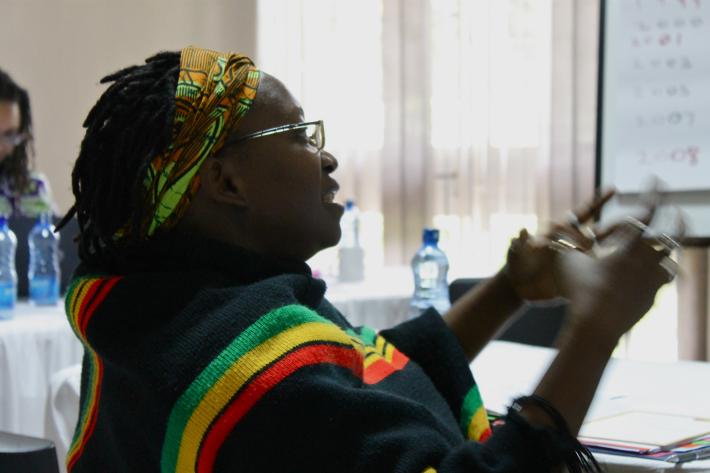 The spread of repressive policies has implications for U.S. security interests in the region.

As part of its expansionist foreign policy, China has been pursuing security and economic deals with governments across sub-Saharan Africa. Although Beijing claims that its intentions are altruistic, it is actually advancing a number of strategic goals. China hopes to extract raw materials, open new markets for its own goods and services, and build up economic and political leverage with local leaders by selling them on an authoritarian model of development.

The collaboration between Beijing and repressive regimes on the continent is especially striking in East Africa, where local governments are escalating their efforts to censor the internet and social media, often with technical support from China.

In 2013, China inked an $800 million telecommunications deal with Ethiopia’s state-owned internet provider that was expected to strengthen the government’s ability to censor the internet and crack down on free expression. In the years since, authorities have in fact persecuted online dissent. Between late 2016 and August of this year, for example, the Ethiopian regime used a state of emergency—declared in response to mass protests—to intermittently ban the most popular social media and messaging platforms, such as WhatsApp, Twitter, and Facebook. Access to foreign and independent media is restricted, and social media posts or private messages are used to convict activists on trumped-up terrorism charges.

It is no surprise that China remains silent on Ethiopia’s atrocious human rights record. But Ethiopia has shown its gratitude by helping to block United Nations resolutions that are critical of Beijing, and by supporting China’s repressive policies in Tibet. Furthermore, the warming ties come at a time when Ethiopia’s relations with the United States are under strain: The U.S. House of Representatives recently attempted to pass a resolution condemning human rights abuses in Ethiopia, but the measure was put on hold after Ethiopian diplomats reportedly threatened to halt cooperation on counterterrorism.

Freedom of expression is also under attack in Tanzania, where opposition lawmaker Tunda Lissu was arrested after calling President John Magufuli a “dictator” in July. The Tanzania Communications Regulatory Authority recently released a draft Electronics and Postal Communications Regulations Act that would heavily censor expression, for example by prohibiting “content that causes annoyance.” It could be used by the government to crack down on political opponents, and would also empower authorities to obstruct freedom of assembly. The draft law threatens internet providers with vague criminal penalties for failing to block and censor content in accordance with its provisions.

At a “new media roundtable” cosponsored by the government of Tanzania and the Cyberspace Administration of China, Deputy Minister for Communications Edwin Ngonyani discussed collaboration with China on social media censorship. “Our Chinese friends have managed to block such media in their country and replaced them with their homegrown sites that are safe, constructive and popular. We aren’t there yet, but while we are still using these platforms we should guard against their misuse,” he said. He added that his government “must find ways to make sure that while a person is free to say anything there are mechanisms to hold them accountable for what they say.”

The Chinese government recently offered technical support to the Ugandan government in its efforts to monitor and prevent “social media abuse.” The state-owned China National Electronics Import & Export Corporation agreed to build the capacity of Uganda’s Communications Commission, police force, and Ministry of Internal Affairs with respect to the fight against “cybercrime.”

Such assistance raises concerns given Uganda’s record on freedom of expression. Independent media organizations have increasingly been targeted and harassed by the police as Parliament debates the removal of the age limit for the presidency, which would allow longtime incumbent Yoweri Museveni to seek reelection in 2021. Last year, activist and academic Stella Nyanzi was arrested for a social media post in which she compared the president to “a pair of buttocks.” And in August, the government set up an “antipornography” committee to monitor and prosecute those who access or distribute sexual materials online. The language in the 2014 law behind the committee could be interpreted to allow the surveillance and harassment of the government’s critics or marginalized groups like the LGBT (lesbian, gay, bisexual, and transgender) community.

No time for a U.S. retreat

The promotion of China’s authoritarian internet policies in East Africa has implications for U.S. security interests. The United States relies on close cooperation with these governments in fields including refugee policy and counterterrorism, particularly in the context of the ongoing struggle against the Somalia-based militant group Al-Shabab. As seen with Ethiopia, such relationships could be at risk if the East African partners move closer to Beijing and its antidemocratic methods. Moreover, there is ample evidence to suggest that countries with a large youth population living under authoritarian conditions are more inclined to extremism.

To ensure genuine political stability and sustainable economic growth in the region, the United States should work to defend democratic standards and institutions, in part by supporting the efforts of local civil society watchdogs and human rights organizations to protect freedom of expression online. If the United States isn’t willing to engage and advocate for the universal values to which it subscribes, authoritarian governments will continue to fill the void.