In Eastern Europe and Beyond, a Dearth of Guidance on Regulating Disinformation

The region needs a detailed standard on how to tackle disinformation while upholding human rights. 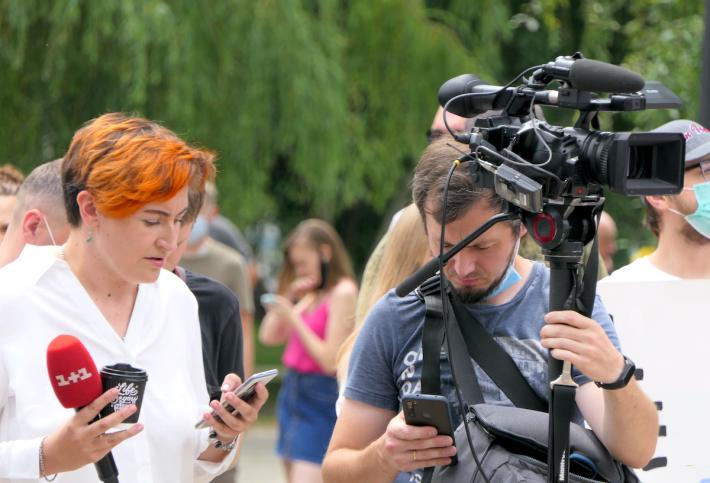 Ukrainian media personnel inside a crowd of protestors in the streets of Kyiv. Image credit: Oleksandr Polonskyi / Shutterstock.com

Since the emergence of the coronavirus pandemic in March, governments around the world have struggled to protect citizens from both the pathogen itself and its multifaceted impact on society. One of the core challenges facing governments is the “infodemic” of fake news and disinformation related to the crisis, which, according to the director general of the World Health Organization (WHO), “spreads faster and more easily than this virus, and is just as dangerous.”

Responses to the threat of COVID-related disinformation are especially problematic in the European Union’s Eastern Partnership (EaP) region, made up of six countries in Eastern Europe and the Southern Caucasus. During the pandemic, these countries have piloted an array of emergency measures that restrict the distribution of health-related “fake news,” often threatening citizens’ freedom of expression and access to information. However, these controversial measures are symptomatic of a wider problem: the critical lack of guidance from democratic partners on how to responsibly tackle the threat.

Lack of guidance from international institutions

Despite recognizing the danger posed by health-related disinformation, the WHO and other authoritative institutions have so far largely failed to provide guidance on best practices for governments, regarding either the legal definition of disinformation or what measures may legitimately be adopted to combat it. As a recent UN analysis points out, current WHO guidance for governments “is aimed at correction, not penalty,” and encourages proactive dispelling of rumors and transparency of state-sourced information.

While it is perhaps debatable whether a public health agency should spearhead global efforts to develop policy guidance on anti-disinformation efforts, even the European Union—typically a go-to source for policy-oriented best practices in the EaP region—has limited itself to a vague and largely corrective approach, advising governments to increase the availability of verified information and calling for platforms to self-regulate. Taken together, available guidance for governments is essentially silent on the important question of whether prohibiting false information can be legitimate, or what responsible regulation of information could look like.

Meanwhile, European Union member states including Romania and even France recently adopted measures that imposed serious controls and restrictions on the free flow of information in the context of the pandemic. These actions, criticized by opponents as censorship that undercuts media pluralism, have only spread more confusion as to what may be considered appropriate responses to health-related disinformation in a democratic society.

The vacuum of guidance from international partners and global health experts has led to a wide array of responses to disinformation across the EaP region. Governments are effectively taking matters into their own hands, pushing ahead with emergency provisions and policies despite the lack of clarity on whether they conflict with international obligations and human rights standards.

In Moldova, for example, a state of emergency allowed the government to plow forward with a particularly aggressive campaign against “fake news”—one that is ill-defined in scope and rife with dangerous legal ambiguities. In the early days of the crisis, government institutions blocked access to 52 allegedly “fake news” websites, issued a directive (ultimately recalled under intense civil society pressure) prohibiting journalists from sharing any pandemic-related information that diverged from official government statements, and raised new bureaucratic hurdles that significantly limited journalists’ ability to access information of public interest. Notably, the authorities made no attempt to publicly define what information may be considered “fake news” or what specific punitive measures can be used to combat it. In practice, this gave officials excessive discretion to restrict the public distribution of any information that they found questionable. The legal ambiguities have extended beyond the formal period of the state of emergency, which ended on May 15.

Other countries in the region have taken similarly worrying steps to restrict media coverage, with no clear timeline for lifting the controls. In Ukraine, where the fight against Russian disinformation has raged for years, the government chose to ramp up and repurpose existing controversial legislation to penalize the spread of rumors and disinformation in the new context of the health crisis. To this end, Ukrainian authorities have blocked thousands of websites in recent months, and brought charges against at least 150 individuals accused of spreading false information. Even in Georgia and Armenia, where efforts to curb health-related disinformation have been more measured, authorities continue to extend states of emergency and related provisions that allow the government to “establish control over the mass media” at its discretion. These powers leave open the possibility of additional restrictions as governments struggle with the ongoing health crisis and face rising public frustration.

International human rights law fills some of the gaps in guidance left by the WHO and European Union. Under Article 21 of the International Covenant on Civil and Political Rights (ICCPR), governments are permitted to restrict citizens’ rights in order to protect public health, but only if the restriction meets high standards of necessity and proportionality. The state must prove that any constraint is appropriate and narrowly tailored to achieve a legitimate protective function.

While this general guidance is a step in the right direction, it still leaves significant ambiguity on what specific actions would meet the ICCPR standards. A recent joint statement by the United Nations, the Inter-American Commission for Human Rights, and the Organization for Security and Co-operation in Europe (OSCE) asserts that the criminalization of disinformation is disproportionate and illegitimate in all cases due to its outsized negative effect on society; however, the standards for necessity and proportionality pertaining to less severe restrictive measures, such as information takedowns and censorship, are far less clear. Particularly in the context of very real threats to national security and stability during the pandemic, governments have a wide latitude to act while still seemingly adhering to the “necessity and proportionality” framework.

Nongovernmental organizations such as Global Partners Digital have called attention to this issue, warning that legitimate measures to limit disinformation under international law often still lead to curtailment of legitimate forms of expression. As a solution, these groups argue that democratic governments should supplement their national strategies with a human rights-based approach to combating disinformation, adding the explicit consideration of an anti-disinformation measure’s effects on human rights to the basic calculus of necessity and proportionality. By taking all three criteria into account, governments could begin to develop a framework that allows for responsible regulation and restriction of disinformation.

A call to joint action

The need for a responsible state-led response to health-related disinformation will only become more acute as the pandemic progresses. It is critical that democratic governments on both sides of the Atlantic step forward to help establish an actionable, coordinated framework for regulating disinformation that is consistent with international human rights law and includes explicit consideration of human rights impacts. Authoritative sources on international human rights law, including the Council of Europe, the United Nations, the OSCE, and the Inter-American Commission on Human Rights, should play a key part in this joint effort, working to build consensus among member states for responsible implementation. Finally, partners in the United States and the European Union must take a strong, principled approach in defining and calling out legitimate and illegitimate actions to combat the shared threat of disinformation, applying the same standard across the EaP region and in their home countries.