In Moldova, COVID-19 has exacerbated the challenges faced by women in the media. 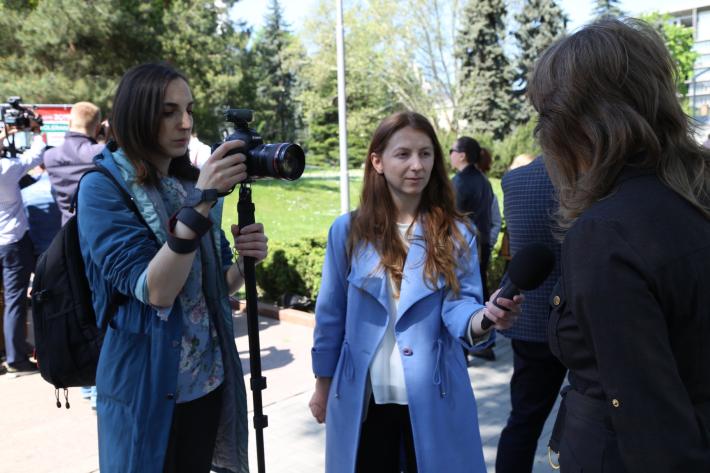 A free and independent press is an indispensable component of an open society. But to serve effectively and hold the powerful to account, journalists need much more than just the absence of repression. Among other things, they need physical safety, financial independence, opportunities for advancement, and respect from readers and potential sources. As more women break into journalism across the world, their societies must make sure that they enjoy the same security, opportunities, and respect as their male peers, so that the press can fulfill its role as a guarantor of freedom.

As the recent experience of Moldova’s media sector illustrates, the COVID-19 pandemic has made the challenges for women journalists even more glaring and complex.

Women make up nearly two-thirds of Moldova’s media workers, about double the world average. While this represents an achievement for female Moldovan journalists, it is not necessarily evidence of gender equality in the field. Experts cited in a Linnæus University regional survey covering Moldova, Russia, and Georgia argued that the influx of women into the profession is partly the result and partly a cause of a cycle of declining salaries and prestige for journalists, with men leaving even as women are drawn in.

The same study found that despite being in the majority, women journalists remain professionally disadvantaged. They are much more likely than their male peers to work as freelancers as opposed to contracted employees, much less likely to stay in the same organization throughout their career, and much less likely to want to continue to work in the media in the long run. Women hold only about 30 to 40 percent of the leadership and management positions in the media. Furthermore, nearly half of Moldovan journalists—men and women alike—reported being less likely to quote or interview women in their reports, in part because men “look more convincing” or because audiences continue to trust men more.

These challenges have been exacerbated by the COVID-19 pandemic, which has hit Moldova especially hard. As in other parts of the world, the health crisis has placed new and inequitable burdens on women. According to a survey by UN Women in Moldova, women took over a disproportionate amount of new childcare and household maintenance work during the pandemic, despite being nearly twice as likely as men to also be working from home. Unsurprisingly, women reported substantially higher levels of stress and worry.

Journalists proved no exception. In a limited survey of Moldovan journalists, several women journalists noted that childcare and a lack of space at home was getting in the way of their job, making it difficult to concentrate fully on work, conduct interviews online, or leave the house for any reason.

The experiences of Moldovan women journalists are not unique. An International Women’s Media Foundation report found that around the world, women in the media sector are far less likely than men to serve in management roles, are paid less, and are less likely to have regular employment. Policies to ensure pay equality, protection from sexual harassment, and maternity leave remain far from universal.

Similarly, the disproportionate impact of the coronavirus on women in the media sector is not limited to Moldova. A worldwide International Federation of Journalists survey found that most female journalists believe the coronavirus has exacerbated gender inequality in the profession, largely by increasing their responsibilities and blurring the lines between their private and personal lives.

The implications are disturbing. Many journalists already face governments that are reluctant to provide access to information, politicians who bar the press from events and threaten to sue outlets for critical articles, and in many cases, a market dominated by large, politically affiliated media groups that make it difficult for critical stories to reach a wide audience. In some settings, journalists also face the threat of physical violence or imprisonment for their reporting. Societies need journalists and media outlets at the very top of their game to overcome these challenges.

Moldova’s female journalists continue to answer the call. Investigative reporting by women at outlets like Ziarul de Gardă, Cu Sens, and the Center for Investigative Journalism of Moldova has contributed to good governance and improved people’s lives. For example, just in the past few months, a Ziarul de Gardă investigation sparked public outrage at an unjust application of quarantine restrictions against an elderly pensioner, setting in motion a series of events that ended in a Constitutional Court decision declaring such actions unconstitutional.

However, like female journalists around the world, these courageous individuals are working under an added burden that threatens to limit their ability to advance democracy and keep citizens informed.

No pillar of a free and open society can stand alone; human rights are indivisible and mutually reinforcing. As the share of women working in the media worldwide continues to rise, media organizations and press activist groups should prioritize advocating for more robust rules and better attitudes regarding gender equality, both within media outlets and among their audiences. The next generation of journalists, the organizations they make up, and the citizens who rely on them to keep authorities accountable will be the better for it.