As Elections Near, Germans Consider a Dangerous Alternative

The right-wing Alternative for Germany party has gained seats at the state level and is expected to enter the federal parliament for the first time this year. 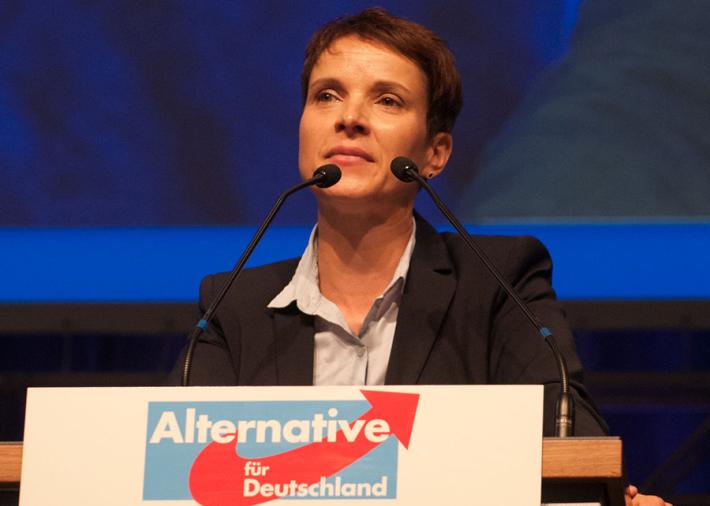 The right-wing Alternative for Germany party has gained seats at the state level and is expected to enter the federal parliament for the first time this year.

Germany is preparing for federal elections in September 2017, and the right-wing populist Alternative for Germany (AfD) party stands to gain from the balloting. It does not currently have any members in the parliament, but to many Germans’ surprise, it has steadily won seats in state legislatures in recent years, reflecting an erosion of public support for Chancellor Angela Merkel’s policies.

The AfD first formed in 2013 as a Euroskeptic conservative party that was opposed to bailouts for Greece and other heavily indebted members of the euro currency union. It argued that the financial irresponsibility of many Southern European states was putting Germany’s own finances and economy at risk. The party failed to reach the 5 percent vote threshold needed to enter the Bundestag that year, but it secured a handful of seats in the European Parliament in early 2014.

A turn to the populist right

Germany’s absorption of hundreds of thousands of migrants and refugees between 2014 and 2016 has reshaped the party’s platform and the way it is perceived in German society. To complement its stance against the European Union, the AfD now spews anti-immigration rhetoric and capitalizes on fear to gain support. In an interview early last year, party leader Frauke Petry declared that “border guards must prevent illegal border crossings and even use firearms if necessary.”

That statement, as well as a meeting between the AfD and Austria’s far-right Freedom Party, caused outrage in the European Conservatives and Reformists (ECR), the third-largest party grouping in the European Parliament, to which the AfD belonged. The group found Petry’s remarks “inhumane” and the meeting with the Freedom Party “shocking,” and asked for the two remaining AfD members of the European Parliament to withdraw from the ECR or face possible expulsion. In response, one of the two, Beatrix von Storch, accused Merkel of seeking to damage the party’s reputation and its chances in upcoming regional elections. Both AfD members have since resigned from the ECR.

The AfD’s official website notes that its priorities are protecting families and children, combating the spread of Islam, and preserving security and identity. Many of the party’s public statements denounce refugee children attending German schools, criticize Merkel for lack of action against Islamic extremism, and disparage the government for not providing adequate compensation to the families of those killed in a December 2016 terrorist attack in Berlin.

The party is also following the lead of other populist figures, including U.S. president Donald Trump, in their suspicion of the media, intolerance of criticism, and friendliness toward Russia. Petry has referred to the media as the “Lügenpresse,” or “lying press,” a term that was popularized by the Nazi regime as part of its effort to discredit independent journalism.

The AfD has a long history of discourse with both Russian officials and other right-wing parties that are connected with Russia. While attending a Russian-sponsored conference in occupied Crimea, Marcus Pretzell—leader of the AfD in the western state of North Rhine–Westphalia and the second AfD member in the European Parliament—advocated stronger economic ties with Russia and the lifting of sanctions related to the Kremlin’s invasion of Ukraine. Such statements have added to concerns that an AfD presence in the Bundestag could weaken Germany’s position as one of Russian leader Vladimir Putin’s strongest critics and a bulwark of European solidarity in the face of Russian pressure.

Germany’s history of fascism has inhibited many voters from supporting the AfD, but recent terrorist attacks and the difficulty of integrating refugees have helped far-right views gain broader acceptance. Some Germans have even responded to the influx of refugees with acts of violence. Federal police reported that there were at least 797 attacks on refugee homes or compounds in 2016, many of which were carried out by “right-wing motivated offenders including neo-Nazis.”

The security and integration concerns have propelled the AfD into many state parliaments. The party won 21 percent of the vote in the state of Mecklenburg–West Pomerania last September. It also won 14 percent of the vote in Berlin, granting the party its first-ever seat in the Berlin legislature. And the AfD became the second-largest party in Saxony-Anhalt, taking more than 24 percent of the vote. In the September 2017 state elections, the party is expected to gain its first seats in the northern state of Schleswig-Holstein and in North Rhine–Westphalia.

Although the party’s main support comes from eastern Germany, a less economically developed area that features greater public hostility toward foreigners, the AfD has members in 10 of Germany’s 16 state parliaments. Moreover, as the AfD’s numbers have risen, those of Merkel’s Christian Democratic Union (CDU) have fallen.

In Merkel’s home state of Mecklenburg–West Pomerania, the CDU received only 19 percent of the vote last year, its worst result thus far. The CDU won just 17.6 percent of the vote in Berlin, and although it took the largest share of votes in Saxony-Anhalt with 29.8 percent, it still lost seats in the state parliament, triggering the breakup of its state-level coalition with the Social Democrats (SPD). Merkel’s own approval ratings dipped to 45 percent in September 2016, an unusually low number for the longtime chancellor, though the figure has slowly begun to rise again.

The AfD has recently slipped in opinion polls after placing third behind the CDU and SPD. The Social Democrats appear to be rallying around their candidate for chancellor, Martin Schulz, and drawing in some former AfD supporters. The performance of Donald Trump in the United States has also reportedly turned a number of voters away from the AfD. Nevertheless, the party is still polling at about 8 percent, more than enough to enter the Bundestag.

Although it is unlikely to play a significant role in the selection of a chancellor, the rise of the AfD reveals alarming changes in the attitudes of Germans, who since World War II have not supported a party with such extreme views and rhetoric. Even if it does not gain tangible power, the party is already influencing political discourse in ways that could alter the character of German democracy and affect the wider world. Germany has the largest economy in Europe, is the central pillar of the European Union, and has come to play an important role in international affairs with its economic might and steady use of diplomacy.

Now is not the time for fear to engulf reason, or for politicians to cynically employ populist rhetoric. As many European countries give in to their anxieties and support figures like Nigel Farage and Marine Le Pen, Germany needs to apply the lessons of its past to create a stable future, grounded in the proven benefits of democracy, human rights, and the European Union.

Ali Cain is a former research intern for Freedom House. She is studying and working in Hamburg, Germany, as part of the Congress-Bundestag Youth Exchange for Young Professionals.