Yemen’s civil war, which is partly a proxy conflict between Saudi Arabia and Iran, has claimed more than 10,000 lives and caused a humanitarian crisis. Ending the fighting must be a priority for the United States and the international community in 2017. 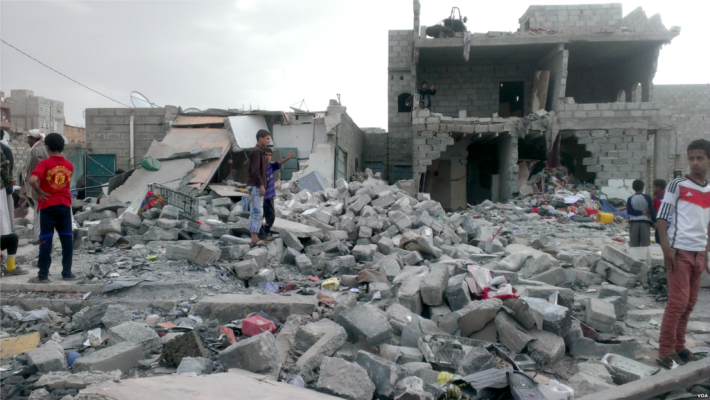 Months after an airstrike on a neighborhood populated by black Yemenis, or "Muhamasheen," more than a hundred buildings still remain in rubble and survivors continue to search for any valuables, Sana'a, Yemen, Oct. 9, 2015. Credit: Wikimedia Commons.

Yemen’s civil war, which is partly a proxy conflict between Saudi Arabia and Iran, has claimed more than 10,000 lives and caused a humanitarian crisis. Ending the fighting must be a priority for the United States and the international community in 2017.

The war and humanitarian crisis in Yemen—with its rampant human rights violations, multiple militant and terrorist factions, foreign interventions, widespread famine, and unchecked disease—bears an increasing resemblance to Syria. However, Yemen has received far less attention from the international community.

The U.S. government and other international actors urgently need to focus their efforts on (1) halting logistical support and weapons sales to warring parties, (2) working to reach an inclusive political settlement, (3) pushing for an international inquiry into human rights violations, and (4) supporting local efforts to document such violations.

Turmoil in Iraq and Syria, an increase in terrorist attacks in Europe, and the divisive U.S. election were just a few of the stories that stole the spotlight from the failed state in Yemen during 2016. While the media themselves have dubbed Yemen’s crisis “the forgotten war,” few observers seem to truly understand the dangers associated with ignoring the conflict.

The civil war began in late 2014, pitting a northern rebel group known as the Houthis—allied with forces loyal to former president Ali Abdullah Saleh—against the government of President Abd Rabbuh Mansur Hadi. The rift was rooted in decades of economic underdevelopment (Yemen is the region’s poorest country), corruption, authoritarian misrule, and political marginalization, but it has also taken on sectarian dimensions.

Yemeni citizens had grown tired of President Hadi’s inability to properly manage the country in the wake of Arab Spring protests that forced Saleh’s resignation. Sensing their discontent, and carrying the banner of democracy, the Houthis launched a stunning offensive that led to the successful takeover of the capital, Sana’a, in September 2014. Hadi eventually fled to neighboring Saudi Arabia. His ouster led to a counteroffensive backed by the Saudis and their regional allies, including a fierce bombing campaign starting in early 2015, aimed at restoring the Hadi government.

Amid the chaos, the local branches of Al-Qaeda and the Islamic State (IS) militant group have expanded their influence and in some cases seized territory in southern and eastern Yemen. Just last month, a suicide bomber killed at least 40 Yemeni soldiers in the southern port city of Aden.

A major factor behind Saudi Arabia’s involvement is the role of its regional rival, Iran, which has been smuggling weapons to the Houthis. Earlier this week, an Australian naval patrol seized a huge supply of light arms, including nearly 2,000 assault rifles and 81 grenade launchers, found aboard an Iranian dhow off the coast of Yemen. Observers have noted the sectarian link between Shiite-led Iran and the Houthis, whose Zaydi faith is technically a branch of Shia Islam. However, there are major theological differences between the two, and Iran’s main interest in Yemen is political rather than ideological. It has worked to establish armed clients and proxies across the region as part of a broader effort to project power and influence beyond its borders.

The conflict in Yemen has been catastrophic for human rights. The Saudi-led bombing campaign made international headlines multiple times during 2016, for instance when a hospital run by Doctors Without Borders was bombed in August, and when an air strike on a funeral in October killed 140 civilians.

The Saudis have admitted to using cluster munitions, which randomly scatter bomblets over a wide area and pose an enormous threat to civilians. Many of the bomblets fail to explode on impact and effectively act as landmines. Though these inherently indiscriminate weapons have been banned in 100 countries by international treaty, the United States, Britain, and Brazil have supplied them to Saudi forces throughout the conflict.

The Saudi-Hadi alliance is also implicated in large-scale damage to property and civilian infrastructure. Houthi-Saleh forces have engaged in apparent human rights violations of their own, including indiscriminate shelling of populated areas, extrajudicial killings, arbitrary detention, and enforced disappearances.

Freedom House collected documentation of human rights violations in 15 Yemeni governorates. Airstrike casualties, arbitrary detention, and enforced disappearances were most commonly reported in and around Sana’a, which is under the control of the Houthi-Saleh alliance. Extrajudicial killings and physical assault or harm were most frequently reported in the southern areas under Hadi control, like Aden, Lahij, and Abyan, as well as the highly contested areas of Taiz and Al-Bayda. Destruction of property and extrajudicial killing were reported near Aden, where Al-Qaeda and IS have a presence. 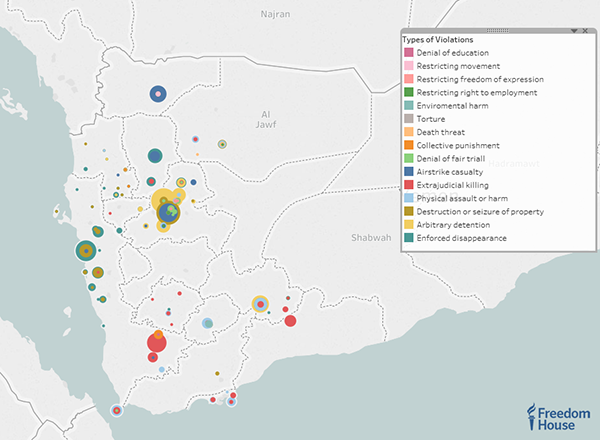 Freedom House, Human Rights Watch, Amnesty International, and other human rights organizations have called on the U.S. government to take concrete measures to bring an end to the conflict. Despite the full-blown humanitarian crisis, efforts to date have been feeble. In fact, the U.S. government has supported the Saudi-led campaign since March 2015 with logistical aid, including mid-air refueling for warplanes, intelligence sharing, and targeting assistance. Washington has also offered the Saudis $115 billion in weapons sales since President Barack Obama took office in 2009, more than during any other U.S. administration.

Britain has sold more than $3 billion in weapons to Saudi Arabia since March 2015, and blocked a critical effort led by the Netherlands last year to establish an official UN inquiry into human rights violations in Yemen. The inquiry, which would have begun in March 2017, was replaced by a weak, partisan national inquiry that reports to President Hadi. Britain also helped Saudi Arabia secure a position on the UN Human Rights Council through backdoor deals. In October 2016, Saudi Arabia was reelected to the council for a three-year term, receiving support from 79 percent of member states. Although members are elected via secret ballot, neither the United States nor Britain voiced opposition to reelecting the Saudis.

In December, pressure from human rights organizations led the Obama administration to reduce U.S. military support to Saudi Arabia. But this minor step is simply not enough. Experts agree that without U.S. and British support, the Saudi-led campaign in Yemen would quickly grind to a halt.

The most recent attempt to reach a political settlement unsurprisingly ended in Kuwait last summer after the Hadi government obstinately refused to enter into negotiations with the Houthis unless they disarm and withdraw from territory they have held since 2015. This absurd stipulation should have been considered a nonstarter by mediators.

“The Yemen conflict is still solvable and must end now,” said Farea al-Muslimi, nonresident scholar at the Carnegie Middle East Center, in a recent conversation with Freedom House. “But since there isn’t a refugee crisis in Yemen, the Western media and policymakers aren’t paying attention. As a result, we’re slowly beginning to see a new Syria emerge in the Arabian Peninsula.”

In the meantime, there is a critical need to increase support for local civil society organizations to document the country’s grossly underreported human rights violations and prepare for a future transitional justice process. If we continue to ignore the true scale and causes of this conflict, our neglect will only magnify the threats it generates and raise the costs of a resolution.