Amid discontent, sometimes violent protests, and a drought of historic proportions, the Ethiopian government is tightening its stranglehold on domestic politics. 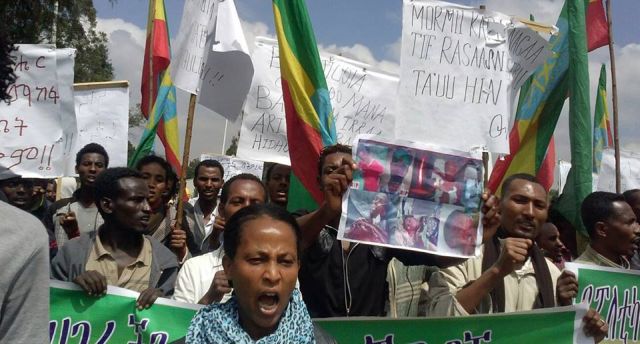 Amid discontent, sometimes violent protests, and a drought of historic proportions that has left more than 15 million Ethiopians in need of urgent food aid, the Ethiopian government is tightening its stranglehold on domestic politics.

In the wake of the large-scale protests that rocked the Oromia region from November to March, the government, led by the Ethiopian Peoples’ Revolutionary Democratic Front (EPRDF), has taken a number of measures aimed at stifling dissent. While consistent with EPRDF’s authoritarian posture, these steps are a devastating blow to the country’s independent media and civil society.

Protests in Oromia and growing ethnic tensions in the Amhara and South regions are viewed as indications that EPRDF’s model of governing through complete control over all levels of political and economic life could soon reach its breaking point. The government’s intolerance of alternative political views is pushing the country’s diverse ethnic and political communities to take to the streets to air their grievances.

While the initial trigger for the protests in Oromia was opposition to an unpopular government development plan, the scale and persistence of the protests in the country’s largest and most populous region point to a deeper ethnic discontent after years of misrule. These developments are even more worrisome as deadly protests began to emerge in several parts of the country less than six months after EPRDF and its allies claimed to have won all 547 parliamentary seats in the latest general elections in May 2015.

Ethiopia’s perceived stability and its much-touted role in the global fight against terrorism in the Horn of Africa are at stake if EPRDF continues to ignore the dangers of suppressing citizens’ legitimate demands for inclusive and accountable governance. Any economic progress can only be sustained with a genuine commitment to political reform that adequately responds to the demands of Ethiopia’s diverse political, ethnic, and religious groups for participation at all levels of public life.

The protests brought a violent response from authorities. In addition to extrajudicial killings of hundreds of protesters in the Oromia and Amhara regions, security forces arrested thousands of students, social media activists, and opposition party leaders and supporters. As protests continue in some parts of Oromia, authorities have filed criminal charges against dozens of Oromo students and political activists under the country’s Anti-Terrorism Proclamation (ATP). Hundreds more remain in custody without charges.

In response to the role social media played in publicizing human rights violations perpetrated during the protests in Oromia, Ethiopia’s parliament rushed through a cybercrimes law in June. The law stipulates serious penalties for a wide range of online activities and gives authorities greater surveillance and censorship powers that will limit access to information on digital platforms. The adoption of this law followed a shutdown of Facebook, Viber, and WhatsApp in parts of the Oromia region. Authorities also cited social media posts as evidence in criminal charges brought against digital activists. These social media posts were images, videos, and audio recordings made during the protests that documented numerous incidents of heavy-handed response to peaceful demonstrators.

Last week the government publicly stated for the first time that it is blocking these social media applications nationwide, claiming that they are a distraction to students taking university entrance exams.

In June, the Charities and Societies Agency, the government body that regulates nongovernmental organizations (NGOs), announced that it had shut down more than 200 NGOs in the last nine months. The agency cited failure to comply with numerous requirements of the Charities and Societies Proclamation (CSP) and lack of funding as reasons for the closures. The announcement followed the agency issuing a directive that seeks to impose penalties for noncompliance with the CSP. By issuing this directive, the agency effectively gave itself quasi-judicial powers in criminal proceedings.

Although it is not clear what triggered this latest directive, the move exacerbates the harsh conditions under which civil society organizations are operating. By paving the way for increased imposition of penalties, the Charities and Societies Agency will further undermine civil society’s ability to operate independently. Furthermore, these measures suggest a reversal of the willingness that the government had shown in the past few years to engage in a dialogue aimed at revising some of the directives previously issued by the agency.

While the government continues to take measures that undermine civil society, popular support for civil society remains strong. According to a recent online survey conducted by Freedom House, two-thirds of those polled believe that civil society organizations should engage in human rights and democracy promotion. The survey also found that Ethiopians are unaware of the significant challenges facing civil society and of the crippling effects of the CSP. The survey findings underscore how a blackout of information from independent sources and constrained civic space curtail citizens’ ability to organize and participate in matters that affect their daily lives.

Years of government attacks, relentless smear campaigns, and extremely cumbersome rules and regulatory frameworks have crippled Ethiopia’s civil society. NGOs are denied access to resources and the ability to network with each other and mobilize support. As demand for democratic reforms in Ethiopia gains momentum, a vibrant civil society will be essential. It is therefore critical that, despite the challenges they are facing, NGOs move beyond mere survival and focus on making themselves more accessible, relevant, and accountable to the public, and that their allies at home and abroad support these efforts to build strong constituencies and press ahead for a democratic opening in Ethiopia.