In Ethiopia, a Cautionary Tale for Tanzanian Democracy Activists

Conditions are deteriorating in Tanzania, but Ethiopia shows that this may only be the beginning. 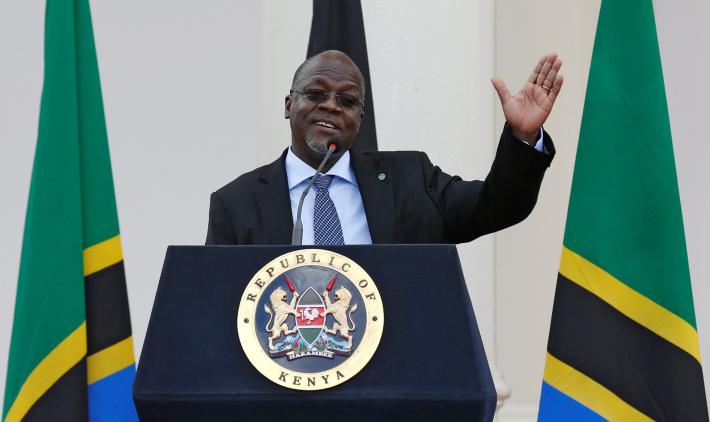 Conditions are deteriorating in Tanzania, but Ethiopia shows that this may only be the beginning.

Until recently, Tanzania was perhaps East Africa’s most stable, peaceful nation. When President John Magufuli was elected in 2015 on promises that he would root out corruption, Tanzanians, other Africans, and the international community alike looked forward to the possibility of positive steps toward accountability and democratic governance.

Now, Magufuli—known as “The Bulldozer” for his no-nonsense approach in his previous position as minister of works, transport, and communication—touts his anticorruption and economic development agenda even as he presides over a government responsible for arrests of opposition politicians, abductions of activists and journalists, and rising levels of media censorship.

The truth is that Tanzania’s democracy has never been as strong as it may have appeared to outside observers, but its trajectory since 2015 shows unmistakable parallels to that of Ethiopia since 2005, which should serve as a cautionary tale.

An examination of the Ethiopian example suggests that recent arrests, abductions, and censorship in Tanzania are not isolated incidents, but form part of a broader trend in which Magufuli may be testing the waters before instituting more systematic repression. The methods used are mutually reinforcing, building upon one another until all aspects of public life are brought under control. Magufuli is no doubt gauging reactions from citizens and the international community; so far, those reactions have been muted.

The turning points for Ethiopia and Tanzania, respectively, were in 2005 and 2015.

In the 2005 Ethiopian elections, the ruling Ethiopian People’s Revolutionary Democratic Front (EPRDF) allowed for somewhat more open political competition and media coverage, but when it became clear that voters supported two opposition parties in large numbers, the reaction was swift and severe. The ruling party declared itself the winner before vote counting was completed and jailed opposition leaders who protested. The draconian and restrictive measures that followed were part of a clear effort to ensure that the opposition could never again pose a threat at the ballot box.

Prior to Tanzania’s 2015 elections, the ruling Chama cha Mapinduzi (CCM) allowed for relatively free media coverage, open campaigning by the united opposition coalition, and political debates. The elections were the most competitive in the country’s history, with high voter turnout (67 percent) and the opposition presidential candidate securing 39 percent of the vote. The CCM responded by engineering the immediate nullification of election results in Zanzibar and rapidly escalating efforts to restrict political participation and dissent.

Authorities in Ethiopia and Tanzania use similar methods to advance their agenda:

Through a combination of restrictive legislation, threats, and bans, Tanzanian officials have severely limited opportunities for citizens to obtain independent information or express their dissatisfaction. Immediately before the 2015 elections, the parliament enacted the Cybercimes Act, which criminalized a range of online activities. People have since been arrested under the act for offenses such as “insulting” the president in WhatsApp messages or Facebook posts, failing to reveal the identities of anonymous users, and publishing “inaccurate and unverified data” on social media.

The 2016 Media Services Act is a complementary tool for repressing dissent, as it gives the information minister broad powers to deregister media houses. In just the last year, the Tanzanian government has used the law to ban the publication of four newspapers. Recently introduced online regulations require bloggers to pay $480 for a three-year license and a $440 annual fee, and to report the anticipated content of their blogs.

Older laws have also been enforced more aggressively in Tanzania. In January 2018, five television stations were found guilty and fined for contravening the 2005 Broadcasting Services (Content) Regulations. They had aired a press conference by a local human rights organization on abuses during a recent by-election—the coverage was deemed “seditious” news that could endanger peace and national security. Although the regulations do not contain a provision on sedition, none of the penalized stations appealed, likely to avoid further provoking the Tanzania Communications Regulatory Authority.

Unsurprisingly, the crackdown has had a chilling effect on independent news sources. Widespread self-censorship is apparent in the conspicuous lack of local coverage of scores of bodies washing up on the beaches of Dar es Salaam, the reported disappearance of over a thousand children in the Kibiti area, and the extrajudicial killings of young men by watu wasiojulikana (“unknown persons”). The disappearance of a journalist in November 2017 gave the media another reason to avoid reporting on sensitive topics.

Similarly, in Ethiopia, the government arrested over a dozen journalists and publishers and charged them with treason following the 2005 elections. The EPRDF enacted legislation imposing draconian restrictions on print and broadcast media in 2008, and on internet communications in 2012. The government has effectively used antiterrorism legislation to jail the few bloggers and other government critics who turned to the internet and social media as an alternative platform for dissent, and regularly shuts down access to major social media services.

To ensure their dominance over all aspects of public life, authoritarian governments work to discredit independent institutions. In Tanzania, the administration and its allies have targeted nongovernmental organizations (NGOs), churches, opposition parties, and constitutionally independent state bodies such as the Commission for Human Rights and Good Governance (CHRAGG), the parliament, and the judiciary.

In Ethiopia, the EPRDF conducts sustained smear campaigns against NGOs by labeling them as “rent seekers” and “agents of the West.” This process is not yet as pronounced in Tanzania, but there are emerging trends. In June 2017, the home affairs minister threatened to deregister any NGOs advocating for the rights of pregnant girls to return to school and promised to deport foreigners who advocated on this issue or on the rights of LGBTI people.

Tanzania’s CHRAGG has tried to assert its authority in some situations, but executive agencies have undermined its already limited budgetary independence and enforcement powers. In September 2017, it ordered a halt to evictions in Loliondo, but the order was ignored. Ethiopia’s constitution and relevant legislation also envisage an independent human rights body, but in reality the Ethiopian Human Rights Commission is crippled by political influence, including through the appointment of party loyalists as commissioners and the curtailment of its power to conduct independent investigations and publish reports.

In Ethiopia’s 2015 elections, the EPRDF and its allies won all 547 seats in the federal parliament, making the country a de facto single-party state and further diminishing the legislature’s oversight role. In Tanzania, the CCM reportedly uses bribes and other incentives to convince elected opposition members to renounce their affiliations and join the ruling party. Lawmakers have been banned from holding political assemblies outside their constituencies since June 2016, and live broadcasts of parliament sessions ceased in May 2016.

Finally, in Ethiopia the courts routinely convict government opponents of serious crimes, such as terrorism, based on flimsy evidence and deeply flawed trials. On the rare occasions when judges summon prison officials to explain alleged abuses against prisoners, the officials either fail to appear or casually ignore orders to rectify the violations. Tanzania’s judicial system has structural flaws that allow for undue political influence on rulings, but it retains a degree of independence. Therefore, democracy advocates still have an opportunity to encourage judges to exert their authority and protect individual rights.

In addition to limiting channels of expression and weakening independent institutions, governments seeking to consolidate power often refuse to allow any form of criticism.

In Ethiopia, through the use of draconian legislation including the Charities and Societies Proclamation, the Antiterrorism Proclamation, and the Freedom of the Mass Media and Access to Information Proclamation, the government has mounted a coordinated assault on civil society, independent media, and opposition political leaders. Over the years it has engaged in mass arrests of protesters, journalists, and bloggers and the indiscriminate killing of unarmed demonstrators.

In Tanzania, efforts to silence opposition politicians have featured arrests of high-ranking party members or elected officials, the attempted assassination of opposition leader Tundu Lissu in broad daylight, and disappearances and killings of other opposition figures. There has been no independent investigation into this extrajudicial violence, and the government has shown no tolerance for critics who accuse it of complicity. Parliament member Joseph Mbiliyini (popularly known as Sugu) and local party leader Emmanuel Masonga were sentenced to five months in jail for “insulting” Magufuli after they suggested that the government had a role in the attempted assassination of Lissu. In his chilling ruling, the magistrate said, “It is dangerous if a citizen will not honour or show respect to the President.”

There is no reason to believe that attacks on government critics will stop at organized political parties. In response to calls on social media to hold nationwide protests on April 26, 2018, Magufuli said, “Let them demonstrate and they will see who I am.” After preemptively arresting a driver and a farmer who “were inciting others to protest on April 26, saying on social media that there is no freedom, that there is a dictatorship, which is totally false,” the police said, “We have already warned that [we] will not accept people testing government. We have arrested these two, let it serve as a lesson to others.” The irony of arresting the pair—and at least 15 others—for claiming that there is no freedom was apparently lost on the police.

Tanzania already has an extremely centralized state and a ruling party that has governed without interruption since independence. If the few remaining safeguards against impunity are removed, there will be nothing to prevent the government from emulating the EPRDF’s more severe forms of oppression, including mass arrests and the use of live ammunition against protesters.

The warning signs that Tanzania is indeed moving in such a direction will be the introduction of harsher NGO legislation that seeks to isolate the groups from their constituencies or label them as foreign interests, and the introduction of even broader antiterrorism legislation to target political dissidents outside of the NGO sector. But laws alone will not eliminate Tanzania’s voices of dissent. The government may seek to co-opt independent institutions, use administrative procedures to harass its critics, and attempt to divide civil society against itself.

Ethiopia is much further down the authoritarian road than Tanzania. But the similarities can be instructive for democracy advocates seeking to slow or reverse Tanzania’s march toward authoritarianism. For now, these advocates still have some space and opportunity.

Tanzanian activists should recognize that the current acts of repression are no longer isolated incidents, and move to push back collectively and strategically. To foil government attempts to divide them and cut them off from those they serve, democracy advocates will have to invest in building grassroots support, identify aspects of government policies that acknowledge the role of civil society and use those as entry points to engage the government, and form alliances with likeminded domestic and international actors to coordinate advocacy efforts.

The human rights organizations leading this fight may be increasingly targeted by the government, and cannot protect Tanzania’s civic and political space on their own. Organizations working on “safer” issues like health, economic development, agriculture, or education should stand shoulder to shoulder with the more vulnerable groups focused on civil liberties and democracy, because a government that uses every tool at its disposal to control public life will eventually come for them as well.