Even When Coups Fail, the Effects Often Linger for Years

Democratic conditions usually remain worse long after the troops have returned to their barracks. 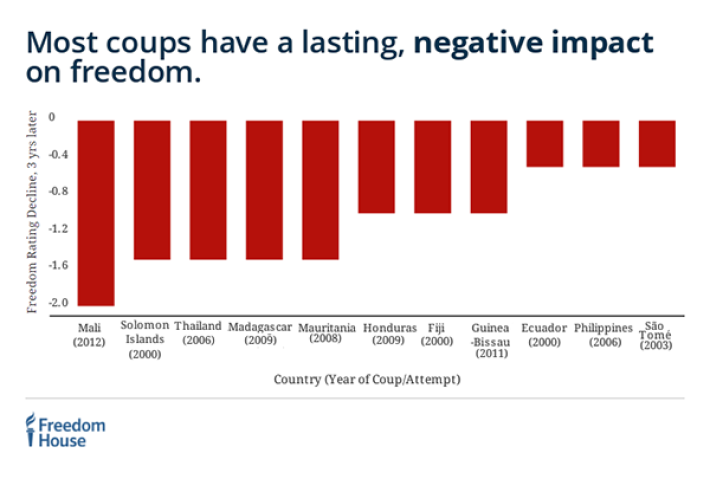 Democratic conditions usually remain worse long after the troops have returned to their barracks, according to Freedom House data.

When elements of the Turkish military attempted to overthrow the government of President Recep Tayyip Erdoǧan in a coup last month, they announced to the media, “Turkish armed forces, in order to reestablish constitutional order, democracy, rights and freedoms, rule of law, safety and security of the Turkish nation and the state, has taken over all governmental responsibilities of the Republic of Turkey.”

But Freedom House data show that most coups, both successful and failed, have a persistent, detrimental impact on the very things the Turkish coup plotters claimed to be protecting.

Eleven out of 20 countries that suffered a coup or coup attempt between 2000 and 2013 had significantly worse scores in Freedom House’s Freedom in the World report three years after the event, compared with precoup conditions. Another four countries showed no lasting change in their overall “freedom rating”—the report’s most general measurement of political rights and civil liberties, on a scale of 1 to 7. Just five managed improvements after three years.

Virtually all coups cause a country’s political rights rating to drop for the year in which they occur, since such actions are by definition disruptive of the normal political process, entailing the suspension of constitutional order or the dissolution of elected bodies. However, civil liberties also frequently suffer a decline, as the military or those who successfully fend off a coup attempt seek to consolidate control through media censorship, curfews, and emergency powers of arrest and detention.

Even if civilian leadership is restored quickly, such measures can do long-term damage to freedom of expression and the rule of law, particularly if they become codified in new constitutions or permanent laws.

The worst-affected countries were primarily in Africa, which also accounted for 11 of the 20 coups examined. Mali, a beacon of relative stability before its 2012 rebellion and coup, suffered the most dramatic score decline, with its freedom rating for 2015 remaining two full points below the precoup level. Other African countries with serious declines were Mauritania, Guinea-Bissau, and Madagascar. Non-African countries that suffered declines include Thailand, Honduras, Ecuador, the Philippines, the Solomon Islands, and Fiji.

In a handful of countries that already scored very poorly, including Egypt and the Democratic Republic of Congo, coup events did not leave the freedom rating any worse three years later. Venezuela actually seemed to emerge stronger after defeating a coup attempt in 2002, and its civil liberties rating improved. However, political rights later declined, leaving its overall freedom rating unchanged as of 2005.

Notably, a quarter of the countries assessed have suffered multiple coup events in the past 15 years, including Thailand, Egypt, Fiji, Mauritania, and Guinea-Bissau, indicating that the damage done by an initial coup can leave a system weakened and vulnerable to further disruptions. Indeed, some of these countries have histories of coups stretching back well into the 20th century.

Before last month’s coup attempt, Turkey seemed to have escaped from its own legacy of military interventions. While the civilian government fended off the latest blow, the global data only reinforce growing indications that Turkish democracy will remain in danger—whether from coup plotters or from alarmed incumbents—for years to come.