Familiar Flaws, and Signs of Progress, in Ukraine’s Local Elections

Sunday’s balloting was marred by some serious problems, but also featured genuine competition and efforts to prevent fraud. 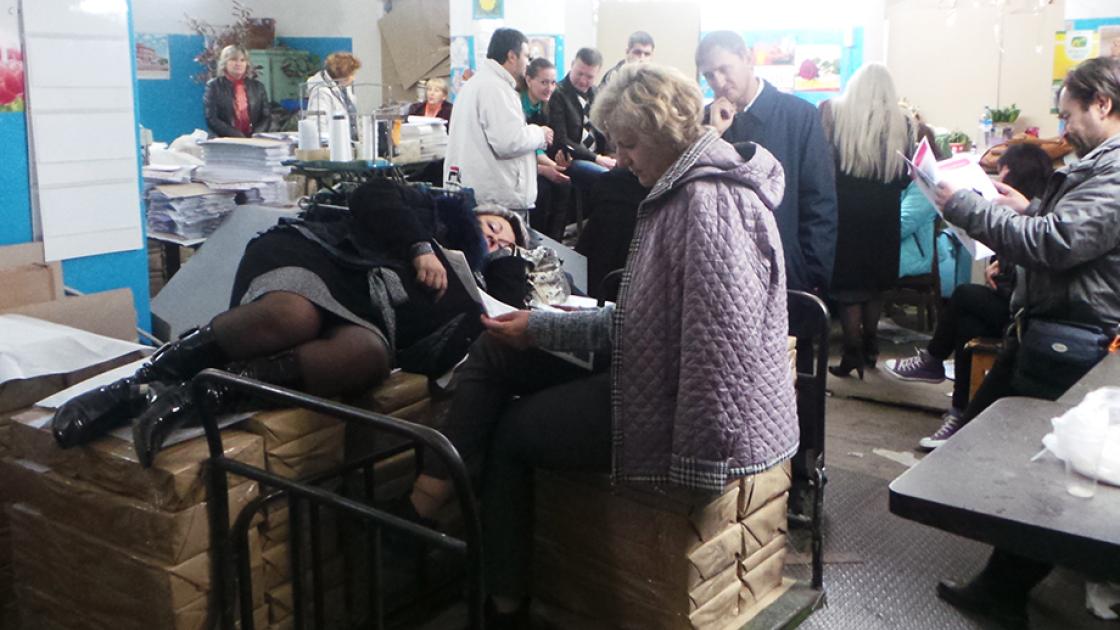 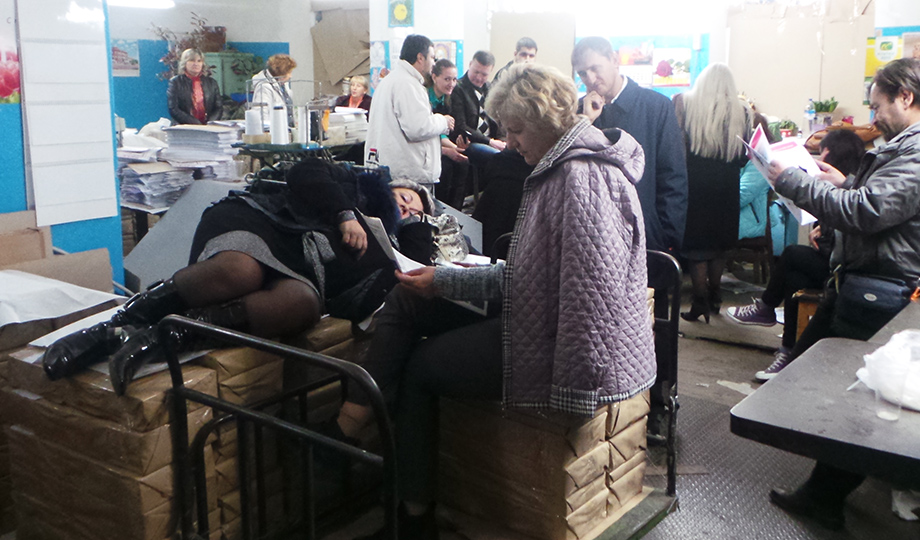 Photo: Electoral Commission members, who rejected the problematic ballots in Mariupol following an inspection on the eve of the election, occupied the printing house to ensure that the faulty ballots were not distributed to polling stations. Photo credit: Novosti Donbas

Sunday’s balloting was marred by some serious problems, but also featured genuine competition and efforts to prevent fraud. The next test lies in the performance of the newly elected officials.

The preliminary verdict on yesterday’s elections in Ukraine for local council and mayoral seats is generally positive, with a coalition of international observers concluding that the “elections were competitive, well organized overall and the campaign generally showed respect for the democratic process.”

Yet the voting, held amid an economic and security crisis under an election law that is less than four months old, displayed many of the same systemic problems as the 2014 parliamentary and presidential elections and the tainted 2015 special parliamentary election in Chernihiv. Among these persistent challenges are the opaque influence of moneyed interests, felt especially through unmarked advertising in the media; a complex legal and procedural framework; and the fact that millions of people have been displaced across the country and are consequently unable to vote.

The final results are still coming in, but they seem to confirm preelection expectations: The Opposition Bloc (including many former members of ousted president Viktor Yanukovych’s Party of Regions) and the pro-European, center-right Samopomich Party maintained their dominance of key areas in the east and west, respectively, while President Petro Poroshenko’s sinking popularity contributed to a weak showing for his Solidarity party. Still, several highly competitive races will not be decided until runoffs are held in mid-November.

With Ukraine embarking on crucial constitutional, political, and economic reforms, in particular the devolution of authority to the regions and towns, those elected in these local contests will play an important role in Ukraine’s development in the coming years.

More than five million people in Crimea and the eastern regions of Donetsk and Luhansk were unable to vote due to the violence and absence of elections in those areas, according to the observer mission. As highlighted by the civic initiative Involuntarily Voiceless, organized by CrimeaSOS, around 1.5 million internally displaced people, even those from towns currently controlled by the Ukrainian government, are deprived of their electoral rights because Ukrainian law severely limits voting by citizens away from their official place of residence. 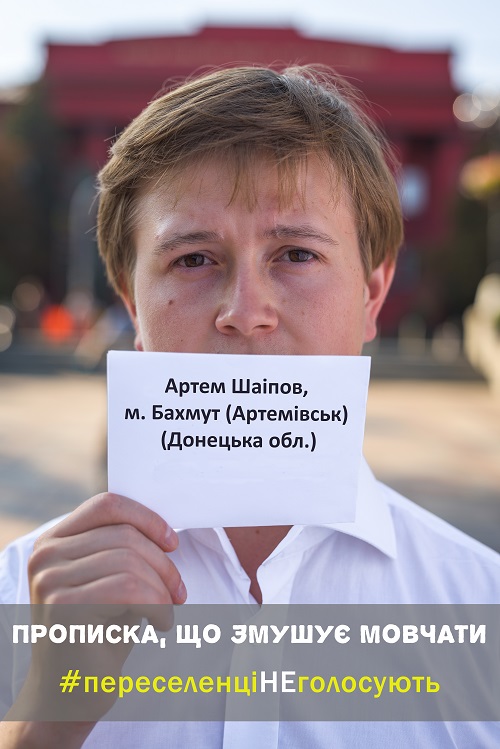 Above: A resident of Bakhmut in Donetsk Oblast highlights the fact that displaced persons cannot vote because they are not living where they are officially registered. The caption reads, “registration forces us to be silent.” Photo credit: Oleksandr Shpigunov, CrimeaSOS

Electoral fraud in its various forms—including vote buying, bribery, and carousel voting—continues to stymie Ukraine’s democratic development. The 2015 local elections were no exception. Several independent watchdog groups, such as the Committee of Voters of Ukraine (CVU), produced reports documenting instances of such violations. One notable example was the veiled distribution of food packages by political forces in Khmelnytsky, Cherkasy, Dnipropetrovsk, Cherkasy, Chernivtsi, Mikolayiv, Zaporizhzhya, Poltava, and Zhytomyr. Others included the party Nash Krai organizing free equestrian lessons for children and their parents in Lviv, and party representatives from Hromadska Syla giving out free trampolines for kids in Dnipropetrovsk.\

A controversy over flawed ballots

Impending electoral irregularities in the city of Mariupol prompted a dramatic response. A firm controlled by the oligarch Rinat Akhmetov reportedly misprinted the ballots, which listed one political party twice while not listing another at all. President Poroshenko ordered an investigation into the matter and aborted the city’s elections due to the ballots’ “improper preparation.” In order to ensure that the problematic ballots would not be used, local election commissioners took the situation into their own hands, occupying the printing facility to prevent the stacks of forms from being distributed.

Similar situations unfolded in the cities of Krasnoarmiisk and Svatove, which also postponed their elections due to allegations of improper ballot preparation. While these actions may have been admirable efforts to thwart electoral fraud, some critics raised the possibility that they had been carried out to hide Poroshenko’s declining popularity in Ukraine’s regions, particularly in the east. Mariupol, Svatove, and Krasnoarmiisk will likely face fresh elections in mid-November. In that case, a repetition of each stage of the elections, not simply a revote, should be conducted—particularly a reprinting of the ballots.

Improvements and manipulation in the media

There were some improvements for media freedom, in particular journalists’ access to polling stations. Nevertheless, jeansa, or unmarked political advertising, was rampant in the months before and during the voting. Jeansa has undermined media freedom in Ukraine for many years and greatly restricts journalists’ ability to provide independent reporting and balanced coverage to all participants in the electoral process.

In its preelection assessment, the Organization for Security and Co-operation in Europe warned of the prevalence of jeansa as well as the Law on Local Elections’ failure to provide free airtime for candidates. Analysts at the Institute of Mass Information (IMI), a Freedom House partner, called the local elections “the largest pre-election jeansa campaign” they had yet witnessed. Among the worst offenders were Vitaliy Klitschko and Hennadiy Korban, rival candidates for Kyiv’s mayoral post; and Boris Filatov, Aleksandr Vilkul, and Maksym Kuryachiy, the candidates for mayor of Dnipropetrovsk.

Ukraine’s eastern regions are rife with jeansa, and mayoral candidates Arsen Avakov and Hennadiy Kernes, who faced off in Kharkiv, fit the pattern. Some of the largest tallies of jeansa media items were reported in Dnipropetrovsk (934), Zaporizhzhya (483), and Mikolayiv (160); in the cases of Dnipropetrovsk and Zaporizhzhya, the instances of jeansa had increased fivefold and twofold, respectively, since the 2014 parliamentary elections. Some of the biggest offenders among the political parties were Korban’s UKROP (26 percent of the documented items) and Kernes’s Renaissance (15 percent).

During the electoral process, IMI recorded five press freedom violations across the country, including in Lviv, Lutsk, Novovolynsk, Vinnytsia, and Dnipropetrovsk, which is a marked improvement from last year’s parliamentary election period, when nine press freedom violations were documented. Journalists could not access electoral information in a transparent way, including information about election preparation, organization, and results after the ballots were counted. The Central Electoral Commission did not publish this data. Nevertheless, there was some progress—in Lviv, a law enforcement official who obstructed a journalist’s access to a polling station is facing a court case.

Despite these challenges, Ukraine is slowly transforming into a more tolerant, transparent, and open democracy, where elections are competitive and revolve around issues that matter to the population. The real test for Ukraine’s democratic development will be how the newly elected local leaders perform. With Ukraine’s process of decentralization moving forward, they will be empowered with new authority and new resources, creating expanded opportunities for both the corruption that continues unabated across Ukraine, and locally led political and economic development that ordinary citizens can participate in and shape.