February 11 marks four years since Mubarak was forced from power in Egypt. On this anniversary, Freedom House offers a timeline that chronicles how a social justice movement incubated online, exploded onto the streets, and is now being driven toward extinction by new dictatorship.
Written By 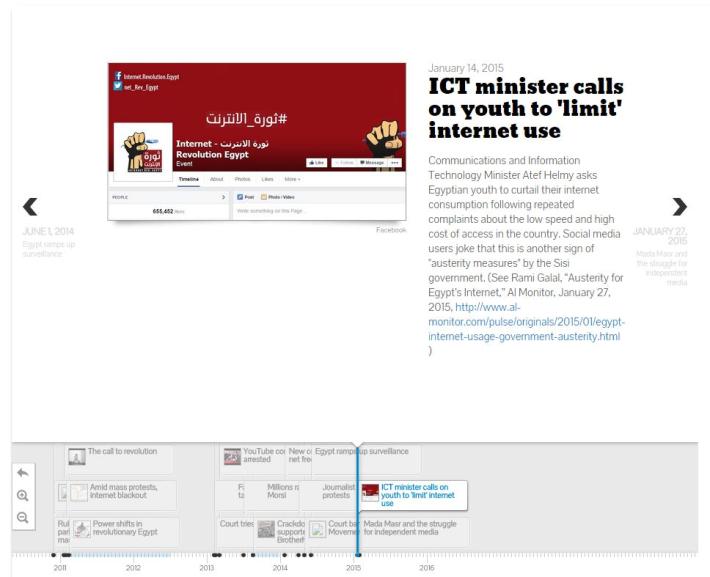 February 11 marks four years since Hosni Mubarak was forced from power in Egypt. On this anniversary, Freedom House offers a timeline that chronicles how a social justice movement incubated online, exploded onto the streets, and is now being driven toward extinction by new dictatorship.

In January 2002, the Egyptian government made headlines by offering internet access at the low cost of a landline call. The modernization of Egypt’s information and communications technology (ICT) sector was promoted as a tool for economic growth and scientific progress. Within 10 years, however, the same government would follow the likes of Nepal and Myanmar by shutting down ICT networks amid nationwide protests. How had the internet grown into an existential threat to such a powerful regime?

With so much of Egypt’s traditional media under state control, new users had flocked to the internet as a space for free expression, independent news, and camaraderie with like-minded citizens. The country’s blogosphere matured by 2005, with tech activists taking the lead in aggregating hundreds of Egyptian blogs. There were early signs that social media could play a positive role in civic affairs. In 2007, a court used video evidence from journalist Wael Abbas’s YouTube channel to convict police officers for abusing a bus driver. Digital activism reached a turning point one year later, when a Facebook group was set up to organize a labor protest on April 6, 2008. That group spawned the April 6 Youth Movement, whose members went on to organize numerous demonstrations.

One of these protests was scheduled for January 25, 2011, an annual holiday celebrating Egypt’s police. Amid flawed parliamentary elections in late 2010, an inspiring popular uprising in Tunisia, and outrage over police abuses, momentum for a large demonstration grew. On January 18, April 6 activist Asmaa Mahfouz posted an impassioned plea to protest on YouTube. Wael Ghonim, administrator of the anti–police brutality Facebook page “Kullena Khaled Said” (“We Are All Khaled Said”), created an event feature calling on the page’s 380,000 followers to gather in Tahrir Square. Observers have struggled to explain the events that followed. Although the expanding independent labor movement and other factors played crucial parts, the early labeling of the uprising as a “social media revolution” reflected the impression that, in one fell swoop, long-held frustrations had abruptly and irrevocably spilled over from the online world to the streets.

In the four years since #Jan25, however, the ability of Egyptians to organize protests, operate independent news outlets, and express themselves on social media has been sharply curtailed. Freedom House’s annual Freedom on the Net report documents how successive Egyptian governments have arrested users for insulting state bodies, physically harassed online journalists, and instilled self-censorship by increasing the monitoring of social media. Unlike in Bahrain or Saudi Arabia, the websites of human rights and opposition groups remain accessible within Egypt. But with overly broad restrictions on organizations that receive foreign funding, trials of civilians in military courts, and laws prohibiting unlicensed protests, the authorities have quickly erased the gains of the revolution. A revamp of the country’s antiterrorism laws has been under discussion in recent months, and further restrictions on online speech are undoubtedly on the way.

This would be a profound mistake. Just as the decision to cut off internet access in January 2011 drove even more Egyptians to Tahrir Square, so will the government’s newest efforts to restrict the internet exacerbate the public’s bottled-up frustrations. As events have shown in many countries of late, repression of moderate and peaceful dissent simply encourages radicalization. And at a time when both Islamist and liberal opposition movements have been banned in Egypt, channels for nonviolent political action are drying up. The most effective means of achieving the revolution’s demands for freedom, dignity, and social justice is a democratic process that mirrors the open and inclusive nature of an unfettered internet. By closing all space for peaceful public discourse, the government is contributing to the very instability it claims to be combatting.

A look into the history of online activism in Egypt shows that technology is instrumental to the upholding of human rights, that digital communities take years to coalesce into viable social movements, and finally that activists in Egypt—like those in dozens of countries around the world—now face an uphill battle.

Trouble viewing the timeline? Click here for a full-screen version.