Fraying Rule of Law and Free Expression: The Stakes for Business

Freedom House president Mark P. Lagon delivered the following remarks at an April 6 event on emerging markets and the rule of law, cohosted by Freedom House and the U.S. Chamber of Commerce. 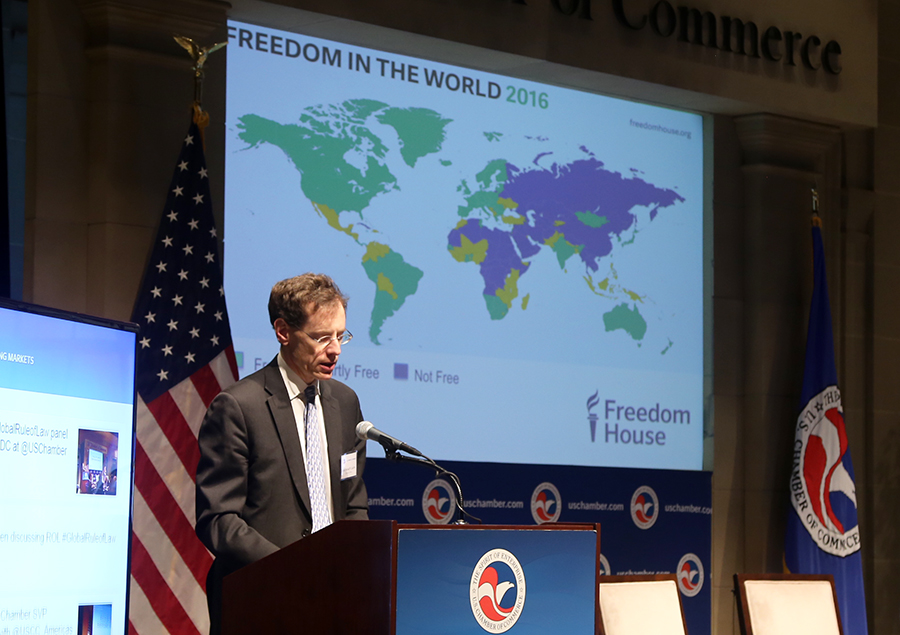 According to Freedom House’s annual Freedom in the World survey, more nations have been slipping in political rights and civil liberties than improving over the past 10 years. One hundred and five countries suffered net declines in their scores for political rights and civil liberties—more than half the world’s sovereign states—whereas only 61 countries have registered net gains. While many countries had small declines, there have been noteworthy reversals in countries that exercise influence on the global or regional stage, such as Russia, Turkey, Hungary, Azerbaijan, Ethiopia, and Kenya.

Rule of law and freedom of expression are drivers of the downward trend. The indicators experiencing the largest setbacks in the last decade are press freedom, freedom of belief, and academic freedom, as well as the independent judiciary, fair court proceedings, legal equality, and freedom from state or non-state violence.

Rule of law scores vary vastly by region. Countries in Eurasia and the Middle East and North Africa are the worst performers, while countries in Europe and the Americas perform better. Within the rule of law category, the greatest declines were registered in the due process and torture/crime indicators.

If the courts cannot uphold the legislative framework, if violence plagues the population and organized crime groups are able to intimidate leaders (such as in Mexico and Central America where Freedom House has programs addressing these problems), and if the constitutional and legal rights of minorities aren’t protected by courts, then rule of law, governance, predictability, stability, and prosperity crumble.

Some of the steepest setbacks in the past decade have occurred in illiberal democracies such as Hungary, Turkey, and Ecuador. These are countries where elections are conducted and an opposition victory remains possible, but the institutions that provide checks and balances have been hollowed out and taken over by the executive. Judicial independence is a special target of illiberal leaders like Hungary’s Viktor Orbán and Ecuador’s Rafael Correa. These leaders have pressured the top courts and made constitutional changes in their own favor.

The global decline has been substantial in states ranked in the Not Free category, and authoritarian regimes are becoming even more repressive. Political control over the press, civil society, and the justice system is essential to dictators’ ability to maintain power. In many cases elected authoritarians clamp down on independent media and NGOs before election campaigns get underway. These tactics draw less attention than canceling elections or firing on protesters, and also demonstrates that true democracy requires much more than the mere holding of elections.

Authoritarian leaders strive to pass off acts of political repression as legal, and to do so, must control the instruments of the legal system like the police, prosecutors, judges, and in some cases, defense lawyers. For example, shortly after he was elected, President Putin declared that in Russia a “dictatorship of law” would prevail. He has overseen legal persecution of high-profile dissidents, NGOs, and academics. This effort also included the death of a lawyer who was wrongly jailed for documenting corruption, Sergei Magnitsky.

In China, when economic growth wavered with the stock-market drop, the PRC government responded with enhanced censorship and propaganda efforts, and an enhanced crackdown on civil society. For example, within a 48-hour period in July 2015, over 200 individuals involved in public-interest legal activism were taken into custody in a nationwide sweep. Groups whose work had previously been tolerated but who became targets were financial journalists, as well as advocates of public health and women’s interests.

Strong growth in certain repressive states, especially the PRC, gives the misleading impression that authoritarianism is good for business. However, stable, transparent governments built on respect for human rights and rule of law tend to foster environments that are conducive to the establishment and unfettered operation of private enterprises. This effect is illustrated in the correlation we see between Freedom in the World and the World Bank’s Doing Business scores.

To further show the relationship between rule of law and doing business, the World Bank’s Doing Business “distance to frontier” indicator signifies how each country compares to the best performance. Moreover, as rule of law is the driver of Freedom House rankings, when Freedom House’s rule of law score is higher, the World Bank’s “distance to frontier” score varies accordingly. Where rule of law is weak, the elite are in essence above the law, and are able to use their power to gain business advantages over their competitors, and even drive competitors out of the market.

While some dictatorships may appear more stable than democracies, they generally impose more red tape, build up barriers to trade, fail to enforce contracts, and breed corruption. The political crackdowns and security crises associated with authoritarian rule often drive out business and place employees, supply chains, and investment at risk. These effects also raise reputational and legal concerns for foreign companies that stay involved.

Countries that restrict rule of law and freedom of expression destroy societal trust and encourage more uniform, narrow, and rigid forms of thought. In these societies innovation cannot thrive.

Protecting freedom promotes transparency and access to information, which reduces uncertainty and the likelihood of unfounded litigation. When an individual’s freedom of expression is restricted, local populations may not voice their concerns. The result is that businesses have to devote time and money to taking the temperature of local communities. In places where laws do not protect freedom of expression, reporters and activists are not free to expose cronyism, bribery, and extortion.

Rule of law, freedom of expression, and democracy are not the only factors behind good economic performance, but more often than not they provide long-term political stability and corrective mechanisms that form a foundation for safe investment and steady growth. Beyond implementing honorable values, businesses, their shareholders, and their customers have a large stake in rule of law and democratic governance.

In conclusion, one good example that shows the impact businesses have when they support rule of law and freedom of expression. In March 2015, Rafael Marques de Morais was charged with multiple counts of criminal defamation for reporting on the Angolan military’s involvement in 500-plus cases of torture and 100 murders in the diamond-mining district—along with general corruption. He faced up to nine years in prison and $1.2 million in damages.Tiffany and Co., Leber Jeweler, and Brilliant Earth joined an international campaign on Marques’s behalf by issuing statements and signing letters from press freedom advocates to Angolan president José Eduardo dos Santos. Mr. Marques is out of prison and his sentence suspended for two years.  Businesses have a stake in change and can contribute to it.