Freedom House urges the Trump administration to call for an independent investigation of the murder of Jamal Khashoggi, and to issue sanctions on those responsible for his death.

We urge your administration to take a much stronger stance on the disappearance of Saudi journalist Jamal Khashoggi. Mounting evidence strongly indicates that he was tortured and murdered – and that the subsequent cover up occurred at the direction of Saudi leaders. We urge you to respond strongly and swiftly by calling for a credible, independent international investigation and by issuing U.S. sanctions on those responsible for Khashoggi’s death.

Your administration has thus far failed to convey the gravity and seriousness of this moment for US-Saudi relations. We appreciate Secretary Pompeo’s calls for a transparent investigation and Vice President Pence’s acknowledgment that accountability for this crime is especially important given Mr. Khashoggi’s role as a journalist. However, other actions by your administration – such as Secretary Pompeo’s inconclusive meetings with Saudi officials, your premature remarks that appear to absolve Saudi leaders of responsibility, and your repeated stress on commercial relations as the critical factor in the United States’ response to this incident – send a troublingly ambiguous message about the administration’s attitude toward the murder of an internationally prominent journalist and U.S. resident.

For the government of any nation to murder its own citizens is appalling. In this case, the apparent murder took place in a NATO member country. The victim was a resident of the United States. He was a prominent and respected journalist. This crime thus represents a blatant disregard for international law, a violation of the most basic human right, and a contemptuous attitude toward state sovereignty.

It is critical for U.S. credibility that you send an unambiguous signal that such brazen contempt for the rule of law and human rights will not be tolerated or ignored. The fact that the apparent murder was committed by a so-called “ally” makes this incident all the more reprehensible, especially when the Saudi government invokes its role as ally as part of a campaign to evade responsibility for the crime. It is time to recognize that improvements in human rights and democratization in Saudi Arabia should be a stated goal of American policy. For Saudi Arabia to truly be brought into the modern era, ordinary citizens should be able to participate, criticize, and lead without fear. For the past 30 years, Saudi Arabia has received the worst possible ratings in the Freedom in the World report for political rights.

The gravity of this matter was made clear in a letter sent to you on October 10, 2018 by a bipartisan group of more than 20 senators, including the chair and ranking member of the Senate Foreign Relations Committee. That letter triggered for the first time a provision of the Global Magnitsky Act which requires the administration to determine within 120 days whether a foreign person or entity has committed or is responsible for “extrajudicial killings, torture, or other gross violations of internationally recognized human rights” and report to Congress on whether or not sanctions were imposed. We urge you to heed your promise to punish perpetrators of Khashoggi’s disappearance by adhering to this provision and promptly identifying and sanctioning those responsible for the apparent murder of Jamal Khashoggi.

The apparent attack on Mr. Khashoggi is not only a horrible violation of his human rights as an individual, it is also an attack on press freedom – a cornerstone value of democracy of special concern to Americans. Unless met with vigorous action, it will encourage other dictators to believe they can employ violence against their critics, against even those living beyond the dictator’s borders.

This is an extraordinary moment in global affairs. Americans and the world expect clear moral leadership from the United States. We would strongly urge that, in words and actions, you focus on the crimes against an innocent individual and not on commercial relations with the Saudis, and that you support a credible, independent international investigation into the Khashoggi case and swift sanctions on those responsible for Jamal Khashoggi’s death. 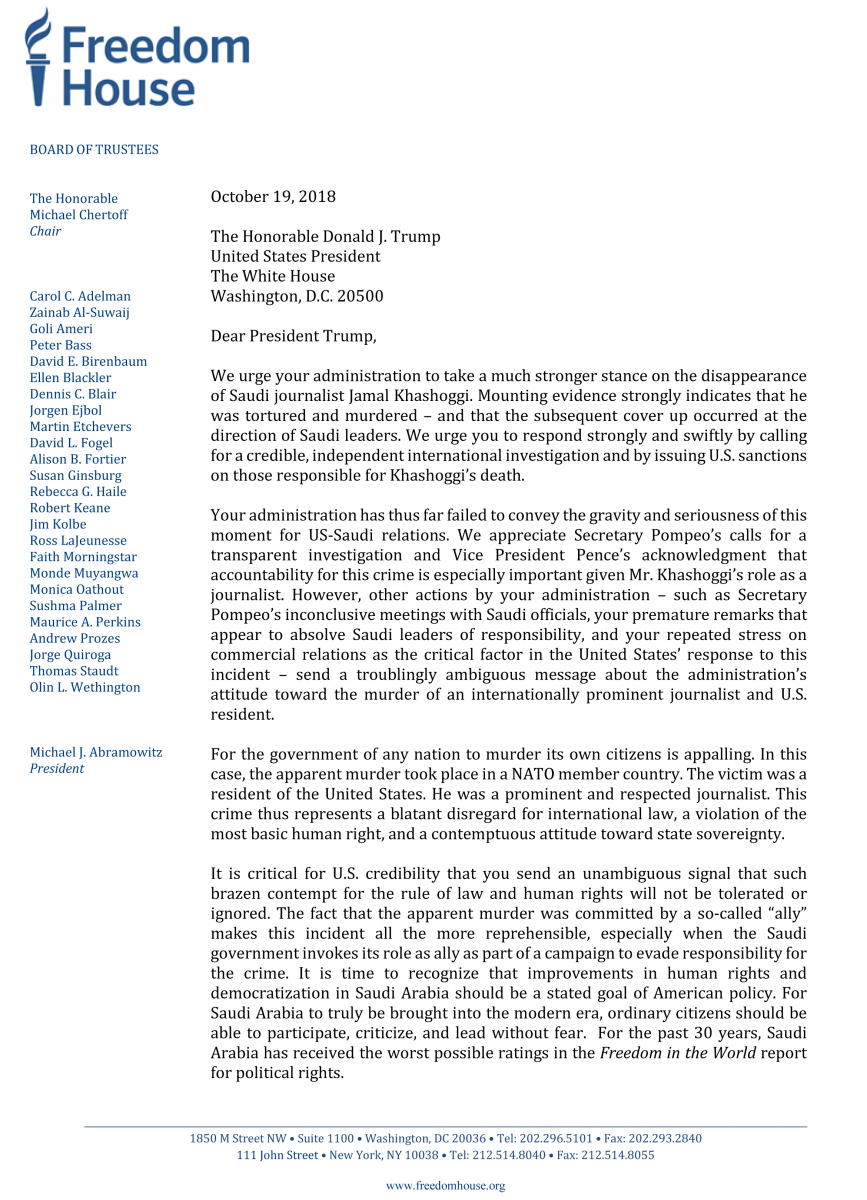 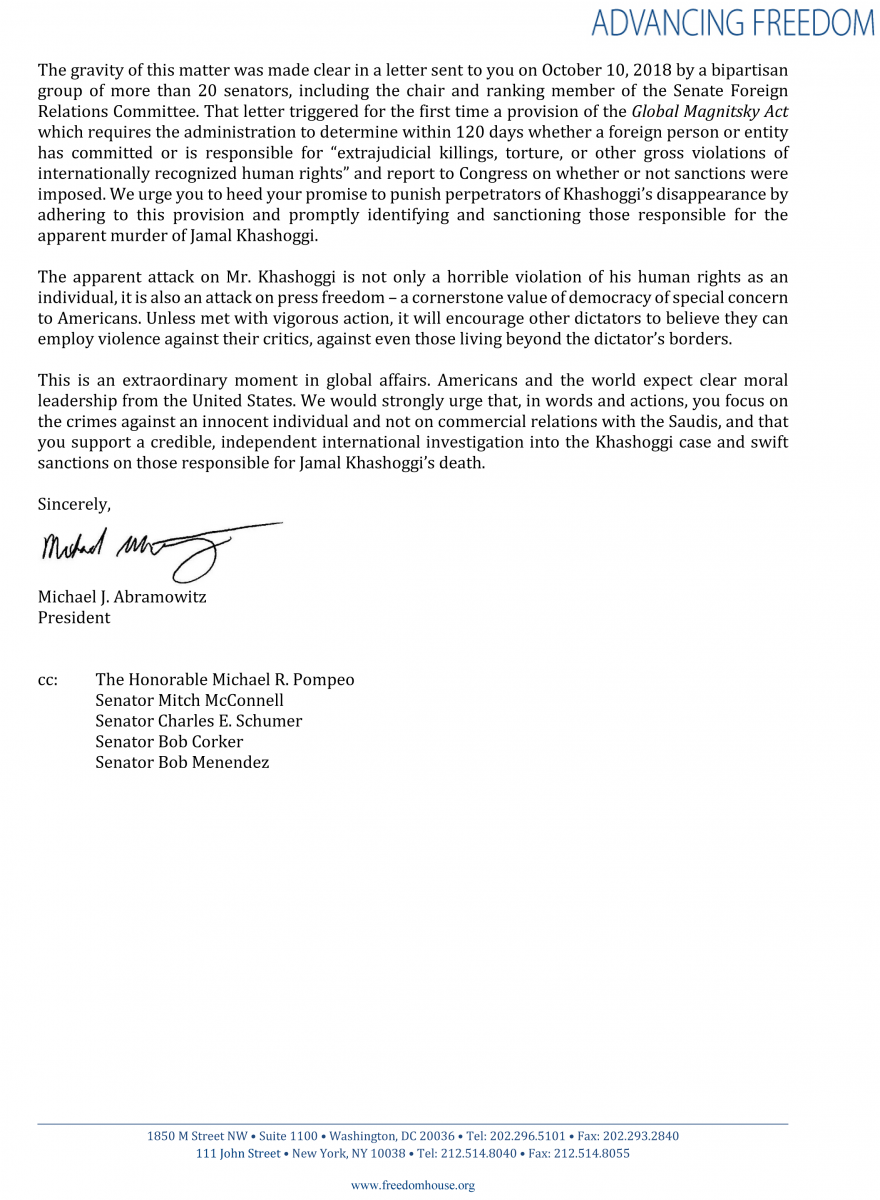