What happens when democracies are guilty of backsliding? 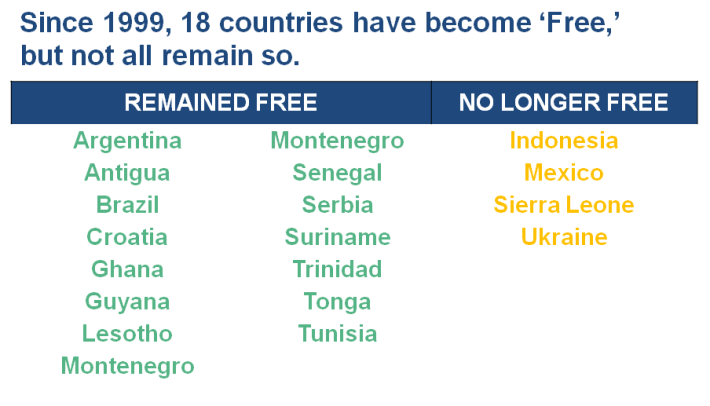 Over the past year, the world’s democracies have had to contend with aggressive dictatorships, terrorist armies, and other external threats. But recent history shows that they should also beware of backsliding in their own ranks.

Ideally, once a country achieves the status of Free in Freedom House’s annual Freedom in the World report, it should be a solid and reliable member of the democratic camp, ready to help its peers combat the influence of authoritarian states and advance good governance in countries that are still ranked Partly Free or Not Free.

This has been true to a large extent over the past three decades. The surge of democratization around the world that culminated in the fall of the Berlin Wall and the collapse of the Soviet Union produced many Free countries that remain so today, from Chile and South Africa to Poland and Taiwan.

However, the wave of progress leveled off after the turn of the century, and the latest edition of Freedom in the World, released this week, marked the ninth consecutive year in which countries with score declines actually outnumbered those with gains.

While in many cases the losses involved Partly Free countries becoming Not Free, or Not Free countries getting even worse, Free countries have not been left untouched by the recent deterioration. Of the 18 states that achieved Free status since 1999, four—Mexico and Ukraine in 2010, Indonesia and Sierra Leone in 2013—later slipped back into the Partly Free category. 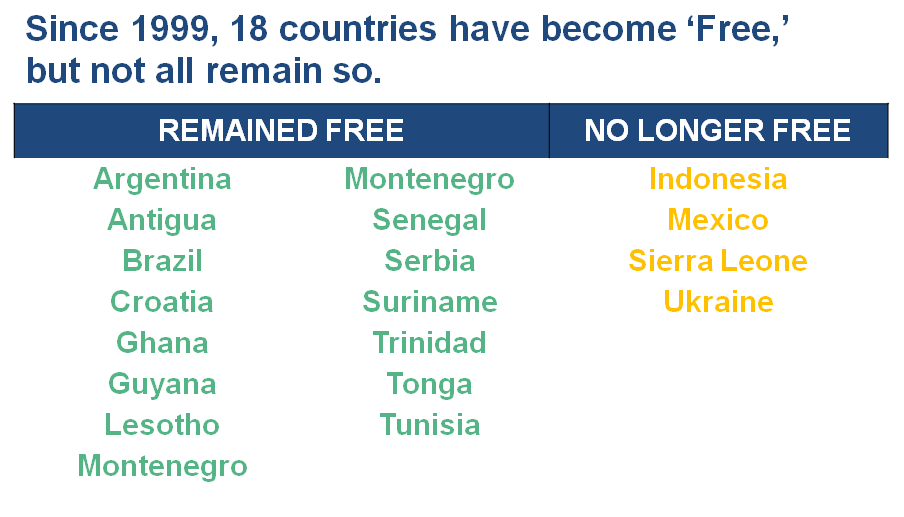 Moreover, many of the others may have been too small to affect the broader global trend of declines—a pattern of lopsided changes that held true across all freedom rankings over the past year. While relatively minor states like Fiji and Guinea-Bissau improved their scores or status, regional heavyweights including Egypt, Turkey, Thailand, and Uganda fell backward, with the latter two falling into the Not Free category.

It is clear, then, that Free countries do not automatically retain that status forever. Indeed, most democratic societies fully understand that they must work constantly to defend their own rights from a variety of current or potential infringements. But they should also remain watchful for violations among fellow democracies, or allies in the global struggle for freedom could suddenly become part of the problem.