Freedom’s Biggest Gains and Losses in 2014

The biggest score changes in Freedom in the World 2015 illustrate the damage wrought by military coups, civil wars, and authoritarian power grabs. 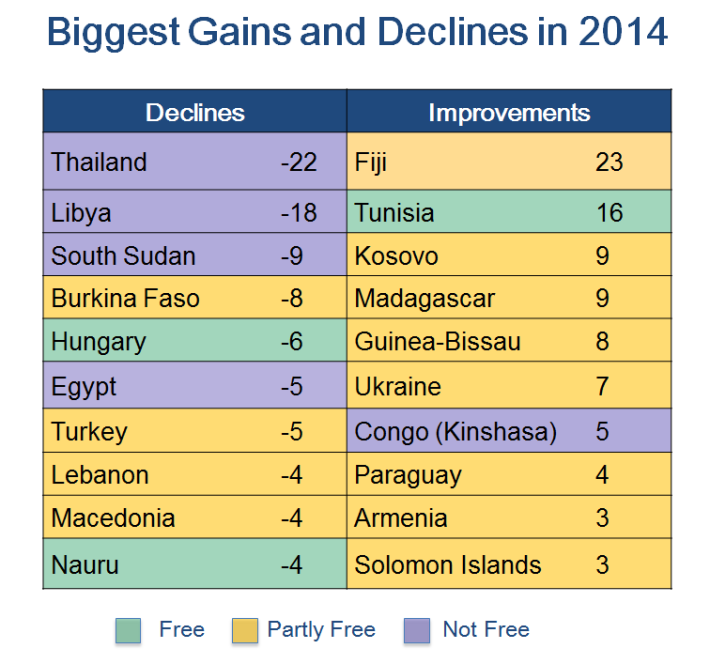 Today Freedom House releases the findings of Freedom in the World 2015, the latest edition of its annual report on political rights and civil liberties in 195 countries around the globe. Below is a list of those with the biggest gains and losses for 2014, on the report’s 100-point scale. The resulting numerical scores are used to determine a country’s status of Free, Partly Free, or Not Free.

Freedom in the World has recorded nine consecutive years of overall decline in democracy, and developments in 2014 were exceptionally grim. Several countries of regional significance—such as Thailand, Libya, Hungary, Egypt, and Turkey—were among those that suffered the largest setbacks.

Moreover, most of the countries that experienced major losses did so as a result of military coups or civil wars. 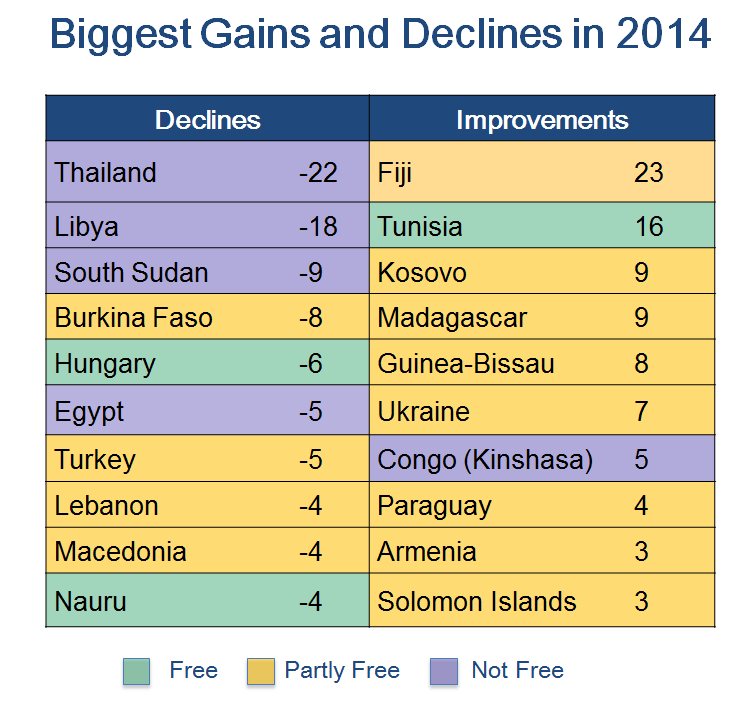 In Thailand, the military leaders responsible for the removal of Prime Minister Yingluck Shinawatra and her elected government made clear that a return to democratic rule will not take place in the foreseeable future. The military in Burkina Faso commandeered a political transition after the ouster of the president. In Egypt, the military-dominated government established after a 2013 coup continued its rollback of post-Mubarak democratic gains, and solidified the country’s return to autocracy with sham elections and a crackdown on all forms of dissent.

Libya’s tentative improvements following the ouster of Mu’ammar al-Qadhafi rapidly disintegrated as the country fell into a new internal conflict. The effects of the Syrian civil war paralyzed elected institutions in Lebanon. And a conflict sparked by political infighting continued to rage in South Sudan, fueling widespread ethnic violence and displacement.

Equally disconcerting is the fact that two important democracies were among the countries with the year’s biggest declines. In Hungary, parliamentary and local elections revealed the extent to which recent legislative and other changes have tilted the playing field in favor of the ruling party, Fidesz. Observers noted slanted media coverage, the misuse of state resources, gerrymandering, and campaign spending problems. With its renewed parliamentary supermajority, Fidesz continued to transform the country’s institutions, facing few obstacles from the divided and enfeebled opposition.

Turkey also drifted much further from democratic norms, as President Recep Tayyip Erdoğan consolidated power during the year and waged an increasingly aggressive campaign against democratic pluralism. He openly demanded that media owners censor coverage or fire critical journalists, told the Constitutional Court he does not respect its rulings, threatened reporters (and rebuked women journalists), and ordered radical, even bizarre changes to the school curriculum. Having risen from the premiership to the presidency in August, he formed a “shadow cabinet” that allows him to run the country from the presidential palace, circumventing constitutional rules and the ministries of his own party’s government.

Among the biggest gains, Tunisia took its place among the Free countries of the world. This is remarkable not just because it was ranked Not Free only five years ago, but also because Tunisia is so far the only successful case among the many Arab countries that exhibited some political opening during the 2011 Arab Spring. The improvements that pushed it into the Free category included a progressive constitution adopted in January 2014 and well-regarded elections for parliament and president later in the year. Score increases in Kosovo and the Solomon Islands were also due in part to successful elections.

Events in Eurasia in 2014 were dominated by the upheaval in Ukraine. Gains related to the ouster of authoritarian president Viktor Yanukovych through the Euromaidan protests in February, which led to the free election of a new president and parliament later in the year, were offset by Russia’s seizure of Crimea in March and ongoing battles with pro-Russian separatists in eastern Ukraine.

The large improvements in Madagascar, Guinea-Bissau, and Fiji were all due to elections, held during late 2013 and 2014, that ended transitional periods following coups in previous years, and it remains to be seen whether the gains will be consolidated over the long term.

These three countries serve as another reminder that military coups, far from a 20th-century relic, are a serious and possibly growing threat to democratic order. And while the international community is often able to apply pressure and help restore free elections in smaller countries, its response has been inconsistent and ineffective when faced with military takeovers in major states like Egypt and Thailand.