The Future of Election Observation after Kenya’s Supreme Court Judgement

The shortcomings of the international missions in Kenya present an opportunity to improve election monitoring standards for all countries. 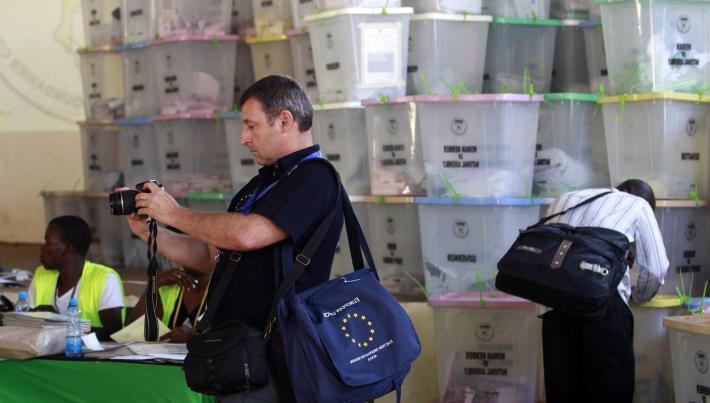 The shortcomings of the international missions in Kenya present an opportunity to improve election monitoring standards for all countries.

The annulment of the outcome of Kenya’s presidential election by the Supreme Court on September 1 has, predictably, led to questions about the role and credibility of international observers. The international groups that monitored Kenya’s election included the Carter Center, the African Union, the European Union, and the Commonwealth. Various local observers, such as the Election Observation Group and the Kura Yangu Sauti Yangu coalition, were also involved in the process.

When they issued their interim statements in what looked like choreographed press conferences before the announcement of results, the international observers effectively gave the election a clean bill of health. Interestingly, Kenya’s cabinet secretary, Amina Chawahir Mohamed, was a participant in some of the press conferences. Former U.S. secretary of state John Kerry, head of the Carter Center team, was quoted as saying that the country’s Independent Electoral and Boundaries Commission (IEBC) had put in place a transparent process for voting, counting, reporting, and securing the vote. The Commonwealth mission’s leader, former Ghanaian president John Mahama, had no doubt that the election was conducted in a transparent and credible manner. Former South African president Thabo Mbeki of the AU delegation was satisfied with the conduct of the electoral commission. The EU’s Marietje Schaake stressed the importance of election losers accepting defeat, noting that “candidates and their supporters must accept that not winning is a natural part of a democratic competition.”

The sharpest criticism of international observers came from opposition presidential candidate and former prime minister Raila Odinga, who said they had sanitized electoral fraud, and from the Kura Yangu Sauti Yangu coalition, whose statement read in part: “Finally, the role of observers—both local and international—in the elections has come into sharp focus. An urgent review of the process for the appointment of international observers with a history of crimes against humanity, fiddling with elections or who have obvious geopolitical and partisan interests is necessary. It is noteworthy that domestic observers were the ones who identified the issues that were at the heart of the August 8, 2017 elections, and international observers’ willingness to accept and dismiss those issues as negligible exposes the weaknesses in the standards they use to assess electoral integrity.”

The coalition went on to declare its intention to lead the civil society sector in developing its own standards to be applied in future election observation, using the findings from several years of election observation and analysis. The statement argued that in future elections, international observers should only be welcomed if their work supports the attainment of the established standards.

Criticism of the international observers was not confined to Kenya. A professor of political science at the University of Ghana, Michael Kpessah Whyte, reportedly said,  “We need to see the details of the ruling, but this ruling raises a lot of questions about the credibility of international observers and whether they really are looking at substance or they are looking at form, and whether they would be relevant going into the future at all.”

It is noteworthy that none of the critics has definitively called for the abandonment of international observation, a possible sign of its ongoing usefulness. One of the frameworks governing the conduct of international election observation, the Declaration of Principles for International Election Observation and Code of Conduct for International Election Observers, characterizes international election observation as part of the process of democratization. It is also a critical part of monitoring human rights, especially civil and political rights. According to the document, international observation must be conducted on the basis of the highest standards of impartiality with regard to national political competitors. Observers must be free from bilateral or multilateral considerations that could undermine their impartiality.

Kenya’s 2017 electoral experience should therefore be seen as an opportunity for reflection and improvement. Certainly, the issues raised by Kura Yangu Sauti Yangu are important, as they focus attention on election observers’ adherence to the framework that is supposed to govern their conduct. Peter Kiama, who leads the Independent Medico-Legal Unit (IMLU), a Kenyan civil society organization affiliated with Kura Yangu Sauti Yangu, believes it is essential to debate the role of international observers as Kenya heads toward a rerun of the presidential election. He reinforces the argument made by the coalition that there is a need to develop better standards for international election observers.

There is also a need to address the challenges that observers face. Regina Opondo, who chairs the Election Observation Group, says the capacity of observers is especially wanting in the area of information and communication technology (ICT). The Supreme Court audit revealed unauthorized log-ins that enabled additions and deletions to data on the IEBC results portal. Use of technology in elections in Kenya is a legal requirement, and unless the law is changed, the potential misuse of this technology will continue to be a crucial factor in the assessment of any election.

Proper emphasis should be given to improving the methods of observers and investing in longer-term missions, which leads to better understanding of the political context. In a country with a history of political assassinations and extrajudicial killings, accompanied by poor investigations, far more attention should have been paid to the killing of election commission ICT manager Chris Msando and the implications it would have for the electronic aspects of the election. As stated in the Declaration of Principles for International Election Observation and Code of Conduct for International Election Observers, “while all election processes should reflect universal principles for genuine democratic elections, no election can be separated from the political, cultural and historical context in which it takes place.”