Germany Prepares for a Post-Merkel Future 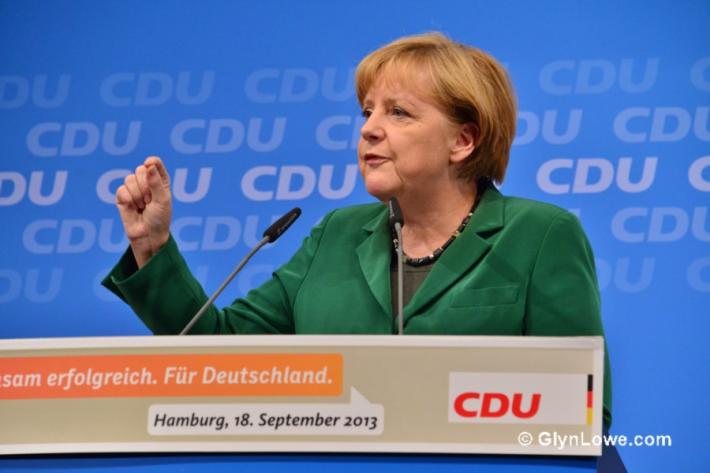 Angela Merkel will step down as leader of the CDU. Credit: GlynLowe.com

On October 29, German chancellor Angela Merkel announced that she was stepping down as leader of the Christian Democratic Union (CDU), the dominant party in the ruling coalition. She will not run for chancellor in the next federal election in 2021, and a new CDU leader will be selected this week.

Merkel has served as chancellor for 13 years, and since the election of US president Donald Trump in 2016, she has been hailed by many as “the leader of the free world.” Her accomplishments include guiding the European Union through the global financial crisis that began in 2008, taking a firm stance against Russia after its illegal occupation of Crimea and invasion of eastern Ukraine, and confronting the refugee crisis in 2015 by absorbing the sudden influx and then forging agreements with Turkey and others to stem new arrivals. Although she has received criticism for her performance on these issues, her long tenure and steady hand have been seen as a force for stability in the region, and the effects of her departure will certainly be felt throughout Germany and the EU.

Merkel endured for three years after the refugee crisis, but the backlash she faced for allowing a million migrants into Germany has finally pushed her to resign. Although many Germans initially endorsed her policies and “Wilkommenkultur” (welcoming culture), various incidents associated with refugees have eroded public support and emboldened her right-wing opponents. The sexual abuse of some 1,200 women across different German cities on New Year’s Eve 2015, the terrorist attack at a Berlin Christmas market in 2016, and the alleged killing of a German by two men of foreign origin in Chemnitz in August all fueled xenophobic sentiment, and Merkel was forced to admit that she had made mistakes in responding to the crisis.

Anger at Merkel’s refugee policies has contributed to significant election losses for her party. The far-right Alternative for Germany (AfD), whose strategy is based on stoking fear over immigration, is now the third largest party in the Bundestag, the federal parliament. It has also succeeded in state elections and holds at least one seat in every state’s legislature. In the October 2018 elections in Bavaria and Hessen, AfD came in third and fourth place, respectively, with over 10 percent of the vote. Meanwhile, the CDU and its federal coalition partner, the center-left Social Democratic Party (SPD), have suffered: In the Bavarian election, support for the CDU’s local affiliate fell by 10 percentage points, eliminating its long-standing majority. The SPD received a mere 9.6 percent of the votes, its lowest recorded tally since World War II. In the Hessen election, CDU and SPD vote shares decreased by 10 points.

Given these and other setbacks at the polls, Merkel’s departure as CDU leader comes as no surprise, and many are speculating that the party will encourage her to step down as chancellor prior to 2021.

A Green future for Germany?

The rise of the AfD is a potential threat to German democracy, but it would be misleading to suggest that Germany is careening toward a populist abyss. The AfD has benefited in part from voter frustration with the two mainstream parties, the CDU and SPD, which traditionally alternated in government and opposition but have more recently ruled together in “grand coalitions.” This pattern has been especially harmful for the SPD, which ostensibly represents the working class but has lost touch with its ideology and base of support. As a result, many voters, especially the younger generations, are now looking for different options. The AfD has received the most international media attention amid wider fears about right-wing nationalism, but the Green Party (Die Grünen) has also made tremendous gains and is positioned to become a powerhouse in German politics.

The Greens, who first entered the Bundestag in 1983 as a radical environmentalist party, have since matured into a moderate liberal group that “marries traditional German culture with environmental conservation.” Their platform is outward looking, pro-EU, and pro-immigration. In a poll conducted by Der Spiegel, 47 percent said that they are considering voting for the Greens in the next federal election, and 55 percent reported that they see the Greens as “the middle party.” In the recent state elections, the Greens received the second highest number of votes in Bavaria, with 17 percent, and came in third behind the CDU and SPD in Hessen. The party is putting candidates forward for EU leadership roles in the May 2019 European Parliament elections.

While current conditions favor previously minor parties like the Greens and the AfD, it is still too soon to count out the traditional heavyweights. The CDU’s leadership contest this week will help decide that party’s place on the political spectrum. There are three contenders under consideration to replace Merkel. Annegret Kramp-Karrenbauer, the party secretary, has been dubbed “Mini-Merkel,” as she is the outgoing leader’s handpicked successor and would likely carry on her policies on European integration and other issues. Merkel’s longtime political foe, Friedrich Merz, is a more conservative candidate who has vocally opposed the chancellor’s refugee policies. The third contender, Health Minister Jens Spahn, is the youngest of the three candidates, is openly gay, and has likewise been a critic of Merkel’s approach to the refugee crisis. He has called for a new start to the CDU on behalf of the “new generations.” Whoever is chosen to succeed Merkel will have to convince voters, many of whom have defected to the AfD, that the CDU represents them and deserves their support.

The SPD will also need to reckon with its future direction. It has released a five-year plan that identifies its top priorities as pension and child care reforms, action on climate change, protection for tenants, and labor market reform. The party wants to be seen as a home for working-class voters of both German and foreign origin. Olaf Scholz, the current vice chancellor and finance minister, is reportedly preparing to run for chancellor, but to lead the party must win back its base from the Greens and even from the AfD, which has also absorbed former SPD supporters.

It is unclear how much time Merkel has left as chancellor. It is clear, however, that her departure will force Germany to make a decision on its ideological path. Will it continue to be a beacon of liberal democracy and a linchpin of European unity, or will it lurch toward xenophobic nationalism and neglect the democratic principles that have undergirded its strength and prosperity? The May 2019 European Parliament elections and the following state elections in Saxony, Brandenburg, and Thuringia may provide the answer.

Ali Cain is a former intern for Freedom House. She currently works at the Cardozo Law Institute in Holocaust and Human Rights.