The coming year holds the possibility of both positive developments and troubling setbacks for press freedom worldwide. 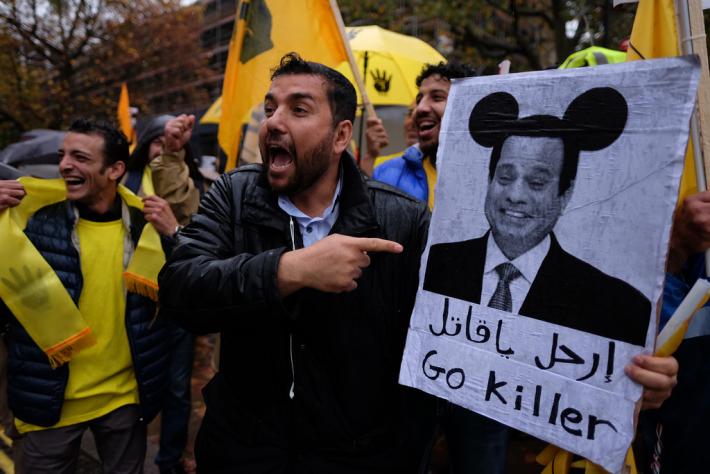 Photo from anti-Sisi protest in late 2015. Media repression continues in Egypt with the arrest of 30 journalists in April, preventing them from covering protests. Photo: Alisdare Hickson/Flickr

by Polina Kasparova, Research Assistant, Freedom of the Press

The coming year holds the possibility of both positive developments and troubling setbacks for press freedom worldwide.

Argentina’s new government has the chance to build a balanced media regulatory system, and Ukraine’s fledgling democracy could show its dedication to implementing media reforms. At the same time, Poland’s new ruling party is poised to continue its assault on independent journalism, and Ghana’s government has demonstrated an appetite for media interference in anticipation of this year’s election.

The following nine countries deserve special attention this year, as they near turning points that could determine the future trajectory of media freedom more broadly.

Shortly after his election in November, President Mauricio Macri issued a decree transferring regulatory power over the media to a newly formed agency with potentially heavy executive influence. The probusiness administration touted the move as a much-needed reform that would end the abuses of the previous government. Former president Cristina Fernández de Kirchner’s administration had an openly hostile relationship with the private media conglomerate Clarín, and attempted to break up its assets through legislation aimed at increasing competition. However, Macri’s unilateral changes to the regulatory structure have also raised concerns. In April, the Inter-American Commission on Human Rights held a hearing on the government’s actions at the request of various media-related organizations. With comprehensive new legislation in the drafting stage, it remains to be seen whether the Macri government is committed to genuinely impartial reform that incorporates the views of civil society.

Facing economic troubles, the Chinese Communist Party (CCP) has doubled down on efforts to control the media. In February, President Xi Jinping ordered media outlets to demonstrate complete loyalty to the party. In March, the government banned foreign companies from publishing content online in China without Beijing’s approval. In response to these worrying steps, journalists, activists, and even some party insiders have voiced their objections, often through social media. Censors have been quick to take down such posts, but not before their widespread circulation. With slower economic growth and market volatility expected to continue, repressive measures are likely to increase, potentially triggering more acts of resistance that threaten to upend the current order.

Continuing a pattern of harsh media repression, Egyptian authorities detained over 30 journalists in April, preventing them from covering protests against a deal to cede control of two Red Sea islands to Saudi Arabia. Two more journalists were arrested on May 1 when police raided the Journalists’ Syndicate in Cairo. Since seizing power in a 2013 coup, President Abdel Fattah al-Sisi’s regime has been harshest in silencing journalists and media outlets that are seen as sympathetic to the Muslim Brotherhood, which was branded as a terrorist organization, though many others have been arrested as well. As a result of government harassment and widespread self-censorship, Sisi loyalists have come to dominate the airwaves. Nevertheless, pushback has been growing in recent months even among high-profile journalists, leaving the government with a choice—tolerate greater diversity of opinion, or intensify efforts to retain control.

President John Dramani Mahama’s government has introduced new measures to prevent critical media coverage as it gears up for the November elections. In December 2015, the parliament passed a law that allows the National Media Commission to regulate media content and enforce standards on issues including defamation and protection of minors. Earlier that year, the Ministry of Communication stipulated that foreign video journalists must work in the presence of Information Services Department officials and submit their content to the agency before dissemination. The media environment has also grown more dangerous, with multiple assaults reported in 2015 and one journalist shot dead in September, possibly for his coverage of regional political tensions.

Rising hostility from right-wing Hindu nationalists has contributed to a more dangerous climate for the press. Earlier this year, a female television anchor received over 2,500 threatening phone calls after being accused of insulting a Hindu deity; the harassment was traced to members of a militant Hindu group with ties to the Bharatiya Janata Party (BJP) of Prime Minister Narendra Modi. The government has done little to extend protections to journalists or defend their rights, and has been accused of taking advantage of religious or nationalist controversies to promote its agenda. After a university student was arrested for shouting allegedly seditious slogans at a rally in February, the BJP announced plans for its own three-day program of public events to counter “separatism” and “political conspiracy.”

Iran’s moderates and reformists gained the largest number of seats in the parliament after this February’s elections and April runoffs, but they remain a few seats short of a majority. It is unclear whether their support will be enough to advance President Hassan Rouhani’s pledges to ease restrictions on journalists and freedom of expression in general. For the time being, the media are under pressure from hard-liners in the judiciary and security services. In April, four journalists received prison sentences ranging from 5 to 10 years for supposedly spreading propaganda against the state and undermining national security.

The newly elected Law and Justice (PiS) party has moved rapidly to assert control over the media. In December 2015, the parliament passed legislation giving the Treasury Ministry the power to appoint the heads of public television and radio stations. Senior officials at public media outlets, who faced likely dismissal, resigned in protest, and the European Union strongly criticized the law. Members of PiS indicated that this was only their first step in creating a “national media” that would be supportive of the government and free from dangerous foreign influences. Media outlets and press freedom organizations have pushed back, signaling growing tensions in the year ahead.

The government in Kyiv has passed a series of laws to advance press freedom since 2014, including measures to liquidate a censorship body and stiffen punishments for crimes against journalists. Their implementation will be a test of the new leadership’s effectiveness and its dedication to the cause of media independence. Meanwhile, journalists continue to face obstacles in carrying out their work, especially in rebel-held areas in the east. Russian-backed separatists maintain control of broadcasting centers in Donetsk and Luhansk and prevent the transmission of Ukrainian channels, instead disseminating Kremlin propaganda. Although violence has declined since 2014, journalists are still subject to threats and attacks, and are frequently denied access to newsworthy events.

With 92-year-old president Robert Mugabe’s current term set to end in 2018, members of his party, the Zimbabwe African National Union–Patriotic Front (ZANU-PF), have been vying to succeed him. As officials seek to control any reporting on the infighting, the government has escalated its attacks on the media. Last year, Itai Dzamara, a journalist and vocal critic of the government, was forced into a car in Harare and has not been seen since. Journalist Patrick Chitongo was sentenced to a year in prison for publishing an unregistered newspaper, and even staffers at state-owned media have been arrested for their reporting. In an April speech, Mugabe praised China’s censorship regime and alluded to plans to introduce more stringent monitoring of social media in Zimbabwe.