Citizens have long been excluded from policymaking, and they don’t like the results. 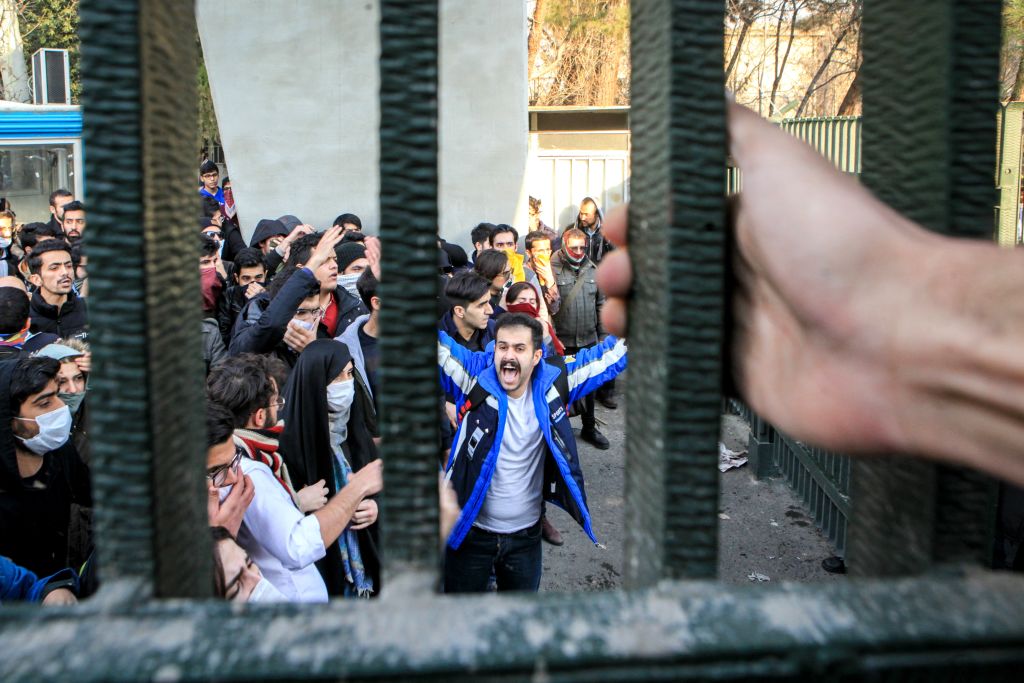 People gather to protest over high cost of living in Tehran, Iran on December 30, 2017. (Photo by Stringer/Anadolu Agency/Getty Images)

Citizens have long been excluded from policymaking, and they don’t like the results.

Six days of protests in cities across Iran have left dozens dead and hundreds arrested in what amounts to the most significant eruption of antigovernment sentiment since 2009. The demonstrations were initially focused on rising food prices, but they have quickly morphed into calls for the removal of supreme leader Ayatollah Ali Khamenei and an end to the Islamic Republic.

Despite tired claims by Khamenei that the unrest is being orchestrated by the country’s “foreign enemies,” the demonstrations are obviously organic, effectively leaderless, and spearheaded by working-class Iranians living outside the capital. In fact, it is increasingly clear that this uprising reflects a failure of governance. It is the public’s frustrated response to a regime that has excluded its people from civic and political life at home while keeping them isolated from the rest of the world.

An ailing economy despite the nuclear deal

Ordinary Iranians have not reaped the economic benefits promised by the government after it signed the nuclear deal with the international community in 2015. Nonnuclear U.S. restrictions are still in place, Iran remains locked out of the international financial system, and with the exception of a handful of companies like Total and Renault, most large international firms are reluctant to invest in the country’s unpredictable political and regulatory environment. While Iran’s economy has shown strong growth according to some measures, youth unemployment has also been on the rise, and soaring inflation is a serious concern.

It may be tempting to blame the remaining U.S. sanctions for Iran’s economic woes, but it was Khamenei himself who flatly rejected broader cooperation or normalization of ties with the United States when the nuclear deal was signed. Khamenei’s enduring hostility toward greater social and economic integration with the outside world is shared by his hard-line allies in the religious establishment and the Islamic Revolutionary Guard Corps (IRGC), both of which have amassed enormous wealth in Iran’s opaque, sanctions-era economy. Their stance contradicts the will of the electorate, which endorsed a second term for President Hassan Rouhani based on his pledges to improve relations with the West.

A veneer of democracy conceals an authoritarian core

The regime describes itself as a “religious democracy.” In reality, the system’s electoral processes and institutions are designed to obscure accountability for policy decisions made by the supreme leader and unelected institutions under his control. These include his administrative offices, the Guardian Council, the judiciary, and security services like the IRGC. Candidates for public office and all legislation, including the national budget, must be approved by the Guardian Council, and most reform-oriented candidates and initiatives are rejected. Rouhani’s most recent austerity budget, which increased spending for the IRGC and religious foundations, contributed to the public outcry.

In addition to a monopoly on political and military power, the supreme leader has at his disposal an estimated 95 billion dollars in unlawful property seizures from ordinary Iranians. These resources, managed by the Setad Organization, allow Khamenei to operate outside Iran’s elected political system, with no transparency or oversight even by the parliament.

Elected institutions do not have real legislative or law enforcement authority. Even elected municipal bodies, which have traditionally been outside the supervision of the Guardian Council, have come under arbitrary directives issued by the council. In recent years, the Guardian Council has unlawfully removed women and minorities from municipal councils despite vehement objections from the parliament.

This duality at the heart of Iran’s power structure provides a breeding ground for unchecked corruption. As one protester told a reporter: “We are here to tell someone, anyone, Mr. Government, whoever is responsible, the economic situation is bad!” And that’s precisely the problem: No one knows who is fundamentally responsible, who to talk to, and how to attain redress for the injustices and problems they face in their daily lives. Citizens and civil society face formidable obstacles in seeking accountability. Independent nongovernmental organizations and media are severely restricted. Aside from their participation in tightly controlled elections, which rarely translates into the desired policy outcomes, citizens have few avenues for input into politics and governance.

When protests become the only option

Iranian citizens are not able to effectively organize or take part in the political affairs of their country. They are denied the fundamental right to associate, the right to support candidates of their choice, and the right to a free and fair electoral process. Few citizens attempt to engage with policymakers in formal settings for fear of retaliation. Public officials provide little opportunity for consultation or communication with their constituents. As one activist told Freedom House, “such engagement is limited … and subject to strife between hard-liners and reformists within most ministries.”

The only stakeholders invited by lawmakers to offer input on policies are either religiously affiliated or have some sort of connection to the government. They are not bona-fide civil society organizations that represent the wide spectrum of constituencies in Iran. Activists and experts who do try to engage authorities through advocacy risk encounters with a deeply entrenched security state that has not hesitated to brutally stifle dissent. The penal code provides the government with sweeping authority to punish citizens for criticizing government officials or publishing news it deems “false.”

This helps explain why desperate citizens are now resorting to mass protest. They will not be easily swayed by familiar proclamations that the sources of their pain are in Saudi Arabia, the United States, or the United Kingdom. The supreme leader has a choice to make. Either he can order another vicious crackdown on the Iranian people, which could result in untold casualties and human rights violations, or he can finally respect the public’s demands for more political participation and peaceful democratic reform.