The region is a driving force behind annual declines at the global level. 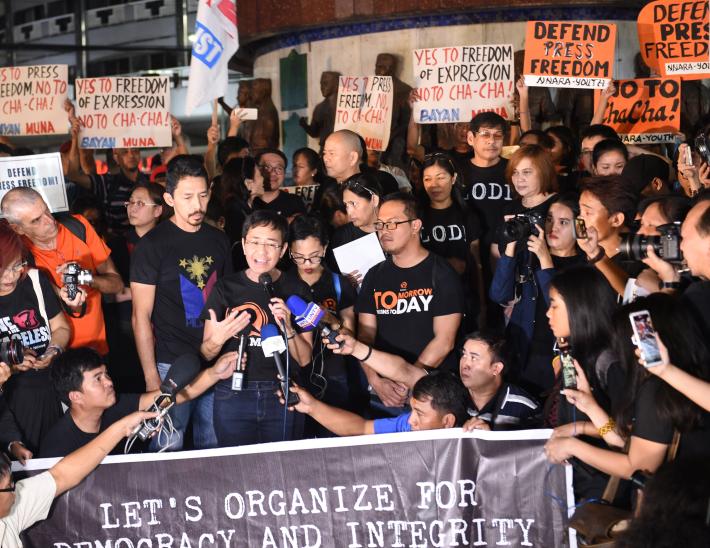 Maria Ressa, the CEO and editor of online portal Rappler, speaks during a protest on press freedom along with fellow journalists in Manila on January 19, 2018. Credit: TED ALJIBE/AFP/Getty Images.

The region is a driving force behind annual declines at the global level.

Global internet freedom has declined for an eighth consecutive year, according to Freedom on the Net 2018, and the negative trend was most evident in Asia. The region led the world in intentional internet disruptions, egregious criminal penalties for online activities, and violence triggered by online disinformation. Indeed, score improvements in Asia were hard to come by, as authorities in China, the world’s worst abuser of internet freedom, actively propagated their techno-dystopian model both at home and abroad.

The internet became less free in nine Asian countries during the past year, contributing to a global decline that affected 26 of the 65 countries under review. Only three countries in the region improved, and the scores of two remained unchanged. The majority of declines were related to issues including privacy, surveillance, violence, arrests, and prosecutions.

Sri Lanka’s four-point decline on a 100-point scale was the largest in the region. Cambodia and the Philippines both suffered three-point declines, with the Philippines falling to a status of Partly Free for the first time since 2012. Meanwhile, Bangladesh earned the largest improvement with three points, followed by Thailand, with a two-point gain. Asia, which had an average score of 52 out of 100, featured a wider range of country scores than any other region, from Japan, the only Asian country rated Free, at 25, to China, designated Not Free, at 88.

Officials in seven Asian countries deliberately disrupted internet connectivity during the report’s coverage period, compared with only five in the Middle East and North Africa (MENA), one in sub-Saharan Africa, and none in Eurasia, the Americas, or Europe. India, whose score declined to 43, has more internet shutdowns than any other country in the world. While only a few restrictions were reported in India in 2012, more than 110 were recorded in 2018 alone. Local and state authorities have argued that such disruptions are necessary to suppress rumors, maintain public order, or even prevent cheating on exams, but in practice they are often used to control the media narrative and the exchange of politically sensitive information online. Other countries where authorities intentionally restricted connectivity include Bangladesh, China, Indonesia, Pakistan, the Philippines, and Sri Lanka.

Social media and communication platforms were routinely blocked in Asia, though the region is second to MENA in this regard. Facebook, YouTube, WordPress, and SoundCloud, among other platforms, are all blocked in China, while Sri Lanka instituted a nationwide block of Facebook, WhatsApp, Instagram, and Viber for just over a week in March 2018 during an outbreak of communal violence. Pakistani officials restricted access to Facebook, Twitter, and YouTube for two days in the wake of protests that turned violent. Authorities in India, Indonesia, and Malaysia also blocked access to social media and communication platforms over the past year.

Prosecutions and incitement to violence

The world’s most draconian criminal penalties for online expression were imposed in Asia. Courts in Pakistan, which is rated Not Free, sentenced two users to death for blasphemy after they allegedly shared content criticizing Islam on WhatsApp and the prophet Muhammad on Facebook, respectively. Both convictions are being appealed. In Thailand, two users were sentenced for lèse majesté: one to 35 years in prison for 10 messages on a fraudulent Facebook account, and the other to 18 years for posting six Facebook videos. In Vietnam, the region’s worst performer other than China, an environmental blogger was sentenced to 14 years in prison, one of the harshest penalties ever imposed on a Vietnamese activist.

The score decline in the Philippines was due in part to three libel cases filed against online journalists and news outlets for their investigative reporting and critical coverage of the government. Even authorities in Japan, who normally refrain from prosecuting internet users for their posts, arrested five people for copyright-related offenses, and two of the five were sentenced to prison.

The region also leads in another disturbing category: outbreaks of violence triggered by disinformation and “fake news.” In Myanmar, Sri Lanka, India, and Bangladesh, the internet was used to spread disinformation that sparked violence against particular ethnic and religious groups. The most destructive example by far occurred in Myanmar, where the military and government have conducted a years-long propaganda campaign to build support for, defend, and deny their mass atrocities against the Muslim Rohingya minority. For example, on the government-run Information Committee Facebook page, images were shared of Rohingya women reporting sexual violence with the text “FAKE RAPE.” Other accounts with no explicit link to the authorities also spread hate and disinformation. One post called on readers to “pour fuel and set fire so that [the Rohingya] can meet Allah faster.”

In Sri Lanka, a country where the internet is designated Partly Free, online disinformation and rumors helped to provoke violence between members of the Sinhalese Buddhist majority and the Muslim minority in February and March 2018. One such rumor—that 23,000 sterilization pills had been seized from a Muslim pharmacist—spread across Facebook rapidly in 2018. During the communal violence, Facebook posts implored followers to “reap without leaving an iota behind” and “kill all Muslims, don’t even save an infant.” In a video shared on WhatsApp, an individual declared that “the sword at home is no longer to cut jackfruit so kindly sharpen that sword and go.”

Although the picture is mostly grim in Asia, there were a few positive developments. The dedicated #KeepItOn campaign advocated against internet disruptions in Asia, while the Software Freedom Law Centre deployed a tool to track such shutdowns in India. In South Korea, which suffered a score decline due to harassment and abuse aimed at women who promote feminist content online, over 30,000 people mobilized in May and June 2018 against the epidemic of “spycam porn” in the country. Finally, in Malaysia, a new government that took office in May promised a series of reforms meant to ensure freedom of expression and provide better internet access.

Despite these bright spots, however, internet freedom in Asia as a whole can be expected to continue its decline into 2019. Unless the trend is reversed in the years to come, the region is likely to drag the global internet down with it.

This article was also published in the Diplomat.