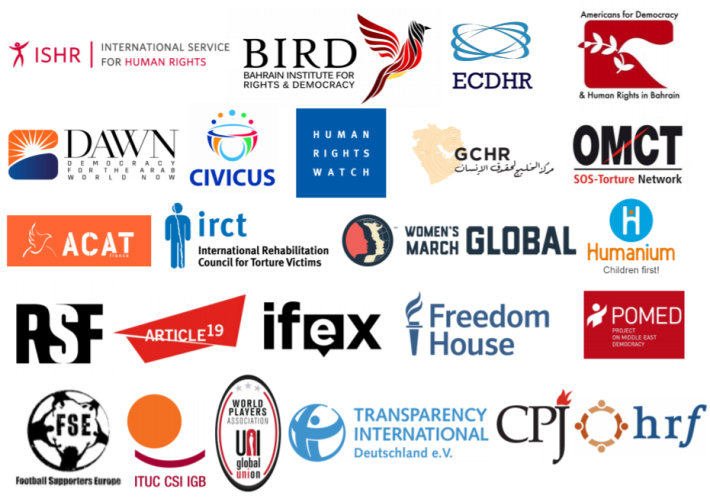 We, the undersigned organisations, are writing to you in your capacity as the new CEO of Formula 1 to reiterate our concerns about Bahrain’s use of the Bahrain Grand Prix to “sportswash” the country’s dire human rights record, in light of continuing government repression as well as abuses linked to the 2020 race.

10 Years of Repression Since the Arab Spring

In 2011 the Bahrain Grand Prix was cancelled amid international outcry over the Bahraini government’s brutal suppression of the country’s Arab Spring pro-democracy movement, in which security forces killed dozens and imprisoned thousands more for joining protests, as documented by the Bahrain Independent Commission of Inquiry.

F1 racing resumed in Bahrain the following year, and over the decade since, the human rights situation in the country has only worsened. Any semblance of democracy has been abandoned as the government outlawed opposition political parties, forcibly closed Bahrain’s only independent newspaper and severely curtailed freedom of assembly, forbidding unlicensed gatherings of more than five people. This has included suppressing protests against the Bahrain Grand Prix year after year. Human rights defenders, politicians, lawyers and other civil society figures face routine harassment and often jail time on spurious charges by Bahraini authorities.

Since Bahrain reinstated the death penalty in 2017, the state has carried out six executions and according to the Bahrain Institute for Rights and Democracy (BIRD) and Reprieve, at least 26 individuals currently face imminent execution, of whom 11 allege having been tortured.

In an interview with CNN during the Bahrain Grand Prix, your predecessor Chase Carey stressed that F1 is “proud to partner” with Bahrain and that this partnership was, in fact, advancing human rights issues in the country. Carey’s statement, which was made despite the findings of respected international human rights organizations, including Human Rights Watch and Amnesty International, on the deterioration of human rights in Bahrain, was a PR boon for Bahrain’s rulers.

In February 2021, as Bahrainis prepared to mark a decade since the 2011 uprising, arrests by security forces included at least 13 children, some of whom were beaten and threatened with rape and electrocution to coerce them into signing confessions. The youngest boy, who celebrated his 12th birthday in a prison cell, was arrested for joining protests against the November 2020 Bahrain Grand Prix. Four of these children were subsequently handed six-month non-custodial sentences over protest-related charges, including a seriously ill 16-year-old with severe sickle cell anaemia.

Another person arrested during the anniversary crackdown was Abdulhadi Mushaima, whose 21-year-old son Ali was the first person killed by police during the 2011 uprising and who has faced years of judicial harassment over his pursuit of justice for his son’s murder. Abdulhadi was eventually released from detention on a non-custodial sentence after being handed three months in prison for joining a peaceful protest in 2019. Nonetheless, his prosecution is indicative of Bahrain’s continued intolerance for dissent and persecution of peaceful protesters.

On March 11, 2021 members of the European Parliament overwhelmingly adopted a resolution condemning human rights abuses in Bahrain; the Greens-European Free Alliance bloc made explicit calls for EU member states “not to attend and participate in the upcoming Formula 1 Gulf Air Bahrain Grand Prix 2021,” an example of growing international concern over sports-washing.

In 2015, following Bahrain’s violent suppression of protests against the race, F1 adopted a human rights policy after arbitration with Americans for Democracy and Human Rights in Bahrain (ADHRB) that committed F1 to identify “any actual or potential adverse human rights impacts'' linked to F1’s activities or business relationships and “engage in meaningful consultation with relevant stakeholders.”

Despite this commitment, rights abuses linked to F1’s activities in the country have continued, while victims' appeals for restitution have gone unrealised. Among them is Najah Yusuf, who was tortured, sexually assaulted and sentenced to three years in prison after posting criticism of the Grand Prix on social media in 2017. After she was granted a royal pardon in August 2019 following an international campaign for her release, the UN Working Group on Arbitrary Detention (WGAD) declared her imprisonment to be “arbitrary” and recommended that Najah be accorded an “enforceable right to compensation and other reparations.” F1 pledged to raise her case directly with Bahraini authorities after her release.

Almost two years later, the WGAD’s recommendation remains unfulfilled and Najah has been fired from her public sector job over her time spent in prison. Her 17-year-old son, Kameel Juma Hasan, is facing over 25 years in prison stemming from his participation in political protests, in what Amnesty International has called a “reprisal against his mother” for speaking out about her ordeal. To date, there is no indication that F1’s promised interventions on her behalf have taken place.

Najah is not alone in facing reprisals after protesting against Formula 1. In 2017, Bahrain jailed family members of UK-based human rights defender and director of the Bahrain Institute for Rights and Democracy (BIRD), Sayed Ahmed Alwadaei, who had participated in the 2015 mediation with F1, in what the WGAD described as “acts of reprisal” for his human rights work in the UK.

Formula 1 has yet to respond to letters 30 MPs and 18 NGOs sent, before the November 2020 Bahrain Grand Prix, raising these cases. Such failure to respond violates Article 2(d) of F1’s human rights policy, which requires that F1 “engage in meaningful consultation with relevant stakeholders in relation to any issues raised as a result of our due diligence, where appropriate.”

The F1 world champion, Sir Lewis Hamilton, has stated that your organisation has a “consistent and massive problem” with human rights and pledged to work with victims to improve the situation in the country.

With this in mind, we urge you to:

Joint Letter: Prioritize Human Rights in US Policy with Bahrain

Joint Letter to EU Ahead of Meeting with Bahraini Delegation