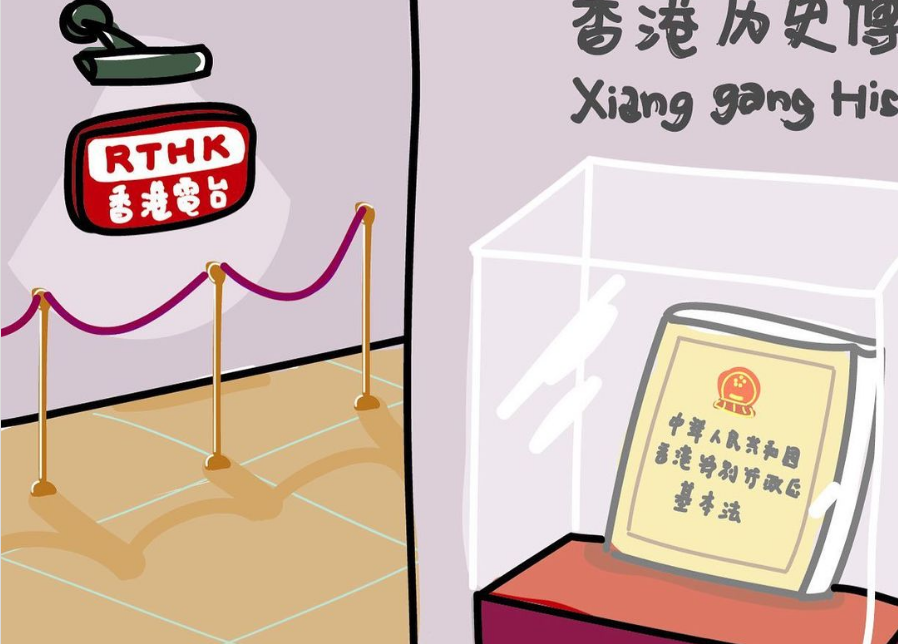 With ironic timing, the management at Hong Kong’s public broadcaster Radio Television Hong Kong (RTHK) chose May 3—World Press Freedom Day—to initiate a spate of actions that flew in the face of the service’s mission of providing impartial news coverage and a platform for free expression. Staff began deleting all episodes of past shows that were more than one year old from Facebook and YouTube, including several award-winning investigative programs that had garnered over a million views. The station then refused to renew the contract for journalist Nabela Qoser, effectively firing a reporter who had gained prominence for her tough questioning of local officials. The moves came just days after top executives axed a documentary—months in the making—that highlighted the hard-hitting journalism and innovative business model of the digital news outlets Hong Kong Free Press and Citizen News.

Not so long ago, any of these steps would have seemed unimaginable at the widely respected and fiercely autonomous broadcaster. Today, they are just the latest in a series of disturbing changes that are draining the editorial independence and watchdog journalism out of RTHK—a death by a thousand cuts that has accelerated over the past two months.

For journalists, news consumers in Hong Kong, and others familiar with RTHK, each development brings a renewed sense of pain and loss as another of the territory’s once renowned institutions becomes a shadow of its former self. But the fate of RTHK has more far-reaching implications, offering insights and warnings for anyone concerned about Hong Kong, media freedom, or Beijing’s growing influence beyond the borders of mainland China.

Not your average Chinese broadcaster

While the long-standing gap in press freedom between Hong Kong and the rest of China may be obvious, the stark contrast between RTHK and its mainland counterpart, China Central Television (CCTV), cannot be overstated. Whereas CCTV is supervised by the Chinese Communist Party (CCP) propaganda department, subject to tight editorial controls, and deployed as a key weapon in the party’s arsenal of repression against critics and perceived enemies, RTHK followed the model of the British Broadcasting Corporation (BBC), a publicly funded but editorially independent news service.

Established in 1928, RTHK today runs television channels in English, Mandarin, and Cantonese as well as seven radio stations. Its programs and documentaries have repeatedly won awards in Asia and beyond. The schedule has traditionally included political satire, investigative reporting, current-affairs talk shows, and cultural content. In surveys as recent as 2019, RTHK scored highest among the territory’s stations in terms of public trust, a reflection of the reputation it had garnered for credible, professional reporting, including on sensitive issues like the response of Beijing and the Hong Kong government to prodemocracy protests.

Precisely because of RTHK’s unflinching coverage of those in power, pro-Beijing officials have followed up on the passage of the National Security Law last year and the broader crushing of the prodemocracy movement in Hong Kong by moving to neutralize the broadcaster. What began as a government review and a series of isolated actions against individual journalists has snowballed into a full-scale overhaul of RTHK’s policies and culture.

A key turning point occurred in mid-February. After a government team published a detailed report criticizing the broadcaster’s management, veteran reporter Leung Ka-wing stepped down as editor in chief, six months before the conclusion of his allotted tenure. He was replaced by Deputy Secretary of Home Affairs Patrick Li Pak-chuen, a civil servant with no prior media experience. Other government bureaucrats soon joined Li on the management team.

Within weeks, three other senior RTHK employees resigned, and Li announced an unprecedented policy—that all programs going forward would need to be reviewed and approved personally by him. At least nine episodes have since been blocked from airing at the last minute, and at least one full series has been suspended. The topics of the canceled programs include a writer speaking about whales, a hip-hop band, university student unions, mask shortages during the pandemic, police handling of 2019 antigovernment protests, and forthcoming electoral changes imposed by Beijing.

Such heavy-handed and arbitrary interference from management can fuel self-censorship on its own, but in early April, a new policy added financial incentives: employees would have to foot the bill if executives decided not to air the content they produced, with the expenses taken out of their pay.

Even as RTHK granted less airtime to prodemocracy voices and government critics, particularly on Chinese-language programs, the broadcaster announced in late April that it would launch a new show hosted by Hong Kong chief executive Carrie Lam—to be aired four times a day—in which she would interview members of the handpicked Election Committee in the run-up to legislative polls scheduled for later this year.

For journalists who have built up a career’s worth of solid reporting, watching it being obliterated is heartbreaking. For Hong Kongers who have relied on RTHK as a credible news source, the loss is similarly palpable. And for businesses operating in the territory, the changes at the broadcaster raise questions about how and where government transgressions can now be investigated and exposed. But what has happened at RTHK also has implications beyond Hong Kong’s shores.

First, those in China who aspire to greater press freedom and more trustworthy media have looked to RTHK as an exemplar of what might be possible one day on the mainland. Its takeover by government operatives and its potential transformation into a government mouthpiece amounts to a demoralizing victory for Beijing’s authoritarian model of media control.

Second, unlike recent violent attacks on media outlets and journalists in Hong Kong, for which the government might plausibly deny responsibility, the gutting of the public broadcaster is clearly a deliberate government action. RTHK’s reduced editorial autonomy undermines any claims by Hong Kong officials that they still support media freedom and other democratic values, and foreign interlocutors can no longer take these assertions at face value.

Third, Hong Kong’s freedoms—including press freedom—are predicated not only on its own Basic Law, but also on international agreements and treaties. These include the Sino-British Declaration as well as the International Covenant on Civil and Political Rights, which China agreed could continue to be in force in Hong Kong after the handover, although the PRC itself has signed but not ratified it . The government takeover of RTHK is part of a broader attack on independent journalism in Hong Kong that if allowed to go unchecked will undermine the credibility of the international human rights system more broadly. To the extent that Beijing is a party to such agreements, the fate of Hong Kong should serve as a warning about the sincerity of its international commitments on other topics, ranging from climate change to intellectual property rights.

Fourth, as China-linked companies, entrepreneurs, and even state-owned enterprises have begun purchasing stakes or otherwise investing in media outlets around the world, the gutting of RTHK should give pause to any current or potential partners. It demonstrates how quickly a respected and independent outlet can be brought to heel, despite the objections of veteran staff, journalists, and the public. The experience also reinforces the importance of investment screening mechanisms and reasonable limits on foreign ownership, at least for broadcast media, which many Organisation for Economic Co-operation and Development (OECD) countries have in place.

Neither the journalist community nor average Hong Kongers are standing idly by as RTHK succumbs to government control. Some staffers have resigned rather than be forced to cooperate with the editorial shifts. Others are trying to navigate arbitrary redlines and continue to produce content in the public interest, including about developments at the broadcaster itself. Much of the information above has come from RTHK’s own reporting, or from employees quietly leaking details to other news outlets.

Elsewhere in Hong Kong, citizens and journalist associations have taken steps to push back. Netizens scrambled in early May to archive past programs on a blockchain platform before they were taken down. On May 6, RTHK won a Human Rights Press Award an award for a documentary about the July 2019 Yuen Long mob attack on protesters, with the organizers rejecting the outlet’s retroactive efforts to withdraw from the honor and recognizing the work of journalist Bao Choy, who was convicted and fined last month for using a traffic database in her research.

Despite these principled stances, preserving remnants of RTHK’s editorial independence and investigative reporting will be an uphill climb. Without greater international pressure or a course correction on the part of top Hong Kong officials, RTHK seems likely to become either a government mouthpiece or a bland, toothless outlet focused strictly on entertainment and human interest stories. In any case, if the recent damage is allowed to stand, Hong Kong will have lost a true treasure.

Sarah Cook is research director for China, Hong Kong, and Taiwan at Freedom House and leads the editorial team for the China Media Bulletin. This article was also published in the Diplomat on May 25, 2021.