The president has touted his reform agenda, but religious persecution continues in practice. 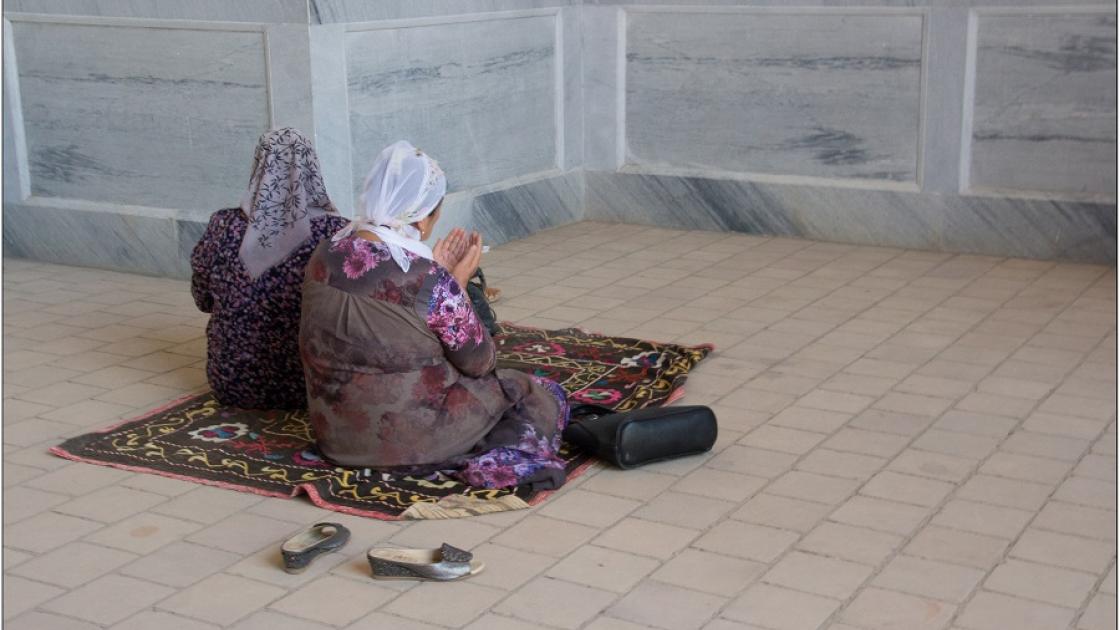 Women pray at a mosque in Samarkand. (Flickr/Maureen Barlin)

The president has touted his reform agenda, but religious persecution continues in practice.

Since the 2016 death of Uzbekistan’s longtime autocrat, President Islam Karimov, his successor, former prime minister Shavkat Mirziyoyev, has initiated a series of economic, judicial, and legislative reforms and ordered the release of dozens of political prisoners. He also moved swiftly to improve Uzbekistan’s frosty relations with neighboring countries and liberalize the hermetic economy to attract foreign investors.

However, the new leadership has been too slow in lifting draconian religious restrictions imposed by the previous administration, and pious Uzbeks continue to be charged with extremism for openly expressing their beliefs.

Karimov, who had ruled the country since before the collapse of the Soviet Union, exploited the struggle against terrorism to justify mass arrests of observant Muslims. As part of his anti-Islamic campaign in the predominantly Muslim country, Karimov imposed quotas on the annual Hajj pilgrimage, banned some religious garments and forms of appearance, restricted Islamic education, and jailed thousands of people for their alleged links to Islamist militant groups.

Critics accused the regime of politicizing its counterterrorism strategy and using it to consolidate power and stifle legitimate dissent. The complete lack of religious and civil liberties, together with a stagnating economy, forced thousands of Uzbeks to flee the country. Separated from their communities and social networks, some of these exiles, particularly young men, did turn to radical forms of Islam and joined terrorist groups. The vast majority, however, left their homes only to find a better life abroad and avoid state persecution.

Despite Mirziyoyev’s pledge to “build a democratic state and a just society,” Uzbek authorities have taken conflicting steps with respect to religious freedom in the country. The new president ordered the removal of 16,000 names from a blacklist of up to 17,000 people suspected of religious extremism or membership in banned and unregistered religious groups, but Uzbek authorities last year added new restrictions for religious communities seeking legal status. Moreover, hundreds of religious Uzbeks remain imprisoned on vague charges of extremism, and law enforcement officials continue to systematically detain people suspected of belonging to unregistered religious groups. In September 2018, police arrested eight conservative Muslim bloggers who criticized Uzbekistan’s repressive religious policies and called for Islam to play a greater role in Uzbek society. Around the same time, an Uzbek imam was fired after urging Mirziyoyev to lift a decades-old ban on religious symbols such as hijabs and beards.

In addition, human rights activists and journalists report that Uzbek security forces still use torture to extract forced confessions from people accused of extremism. Last summer, the Tashkent City Court convicted five people of being members of the banned Islamist organization Hizb ut-Tahrir, despite their claims that their confessions were given under torture. While Mirziyoyev issued a decree prohibiting the use of torture to extract confessions and the admission of such confessions as evidence in court proceedings, torture and other ill-treatment remain endemic in Uzbek prisons and detention centers. Uzbekistan has still not ratified a supplement to the UN Convention against Torture that would enable the International Committee of the Red Cross to conduct independent prison monitoring in the country.

During his first address to Uzbekistan’s parliament in 2017, Mirziyoyev extended a hand to exiled citizens and guaranteed them protection upon their return. Nevertheless, renowned writer Nurullo Otahonov was arrested at Tashkent airport after ending his self-imposed exile in September 2017. More than a year after Karimov’s death, Uzbek authorities charged Otahonov with extremism and public calls to overthrow the government for publishing a book that was critical of the late president and his repressive policies. Otahonov’s arrest caused an immediate uproar among human rights activists and fueled doubts about the new leadership’s promises. Four days after his arrest, Otahonov was released from jail, but police did not tell him why he had been let go or whether the charges were dropped.

Brothers Abrol and Shukhrat Dusmukhammedov, who were arrested upon their return to Uzbekistan in May 2018, were not so lucky. They were sentenced in October to six and a half years in prison for extremism. Both men left the country five years ago and hoped to restart their life in Uzbekistan after hearing Mirziyoyev’s remarks about Uzbek exiles. In another such case, Dilafruz Zaripova, who moved to Turkey to avoid religious persecution in 2013 and tried to go back to Tashkent in June 2018, was arrested by Uzbek authorities while trying to get through passport control.

The dangers of premature praise

Mirziyoyev’s attempts to reform Uzbekistan have been applauded by a number of democratic leaders, including members of the Trump administration. The new ruler of Central Asia’s most populous country has embraced anticorruption reforms, acknowledged torture, and publicly recognized the realities of forced labor in the cotton harvest.

However, Mirziyoyev’s main focus is on boosting Uzbekistan’s stagnating economy. While he has stepped up the pace of economic reforms, he has remained cautious about implementing broader improvements to political rights and civil liberties. Moreover, the country’s bureaucratic structures and security services have been slow to adapt to Mirziyoyev’s apparent new direction, and religious Uzbeks continue to be harassed. It is also important to remember that Mirziyoyev himself is a product of Karimov’s autocratic regime, and his deeds, not his words, should be used to gauge the country’s progress.

Democratic states should take care to avoid rewarding an authoritarian government for limited reforms that serve to enrich it without laying the foundations for real political or individual freedom—a scenario that has been repeated many times since the end of the Cold War. Instead, they should press Mirziyoyev to tackle the full spectrum of Karimov’s abuses, including religious persecution, and recognize that long-term security and prosperity depends on the ability of all citizens to enjoy their fundamental rights.