For the past month, the Chinese authorities have engaged in a sweeping crackdown on human rights lawyers and the broader “rights defense movement” they represent. At last count, over 250 attorneys, law firm staff, family members, and activists across China had been detained or summoned for questioning since July 9. At least 20 remain in custody or are missing. Several of those being held face serious, politically motivated charges that could result in long prison terms. 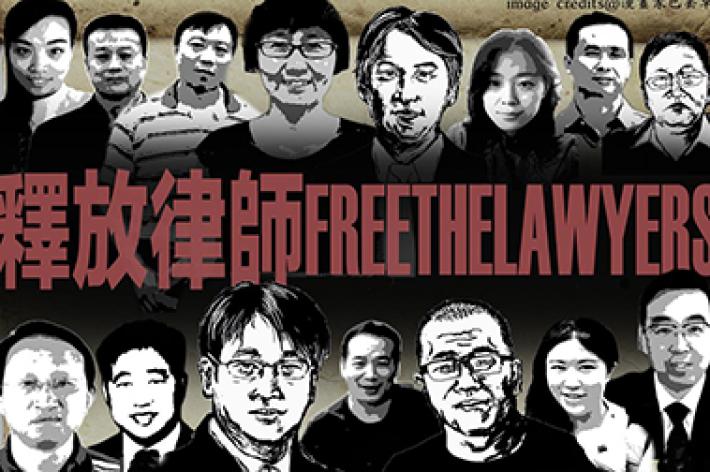 This article also appeared on The  Diplomat and Freedom House’s China Media Bulletin on August 12, 2015. 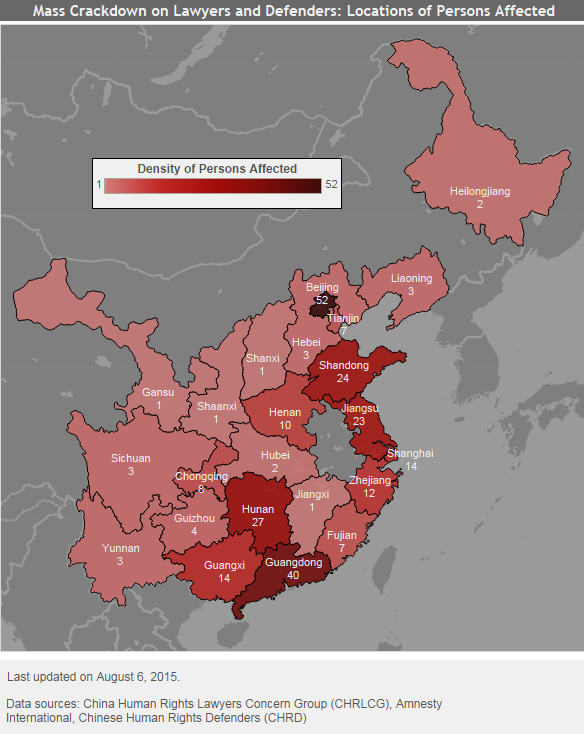 For the past month, the Chinese authorities have engaged in a sweeping crackdown on human rights lawyers and the broader “rights defense movement” they represent. At last count, over 250 attorneys, law firm staff, family members, and activists across China had been detained or summoned for questioning since July 9. At least 20 remain in custody or are missing. Several of those being held face serious, politically motivated charges that could result in long prison terms.

Much commentary inside and outside China has, understandably, focused on the campaign’s negative impact on the rule of law. But the assault on this community of attorneys and the manner in which it has unfolded also have important implications for media and internet freedom.

Some media-related features of the crackdown have been relatively predictable, following the Communist Party’s usual playbook for persecuting civil society activists. First, in a tactic that has been termed “cyberdisappearance,” the names of several detained lawyers were quickly rendered “sensitive,” meaning online searches for them now result in error messages or sanitized lists of links. Second, on July 14, censorship officials directed all websites to use only “authoritative” official sources in their reports about the lawyers’ detention, and to avoid reposting news from “non-standard” sources. Third, in a Mao-era practice that has been revived under President Xi Jinping, the national broadcaster China Central Television aired the forced confessions of at least two attorneys.

But three other aspects of the crackdown represent a worrisome escalation of the Communist Party’s suppression and manipulation of information.

1. More aggressive smear campaign on state media: As in other authoritarian settings, the detention of civil society activists in China is often accompanied by efforts to discredit them and their cause via state media. But the vigor with which Communist Party–controlled outlets are now attempting to vilify the rights defense movement goes beyond such run-of-the-mill defamation. The articles are more numerous and frequent, including not only news items, but also anonymous editorials and contrived “expert opinion” pieces. And the lawyers are smeared with more extreme language, including terms like “major criminal syndicate,” “seamy,” “sinister,” and “shrewish.”

The coverage has been supplemented with manipulative use of video footage and the creation of sophisticated infographics and cartoons. In fact, the demonizing nature and scale of the media blitz are reminiscent of Mao-era political campaigns, or more recent full-scale crackdowns on popular movements such as the 1999 ban on the Falun Gong spiritual group. This may not be coincidental, as many of the detained lawyers had represented Falun Gong clients.

2. First WeChat arrests: China’s human rights lawyers have been avid users of Tencent’s WeChat and similar instant-messaging platforms—including QQ groups, another Tencent service, and Telegram, developed by Russian entrepreneurs. These tools allow for the speedy sharing of information within a closed circle of contacts and are less heavily censored than more public platforms like the Sina Weibo microblogging service. They have allowed rights defense lawyers to connect with victims of abuse who need legal counsel, share advice on sensitive cases, and promote petitions on behalf of ordinary citizens and fellow lawyers who face official harassment.

Although the evidence against the detained attorneys remains unclear, high-profile reports from party mouthpieces like People’s Daily have adopted an incriminating tone when describing the lawyers’ use of WeChat and similar platforms for coordination. If such activity forms the basis for future convictions, these would be the first known cases of individuals being imprisoned for sharing political or social content on WeChat. Separately, Telegram—whose “secret chat” feature enables encrypted exchanges of information—suffered a major denial-of-service attack that hampered its Asia-Pacific services during the first days of the crackdown, and was subsequently blocked in China.

3. Assault on internet activism itself: While the criminalization of online speech in China is not new, the wholesale demonization of using the internet for social activism is exceptional. A central focus of the accusations made against the human rights lawyers has been their use of social media and other online tools to challenge official versions of events, share images of small-scale protests that then garner wider attention, raise funds from the public, or build popular support for their clients in an effort to gain judicial sympathy.

Given the Communist Party’s political influence over the judiciary, lawyers’ use of such tactics has often proven crucial in securing an additional measure of protection—and occasionally freedom—for their clients. Indeed, several of the lawyers and activists who remain in detention played key roles in many online campaigns that made national and international headlines in recent years, sparking public debate about rights issues ranging from sexual harassment and religious freedom to police brutality, and occasionally winning government concessions.

The escalation surrounding the rights defense crackdown fits a broader pattern in which the Communist Party under Xi Jinping has been closing previously available space for civil society, while imposing the party line more forcefully as the dominant media narrative, both online and off.

Such actions have ramifications far beyond the legal community. The potential persecution of activists for WeChat communications could have a chilling effect on the application’s hundreds of millions of users in China. Meanwhile, the wide swath of citizens previously defended by the detained lawyers will find it terribly difficult to uphold their right to free expression. Even if competent attorneys are courageous enough to take the places of their jailed colleagues—a likely scenario given the movement’s past resilience—they will face new limits on how to defend clients and mobilize support for their release or protection from abuse in a dramatically lopsided legal system.

The crackdown on human rights lawyers is truly a step backward for media freedom and the ability of all Chinese citizens to impart and receive information that is critical to their well-being and life decisions, the quality of their country’s governance, and the long-term vigor of their society.