How Poland’s Government Set Out to Conquer a Free Press

A new Freedom House report examines the Polish leadership’s brazen efforts to exert partisan control over the media in a lynchpin European democracy. 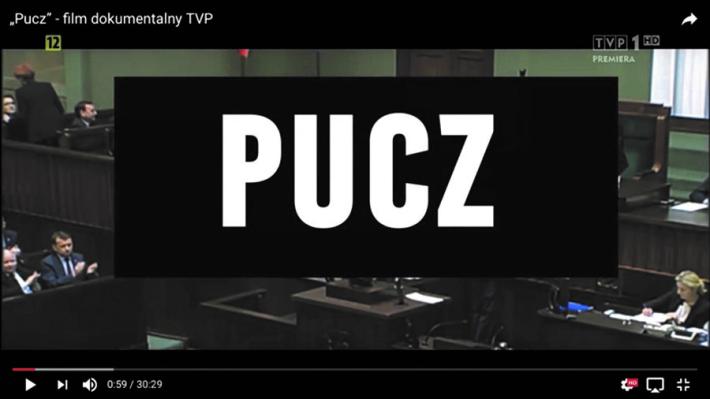 A new Freedom House report examines the Polish leadership’s brazen efforts to exert partisan control over the media in a lynchpin European democracy.

On January 15, 2017, a documentary aired on one of Poland’s most popular television outlets, the public channel TVP1. Called Pucz (Coup), the half-hour piece recounted tumultuous events that played out in the Sejm, the country’s lower house of parliament, a month earlier, when journalists and opposition figures protested new regulations proposed by the conservative ruling party, Law and Justice (Prawo i Sprawiedliwość, or PiS), that would have restricted reporters’ access to lawmakers and the parliament building.

The documentary pitted PiS’s leader, Jarosław Kaczyński, against a rabble of “anarchist” protesters, and depicted the opposition’s peaceful sit-in in the parliament’s plenary chamber as “an attempt to take over power.” By cutting to footage of burning tires in Kyiv’s main square, it evoked direct and unfavorable comparisons between the opposition protests and Ukraine’s 2013–14 Euromaidan uprising, while presenting Kaczyński as cool, collected, and bent on a peaceful resolution to the turmoil.

As a new Freedom House report explains, the airing of the film on public television was a worrying reflection of the broader media environment in Poland. Since coming to power in 2015, PiS has systematically sought to emulate Hungary’s illiberal turn by capturing state institutions, including the public broadcaster and the national media regulator, and transforming them into politicized mouthpieces that parrot PiS’s positions and ideology.

In December 2015, PiS introduced legislation that undermined the National Broadcasting Council (KRRiT), which is empowered under Poland’s constitution to regulate broadcast media and oversee public radio and television. The new measure terminated the KRRiT’s board members and temporarily shifted its responsibilities for management and appointment of public media personnel to the treasury minister. Protesting the December law, the directors of a number of public media outlets resigned, and they were quickly replaced by PiS acolytes.

The KRRiT was completely circumvented in June, when the PiS-dominated Sejm passed legislation creating a new National Media Council. While the KRRiT is formally nonpartisan, three PiS lawmakers sit on the new council’s five-member board. With the media watchdog firmly under PiS’s thumb, and with former PiS lawmaker Jacek Kurski installed as the head of Polish public television, the ruling party is free to broadcast overtly partisan programs like Pucz.

This sort of manipulation is now a familiar story. Beginning in 2010, Hungary’s media environment was similarly neutered as the populist government of Prime Minister Viktor Orbán made abrupt legislative changes and exerted pressure on private outlets. In Russia, state-controlled television stations have long used “documentaries” to smear the Kremlin’s political opponents. Even in the United States, the Republican leadership of the Senate recently attempted to limit media access to lawmakers in the halls of the Capitol.

With freedom of the press under assault around the world, Poland’s friends and allies should redouble their efforts on behalf of media independence in the country, before any further damage is done. The PiS government’s moves to capture the media sector should be included in the larger EU-Poland dialogue on the rule of law, as well as in bilateral discussions between Poland and the United States. Media freedom is a central pillar of any democratic society, and a major breakdown in Poland’s democracy would deal a serious blow to the peace and freedom of Europe as a whole.

For more information, read the new Freedom House report by Annabelle Chapman: Pluralism Under Attack: The Assault on Press Freedom in Poland.